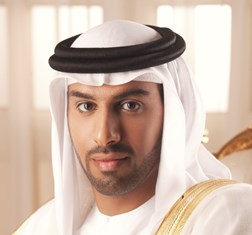 Sheikh Mohammed Bin Faisal Bin Sultan Al Qassimi is a graduate of business administration and accounting from Webster University and a member of the CMA and the Society of Technical Analysts of the UK. He established MANAFA LLC in 2003, a holdings company and investment house with a significant presence in the Middle East. Since its inception, the group has made a rapid expansion in the markets where it operates. Sheikh Mohammed also holds key directorship and senior positions at various business groups and associations, including the Italian Chamber of Commerce in the GCC and the UAE.

Share on:
Sharjah continues to ensure it provides a stable environment and compelling incentives to encourage international and local firms to be based in the Emirate.

What recent economic and market trends have you noticed in Sharjah?

The UAE’s rise as one of the world’s most productive oil producers, coupled with its success in its non-oil sectors, have turned it into the Middle East’s second-largest economy and one of the most open in the world. Improving oil prices, narrowing deficits, and continued public spending are expected to support economic growth averaging 2.5% across the GCC in 2020, according to Moody’s Investors Services. Sharjah’s diversified economy, with no single sector comprising more than 20% of GDP, has helped cushion the local economy from oil price volatility. We anticipate GDP growth to accelerate and provide support for the residential market, as regional economies adapt to the new norm in oil prices, Dubai diversifies in line with its economic diversification strategy, and infrastructure spending continues ahead of Expo 2020.

What are some of the biggest challenges investors in Sharjah are currently facing?

The UAE has proactively exerted efforts to be at the forefront by developing key mechanisms that ensure its economy remains stable in uncertain times. Sharjah continues to make steadfast progress in its economic activity with significant stability, which gives investors greater confidence. The Emirate has government-backed initiatives to encourage global firms, SMEs, and local start-ups to locate here. The creation of these new free zones forms are part of a wider strategy to help prepare Sharjah’s economy for Industry 4.0 by attracting innovative, knowledge-led ventures to Sharjah. MANAFA has not faced any challenges in Sharjah; in fact, the Sharjah Real Estate Registration Department registered a 46% increase in the number of real estate transactions during the first six months of the year. It also announced a 37.2% increase in the value of real estate transactions made in 3Q2017, according to global property consultancy Cluttons.

How is increasing digitalization and AI transforming business operations in Sharjah?

The region conducts annual technology week, through GITEX, announcing numerous new products and services. The technology event sees over 100,000 visitors gathered through the five-day tech week, which happens twice a year. The main factor that has highlighted the focus on digital transformation has been the aggressive push from regional governments to adapt new technologies such as AI. According to a report released by PwC earlier this year, the economic impact of AI adoption on GCC economies is estimated to reach roughly USD227 billion by 2030. AI is expected to contribute USD135.2 billion or 12.4% of GDP in Saudi Arabia by 2030, USD96 billion (13.6% of GDP) in the UAE, and USD45.9 billion (8.2% of GDP) for other GCC countries. The average annual growth rate of AI’s contribution to the GCC is expected to range between 29 and 34%, with the UAE seeing the highest growth rate at 33.5%.

As 2019 has been declared the year of tolerance, how would you assess the ways businesses in Sharjah are reacting to initiatives to improve diversity and inclusion?

The move will highlight the UAE as a global capital for tolerance, via its various legislative and policy-oriented goals to enhance the role of the country in instilling the values of coexistence and peace in local, regional, and international communities. Over the years, the country stands united and recognizes its initiatives to advance tolerance and peace while countering intolerance and violence around the world. Sharjah has been supporting the initiative as it strongly believes in promoting diversity across business, strengthening government roles to encourage and promote tolerance among young people, and prevent them from fanaticism and extremism. They are the future of the country and the next generation of leaders.

What are your main goals and objectives for 2019?

2019 is expected to be challenging, yet the government’s support through various legislation that, for example, ease entry visas and foreign ownership by the UAE cabinet will most likely lead to additional demand in the UAE property market.