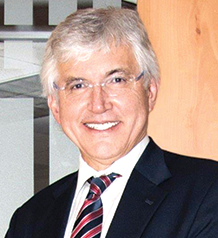 Ramiro Crespo graduated with a Master’s degree in Latin American and economic development from Georgetown University. He is currently Partner and Principal at Analytica. He joined Analytica after working as Vice-President of Corporate Finance at ING Bank Ecuador for nine years. He has worked as a consultant in restructuring, mergers, and acquisitions, and has served at Citibank, National Westminster Bank, and the Inter-American Development Bank, among others.

What have been the biggest successes of the past year?

Issuing $2 billion in debt and bonds was a major success for the country. Ecuador defaulted in 2008, and therefore reclaiming the market proved difficult. It may be also highly beneficial to the private sector by ultimately allowing it to issue in international markets.

How would you assess cooperation between the public and private sectors?

As additional infrastructure projects and power plants are set to come online in 2016 and 2017, a national surge in utilities will follow. And given that the government faces a liquidity shortage, the public sector understands that it cannot undertake these projects alone. The government is therefore inviting private players to combine forces on key infrastructural projects. This will take some time, however. Ecuador is seeking to attract the private sector into such initiatives and should the business climate improve we may register a measure of progress on this front in late 2015 or 2016.

How can Ecuador effectively attract higher levels of FDI?

If political noise and the economic risks subside, the pricing environment in Ecuador would improve across many areas of the economy, such as banking and real estate. Less controversy results in more foreign investment. To improve foreign investment we should open up areas of the country, such as the mining sector. Ecuador has significant mining potential but we lack the right incentives. Other Andean countries that have more or less the same mining potential have greater incentives for investment, and Ecuador needs to catch up. Ecuador is attempting to tax mining profits before the mining sector is actually generating any, which is premature. The mining sector is unwilling to make substantial investments because it is concerned that once they are made, Ecuador will change the rules of the game. The government should also encourage investments in certain areas such as electricity and ICT, for example. We also should be working to initiate discussions with Facebook to reach an agreement—as Colombia and Panama have done—in terms of improving the connectivity of Ecuadorians to the internet. We have to eliminate the 5% tax on remittances abroad. Before investing, people think about how that 5% tax is going to effect or change the investment or return they are expecting. The only reason we have a tax on the money sent abroad is to keep the currency locally to stimulate economic activity. But if country risk is mitigated, the 5% remittance tax is eliminated, and the investment climate is improved, foreign investment will increase as will export-related businesses, and there will be plenty of dollars in the country without having a tax to stop money from going overseas.

What factors already make Ecuador an attractive destination for investment?

The Ecuadorian economy is on the rise. Since 2001 we have had a long period of economic stability. Over the past decade there has been significant growth in the middle class. Ours is a small market—we cannot compete with Colombia and Peru in terms of market scale, but middle class growth provides a good market for small businesses. Multinational companies coming to Latin America tend to seek a broad regional footprint, which provides a good opportunity for Ecuador. There has been some pent up investment that has not entered Ecuador for certain reasons, and now is the time to do so. Mergers and acquisitions that we have seen in Ecuador have been a positive sign that there are opportunities and prices ratios are favorable. Ecuador is not prohibitively expensive, and can serve as an entry point to the entire region. Also, under the assumption that we are set to maintain the dollarization regime, this would be a good environment for companies to keep investing in. If you consider the largest insurance companies in Ecuador, four out of five are multinationals.