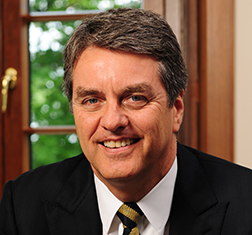 Roberto Azevíªdo is the sixth Director-General of the WTO. His appointment took effect on 1 September 2013 for a four-year term. In February 2017, WTO members reappointed him for a second term, which began on 1 September 2017. Ambassador Azevíªdo holds a degree in electrical engineering from the University of Brasilia. He subsequently attended the ‘Instituto Rio Branco’, the graduate school of diplomacy run by the Brazilian Ministry of Foreign Relations. He joined the Brazilian Foreign Service in 1984. His first diplomatic posting was to Washington in 1988. He subsequently served in the Brazilian embassy in Montevideo before being assigned to the Permanent Mission of Brazil in Geneva in 1997. He served on WTO dispute settlement panels and, in 2001, he was named head of the Brazilian Foreign Ministry’s Dispute Settlement Unit where he remained until 2005. During his tenure he acted as chief litigator in many disputes at the WTO. From 2006 to 2008 he was Vice-Minister for Economic and Technological Affairs at the Foreign Ministry in Brasilia.

Share on:
"The Trade Facilitation Agreement (TFA) is the first multilateral trade agreement concluded since the WTO was established 22 years ago."

What impact will the recently signed Trade Facilitation Agreement have on Oman and the GCC region?

The Trade Facilitation Agreement (TFA) is the first multilateral trade agreement concluded since the WTO was established 22 years ago. This is the biggest trade reform in a generation. Earlier in 2017, Oman deposited its instrument of ratification alongside Rwanda, Chad and Jordan, allowing us to reach the number of ratifications required for the TFA to enter into force. This deal seeks to expedite the movement, release and clearance of goods across borders, cutting trade costs and red tape. According to a WTO study, once implemented the TFA could reduce the time needed to import goods by over a day and a half and to export goods by almost two days. This agreement also broke new ground in the way it was designed. It provides for the necessary practical support to help members with their implementation. We are working with a range of donor members and partners to mobilise that support. I have no doubts that the implementation of the TFA can help complement the reforms carried out by Oman within the framework of the Vision 2020 strategy. Full implementation of the TFA could reduce trade costs in Oman by up to 15.8 per cent — which can help many more Omani companies do business abroad, especially the small and medium-sized enterprises. It can also help to streamline the trade flows and cut transaction costs in the region and beyond.

Given that Oman wants to become a logistics hub by 2040, what efforts can the WTO provide to ease this process?

The WTO offers a unique platform for Oman to put their trade issues and priorities on the table and work to push them forward. Indeed, I think that the organization can play an important role to help the country reduce its trade costs; boost its competitiveness, diversification and participation in global trade in many ways. The WTO’s Trade Facilitation Agreement is very significant. Oman is also part of the Information Technology Agreement, which eliminates tariffs on a range of IT products. In addition, Oman is working to join the Government Procurement Agreement. Besides its economic significance, Oman’s participation in these deals shows the country’s commitment to the multilateral trading system, as well as a robust vision for the country’s future. Indeed, at Oman’s Trade Policy Review in 2014, WTO Members lauded the continued commitment of the country to the multilateral trading system and commended Oman for the reforms undertaken by His Majesty’s Government to diversify the Omani economy. I hope that Oman will continue to take full advantage of the forum that the WTO provides.

Given the necessity to diversify its economy, what measures should Oman take in order to secure more trade agreements?

Trade negotiations are never easy. They require parties to be open-minded, flexible and creative—as well as ambitious and pragmatic—to find common ground and create win-win results. I think that Oman has displayed many of these qualities during the negotiations of their WTO membership. The country joined the WTO in 2000, after a process that lasted for around 4.5 years. In fact, the country’s decision to enter the WTO sent a strong signal to the global community that Oman is committed to this framework of global trade rules that provide stability, predictability, and transparency, which are vital ingredients for doing business across borders. The country should seek to build on these qualities—and on its position at the WTO—to continue negotiating new deals and benefit its citizens.

Is the WTO expecting to have any major tariff changes for 2018, and how would they impact Oman and the GCC region?

I don’t anticipate any major tariff changes in 2018. However, this does not mean that work on those fronts is not ongoing. For example, there are some regional trade agreements being implemented, helping to reduce tariffs in some parts of the world. Also, for some sectors, like information technology, tariffs are going down due to the expansion of the WTO Information Technology Agreement, which was agreed in 2015. Nonetheless, we must remain vigilant to potential risks – including the possibility that protectionist rhetoric translates into trade restrictive actions. While tariffs remain a key issue in trade policy, there is a lot of focus on other areas as well. At the WTO, for example, members are talking about various issues, including how to help SMEs enter global trade flows, how to facilitate investment, or how to ensure that the benefits of e-commerce are shared more broadly. Like reducing tariffs, these issues have a great potential to foster trade and development.

Regarding Oman and the GCC region, what are the WTO’s main objectives for 2018?

There are many uncertainties in the global economy. In 2016 world trade grew at 1.3%. This was the slowest pace since the financial crisis. For 2017, WTO economists have issued a strong upward revision to their forecast, which is now projected at 3.6%. This is welcome news. However, substantial risks remain in place and could easily undermine any trade recovery. Against this challenging background, I think that the need to continue strengthening the multilateral trading system. A strong, rules-based trading system is essential for global economic stability. An important part of these efforts is to deliver new reforms and resisting the creation of new barriers to trade. We have shown that meaningful outcomes can be achieved at the WTO — and that is what we must continue doing. Our next Ministerial Conference is in Buenos Aires at the end of 2017 — and that could be an opportunity for progress. I look forward to working with Oman to strengthen the WTO and deliver further results to benefit the country and the region, and ensure that trade can contribute to Oman’s economic and development goals.