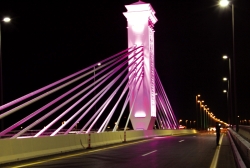 Born in 1961, Kamil Aliyev entered the Azerbaijan Civil Engineering Institute in 1978 and later continued his education in the All-Union Road Scientific Research Institute in Moscow. Between 1988 and 1991, he worked in the Azerbaijan Architecture and Engineering Scientific Research Institute, and later worked at Azeravtoyol, before joining AzVirt as General Manager in 1995. He is currently the Director of AzVirt LLC and the author of five inventions and three patents.

Share on:
What have been some of your major achievements over the past year? The project of the highway leading to Baku Flag Square was completed in May 2012. We also completed […]

What have been some of your major achievements over the past year?

The project of the highway leading to Baku Flag Square was completed in May 2012. We also completed the construction of a new international airport in Gabala, with a runway length of 3,600 meters. This will be very important for the region, which is rich with summer and winter tourism resources. We have also built a highway from the airport to Gabala. We hope to draw many tourists from different countries in the future. In addition to this, we have built a new runway at a length of 4,000 meters and reconstructed the existing one at Heydar Aliyev International Airport. Besides these huge civil construction projects, several new road projects around Baku were implemented by AzVirt.

Do you have any plans for further international expansion?

We generally concentrate our activity on Eastern Europe and the Balkans. We started a highway construction project in Serbia, and we have also been awarded a design-and-build project in Romania, and construction work is planned to start in the near future.

What new projects do you have in the pipeline in Azerbaijan?

The first section of the road from Bilgah to Sumgait (a 14-kilometer stretch), including one tunnel, one bridge, and one underground pedestrian passage, is completed. The second section of the project (from kilometer 14 to kilometer 42) is expected to be finished in 2015, and will consist of six traffic lanes and 12 bridges. The main reason for the construction of this motorway is to join the northeastern part of the Absheron peninsula with the Baku-Guba highway leading to the north via the Mardakan-Bilgah-Novkhany-Sumgait motorway, without entering Baku city. Other projects are the Buzovna-Mardakan-Gala and Gala-Pirallahi routes, at which construction has been ongoing since late 2012. All of our projects focus on the public sector and civil construction. We are also in the process of building a new terminal, a control tower, aprons, and taxiways at Heydar Aliyev International Airport. We expect our work at the airport to be completed in 2013. This will boost capacity to 3 million passengers per year.

“Since 2007, five Azerbaijani construction companies have started working in the international arena.”

Who does AzVirt work with in terms of design?

We work on the design of roads without any support. For the airport, the concept design was carried out by ARUP and a UK company. We also subcontract work to smaller companies. In our foreign projects we find local designers to partner with.

What is your outlook for the Azerbaijani construction sector?

In the past decade, how would you quantify the changes in Azerbaijan’s investment landscape?

The changes are visible for everyone. The past 10 years have been marked as a period of immense change for Azerbaijan, mostly because of our great leader, President Ilham Aliyev. The government is actively working to increase the amount of non-oil FDI. This leads to more business opportunities in the construction field.

What are AzVirt’s medium-term plans?

We would like to become one of the largest and best Azerbaijani companies in the international arena. We are becoming more popular day by day due to our major projects here in Azerbaijan.