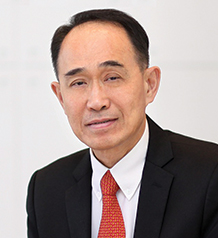 Kan Trakulhoon heads the Eastern Economic Corridor (EEC) project, being actively involved with government sectors in a drive to reform and restore Thailand’s economic stability. He also heads the Innovation and Productivity Committee and Legal Reform Committee. He was previously Director and Chairman of the Management Advisory Committee of Siam Cement Group (SCG) before retiring in January 2016. He was previously an external Director of Kubota Corporation and is now Global Advisor to Kubota Corporation and Member of the Advisory Board of Nomura Holdings. Trakulhoon holds a bachelor’s degree in electrical engineering from Chulalongkorn University and two master’s degrees from the Georgia Institute of Technology.

Share on:
TBY talks to Kan Trakulhoon, Head of Working Group of the Eastern Economic Corridor (EEC), on the background of the EEC project, the government's push to build up infrastructure in the country, and his projections for the coming year.

Can you tell us about the origins of the EEC project?

Our eastern seaboard has been a major discussion point for our country since the 1980s, when we discovered natural gas in the Gulf of Thailand. Over the years, Thailand has developed the eastern seaboard quite successfully with the petrochemical, automobile, and electronics industries. Our new government has developed a long-term vision to see how we can export this successful case and integrate new industries in the region because the opening of the AEC means that trade will expand across ASEAN. Thailand is a natural, geographic hub, especially on the mainland surrounding the CLMV countries. The EEC will act as an industrial belt, with access to Myanmar on the west and connecting Thailand to Phnom Penh and then on to the east side of Vietnam, which is a major part of our economic growth strategy. There are many industries already established and we want to introduce extensions, incentives, and value-add services of many types. The government has announced the new S curve of five industries that will look to the future development of our country, and will be central to our work on the EEC. These include robotics, medical, aviation, biofuels, and, crucially, digital.

How many of these plans relate to the government’s push to upgrade infrastructure and build connectivity within Thailand and the region?

The government’s infrastructure plans are absolutely crucial to this development, as the EEC’s main selling point is indeed its unrivaled access to major airports, sea ports, and trade routes. According to the government’s plan, we will now have a high-speed train from Bangkok to Rayong, a key location within the EEC, and currently one of Thailand’s main industrial hubs. In Rayong, there is a deep-sea port for heavy industry; however, with the EEC, we will develop another seaport from the navy in Sattahip. We also have U-Tapao airport, which can currently accommodate 800,000 passengers annually. This summer, however, a new terminal will open that will boost its capacity to 3 million and this is just the beginning. It has already assigned a professional consulting firm to design two runways, a new terminal, and maintenance, repair, and overhaul facilities for aircraft. Together with the Sattahip commercial port, this will cater to tourists as well as industry, as it is close to Pattaya and we are developing a ferry service that will allow people to travel across the Gulf of Thailand in one hour instead of five to six hours by road. These developments will enhance the EEC on top of the connectivity. In addition, there will be a motorway extension. We will have a web network within the EEC to increase logistics efficiency and also connect to the outside area. This is a major investment and a major driver behind the EEC project. Specifically, we estimate that the government and private sectors will pump roughly THB1.5 trillion over the next five years into the development.

This year is fast paced because the government wants the project to be initiated by 2017. We have to engage many ministries so currently we separate the jobs. The first is industry; we have to specify in detail the areas in the industrial zone, including urbanization. The Ministry of Industry and the Industrial Estate will look into the details together with city planners. The second job is on connectivity. In this case, we have the transportation planning agencies, which are under the Ministry of Transportation. We need the private sector in the area to join them. Right now, we are also engaging the tourism sector, as the EEC is focused not only on industry, but tourism as well. All in all, we expect the infrastructure and investments in the area to be completed within five years. However, the EEC is a step-by-step process and with all the sector-wide developments pushing ahead, we expect to see positive results as we go.