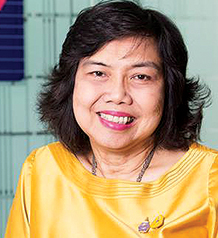 Wandee Khunchornyakong is CEO of SPCG Public Company Limited (SPCG) and Managing Director of Solar Roof Company Limited. Khunchomyakong has over 30 years of experience in the solar industry. In 2013, she was named Women Entrepreneur of the Year in the Asia Pacific Entrepreneurship Awards. UNFCCC has awarded her for leading women-powered solar energy transformation under the Momentum for Change, 2014. She holds doctoral degree in strategic leadership supremacy, a master’s in renewable energy, and BA in laws and marketing, and public administration.

Share on:
TBY talks to Wandee Khunchornyakong, CEO of SPCG, on the company's pioneering achievements in solar energy, growing interest in renewable energy in the country, and opportunities up for grabs with the AEC.

What have been some of the key recent achievements and landmarks of SPCG?

SPCG is a listed company on the Thai stock market in the energy sector. At the moment, we have 44 companies in the group, 36 of which are solar farms. We also cover the solar roof segment, which is considered a sunrise business so we expect to significantly expand this in Thailand in the coming years. We are the pioneer of the solar industry in this country and have to do the best we possibly can because we have banks, investors, and independent engineering companies monitoring our investments and construction. Since our first solar farm in Korat, we use Kyocera Corporation to supply all the solar module inverters from Germany, which is the best world-class design. We also partner with Kyocera Corporation to expand the solar roof business for residential and commercial customers. In the solar farm business, we expand our business into Japan and ASEAN countries, especially in Myanmar and the Philippines; they are our targets at the moment. We can make this business successful in Thailand, so then this might be the case in those countries as well; therefore, we want to expand the business in a way that we are the experts in solar energy.

What are some of the notable trends in Thailand’s renewable energy industry?

In 2010, no one was interested in investing in the solar farm business. We opened up the market and business opportunities to a point where solar farms now play a key role in the country’s energy mix. The government has set up a renewable energy development plan where it plans to have 6,000 MW of solar energy in this country within 20 years. There is a great opportunity if all the energy plans that the government wants to pursue within the next three or four years are realized. In terms of roofing, our society is at a stage where solar roofs will become increasingly popular and sustainable. I have been working in solar roofing for four years and this is the first time I see a real momentum of change. The Thai government is encouraged to install solar rooftops with various forms of benefits such as 100% on investments, where the user can draw 50% of the investment within three years’ time from corporate income tax. There are many other tax benefits that help customers get their return on investment in less than eight years; which is a great investment opportunity. The warranty of solar models is 25 years, which means the product is often passed on to other generations.

What will the AEC mean for your future expansion?

If we look at the demographics in the region, we can clearly see the opportunities. In Myanmar there are 60 million people and in Thailand 67 million people. Energy consumption is 34,000 MW in Thailand and only 2,500 MW in Myanmar. This is an opportunity where you have to look at the short, medium, and long term. Myanmar has many things to offer; it is an interesting country with resources, gas, gems, great people who can speak English, great land, and great weather. If the country is well developed, it can attract many tourists. Now that Myanmar has opened up, there are many things that need to be developed and many Thai companies that are helping. There is a short-term vision where we can put 100 MW of solar in six months. This should be the first phase. In the Philippines, there are 100 million people and the Philippines and Thailand used to be similar in terms of economic growth; however, the Philippines lost out heavily due to the financial crisis, and today they consume only 15,000 MW. The government announced the first lot of 500 MW has been completed, with the second phase expected to generate up to 1,000 MW.