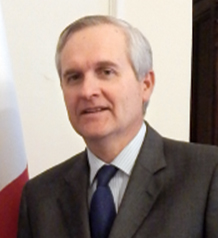 HE Álvaro Alemán Healy graduated in Law and Political Science from University Santa Maria la Antigua — Panama and from Duke University, Master in trade law, in 1986 he has worked as Sub General Director of the revenue department, for the Ministry of Treasury, as Advisor at the Ministry of External Relations, and as President of the Board of Loteria Nacional de Beneficencia. More recently, he was President of the Association of International Lawyers, Second Vice-President of the Partido Panameñista, and served as the Representative of the Commission for the Promotion of International and Financial Services at the Ministry of External Relations of Panama.

Share on:
TBY talks to HE Álvaro Alemán Healy, Minister of the Presidency, on expanding Panama's regional role, addressing the housing deficit, and opening the country to investment.

Panama City has recently hosted the VII Summit of the Americas: how would you assess this international event regarding the creation of a fruitful dialogue between the nations of the Americas?

We have now been able to position Panama as a mediator, as a country that tends to help and resolve disputes. Unfortunately, we had moved away from that position during the past few years of the previous government, and now we have regained this position whereby we maintain good relations both with the US and with the leading countries in the region; we have good relations with the countries that form the Alliance of the Pacific, we enjoy good relations with the Caribbean countries and we have regained a strong foreign policy position as a country that allows us to act as a problem solver in the hemisphere, and must recognize in this connection the leadership of President Varela and the Vice-President and Foreign Minister Isabel de Saint Malo de Alvarado. Establishing dialogue is fundamental, and a part of the government’s new vision.

This year marks the beginning of the government’s 2015-2019 strategic plan. What are the Ministry’s key medium-term priorities?

There are several core programs currently being run by the government. The current administration wants to guarantee the adequate supply of drinkable water in 100% of homes in the country, replacing the so-called latrines in all of houses. We have already initiated that program. We have also initiated a social housing program called “Roof of Hopes,” which is designed to solve the housing shortage. Private constructors tend to enter high-end, medium-end, and lower-middle developments, but are less involved in social housing. We are also involved in the renovation in the city of Colón, and will soon have a public bid to contract for the building of 5,000 public residential houses. Colón has been plagued by high unemployment and high crime rates, so we are making these investments to reduce both. We are sure we will achieve all our targets. We are also working hard to expand the Metro in Panama City, which will run from the central part of the city to the eastern part, near the airport. We are also already conducting studies for the building of line 3 of the metro, which will run from the city to the west side of the canal to urban areas there. This will also involve building a new bridge over the canal, and will widen the existing highway from Panama City to six-lanes. Those are the two primary megaprojects to be built in the near future. The expansion of the Canal will be hopefully be completed by mid-2016, and will obviously increase the opportunities of the logistics sector, and this entails a new port on the Pacific Coast.

What is the government doing to boost foreign direct investment in the country?

Foreign investment is welcome in any sector. The previous government passed a law in which the majority share in maritime services had to be owned by Panamanians. We repealed the law, and now foreign investors can engage in maritime services to make investments in the Panama Canal. That is the first step we took in that sector, and there are more than 100 multinationals active today in Panama with regional headquarters in the capital. We are promoting a new law to increase the number of international companies in Panama, and are in discussions with the Colón Free Zone to enhance their logistics capacity and offer a free zone to investors in Panama. It is important to note that we are actively combatting corruption and actively promoting the rule of law, because the first requirement a country has in order to attract foreign investment is the rule of law.