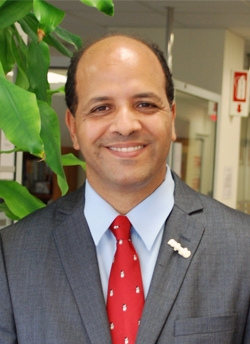 McDonald P. Benjamin currently serves as the Country Manager of the World Bank for the Dominican Republic. His experience with the World Bank covers the entire world, including Africa, Latin America, North Africa, East Asia, and South Asia. Before coming to the Dominican Republic, he served as Deputy Director for nine countries in Africa. From 2004-2008, he served as Sector Manager of the World Bank for social development in Latin America. Academically, Benjamin has an MA and PhD in Economics from Georgetown University, Washington DC, and a BA in Philosophy, Politics, and Economics (PPE) from Oxford University, UK.

Share on:
"The Dominican Republic is one of the two economies that introduced the most reforms in the Caribbean region in recent years."

Even though the Dominican Republic is one of the fastest growing economies in its region, with average 5.7% GDP growth over the past two decades, poverty remains a core issue. What initiatives have to be taken to improve the conditions of those in greatest need?

If there is one message regarding the Dominican Republic, it is that it has truly been a high flyer and an achiever in terms of economic growth for the region. From 1991 to 2013, it has been growing at 5.7% per year. In 2011, GDP per capita was 50% above that of 2000 whereas in Latin America, on average, GDP per capita rose 26% over the same period. The Dominican Republic, along with Panama and Peru, has been among the most rapidly growing economies in the region in recent years. The difference between the region and here is that the Dominican Republic’s high growth rate has not led to the same level of poverty reduction. Whereas in Latin America more than 70 million people have been lifted out of poverty since 2003, here in the Dominican Republic we have a poverty rate today exceeding that of 2000. Four out of 10 Dominicans still live in poverty, and almost one in 10 live in extreme poverty. Therefore, there is still clearly much work to do in spite of the high growth rates to generate more and better jobs for faster poverty reduction.

What is the World Bank’s role in supporting development in the country?

We have many roles as the World Bank, the first being a trusted advisor and a provider of knowledge services, that the government can turn to and count on, bringing insights from experiences in other countries that the government can then use to determine the program it wants to put in place. The second role that we play concerns financing development projects with a focus on better services and opportunities for the poor. Third, we provide support in such areas as bringing together or convening different actors, both nationally and internationally, to exchange ideas. Development is about new ways of thinking and it is about change; hence we often focus on supporting governments in achieving reform and thinking through how to go about that. The Bank, therefore, aims to bring a blend of knowledge, financing, and convening services, as a trusted advisor and support to the government. The World Bank Group’s key mission is the elimination of extreme poverty by 2030 on a global level, meaning no more than 3% of people around the world living in extreme poverty by 2030. This is consistent with the government’s own vision of just 2% or less of the Dominican population living in extreme poverty by 2030. Our second objective as the World Bank Group is to support shared prosperity. It isn’t enough for us for average GDP to rise; it is important that the income of the poorest 40% in the economy rises too. All our work is aligned to achieving these two objectives.

“The Dominican Republic is one of the two economies that introduced the most reforms in the Caribbean region in recent years.”

What is your assessment of the achievements of the Dominican government in that regard?

The vision for 2030 is a state vision, a vision of the people, and a vision that has been developed in consultation with thousands of Dominicans. It is a vision that has been enacted into law and goes beyond any given government, and hopefully will guide all administrations between now and 2030. I think there are certain areas where clear progress is being made; one important area is social protection. If we go back to 2003-2004, there was no social safety net in place at the time of the severe banking and macroeconomic crisis. Inflation rose, real wages did not keep up, unemployment rose, poverty climbed from 32% to almost 50%, and there was no safety net to protect the poor. Yet, today there is a social safety net in place that reaches over 800,000 Dominican households, and at a reasonably low cost as a share of GDP. Moreover, an increasing share of this program is being carefully targeted, and more importantly being conditional on actions that increase the human capital of the poor and strengthen their health and the education of their children, so that it isn’t just a handout but rather an investment in human capital.

In the newly released Doing Business Report, the Dominican Republic was in 84th place. Could you interpret the result of the rankings as well as the country’s performance over recent years?

The Dominican Republic is one of the two economies that introduced the most reforms in the Caribbean region in recent years. Only Jamaica has done more. The Dominican Republic advanced significantly during the 2005-2009 period and has again taken several steps recently to strengthen its position. The Dominican Republic ranks 84th in the world among 189 economies. It is encouraging that the Dominican Republic is focusing on strengthening the investment climate, and indeed it has a dynamic program underway to continue strengthening its reforms, particularly through the Ministry of Economy, Planning and Development, but also through several other entities within the state and the private sector. In fact, it took steps in the past year to reduce the number of forms needed for importing and exporting and that contributed to its strong position. There are other areas where it took steps this past year; for example, to protect personal information through Law 172-13, which was important because that affects credit information and, therefore, access to credit. In addition, the country has taken steps to strengthen the laws relating to transparency, governance, and the protection of minority shareholders. In the area of trading across borders, the Dominican Republic is now in 24th, and, therefore, among the top countries in the world. It is also among the top 50% in the world in 6 out of 10 indicators. The new Doing Business report 2015 introduced an important concept this year called ‘distance to the frontier.’ In ‘distance to the frontier’ you are looking at an absolute measure of how far you are from the best practice in the world on a given Doing Business indicator and on aggregate across all 10 indicators. The Dominican Republic is among the top one-third of countries in the world in 2014 in terms of its improvement on the aggregate Distance to the Frontier. At the same time, even in some of these areas in which the Dominican Republic ranks among the top 50%, such as protecting investors and getting access to credit, the distance to the frontier of best practice can still remain quite far; hence, further reforms could be undertaken to continue strengthening the investment climate. In terms of the reform agenda, there are other areas where the Dominican Republic does not yet rank as well as other economies; for example, on the costs related to insolvency or the time involved in getting access to electricity or the costs in terms of the capital requirements for starting a business, and the government is taking some important steps to strengthen these areas.

What sectors of the Dominican economy hold the most potential for further development?

From the perspective of poverty reduction, if we achieve growth but we are unable to improve the wellbeing of the poorest, we really have not helped as much as we might. One concern over the past decade was that in the rest of the region around 42% of people were upwardly mobile, rising from poor to vulnerable, from vulnerable to middle-income, or from middle-income to upper income, while in the Dominican Republic only 2% of the population moved up an income class. In fact one in five, 19%, moved down an economic class. So the real challenge is addressing the underlying cause of that. What we observe from Central Bank and other data is that there had been a large increase in productivity, which is 40% higher today than in 2000, but this has been accompanied by a decline in real wages. There are sectors that have done well in growth terms, such as telecommunications, which rose from 8% to 23% of the economy, and mining, which is been significant in terms of its contributions to growth and to improving the country’s export performance. Yet, neither of these sectors has generated significant employment, while many jobs have been lost since 2004 in the Special Economic Zones. We have found that at the Latin American level, 70% of poverty reduction in the region was due to more and better jobs. The question for the Dominican Republic is, therefore, how one can generate more and better jobs here. This is what it comes down to fundamentally. The country has a number of areas of potential beyond the above-mentioned sectors, including tourism and agriculture. For example, the Cibao Valley is highly fertile, and there is tremendous potential for adding value to that agricultural production and generating more jobs by linking it more to global markets. This involves strengthening phytosanitary standards, grading, cold chains, storage facilities and financing for agriculture to get more high quality Dominican products into a global value chain, as well as investing in agri-business to generate greater added value and employment here in the country.