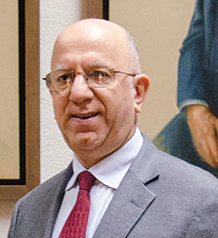 Jack Eskenazi’s father, Samuel Eskenazi, founded Group Tova and then he passed the legacy to his family, specializing in retail sales, originally operated through a single store. Grupo Tova has around 67 years of experience and has become the largest department store group in Panama with 18 branches.

Share on:
TBY talks to Jack Eskenazi, CEO of Grupo Tova, on the importance of the Colón Free Trade Zone, how the retail industry has developed, and the company's expansion strategy.

How has the company evolved over the years?

My father set up his first shop in 1948 and from that time he established a shopping culture based on a family-oriented atmosphere, providing excellent customer service, and considerate treatment to employees, who are called associates in our company. Over the years, his children became involved in the family business. We were national pioneers in establishing shopping malls after the period of dictatorship, which was around 1992. We have helped foreign brands invest in Panama, which has in turn made us highly competitive. We have become a very reputable partner, and currently also operate in the Colón Free Trade Zone, what enables us to be a regional power in the sector.

What is the importance of Colón Free Trade Zones for Panama to consolidate its regional leadership?

Panama has been rapidly developing in the last decade and Colón Free Trade Zone represents Panama’s retail base and it is the second most important FTZ in the world after Hong Kong. In terms of costs, Panama offers unbeatable conditions at the international level. On top of that, the great efforts from Copa Airlines to connect Panama to the world and the role of the Panama Canal, including its recent expansion, have consolidated this country as a regional and international hub.

How would you assess the state of development of Panama’s retail industry?

There are not many department stores, as we own 30% of the department stores available in the market. This is one of our main advantages; we operate in a limited sector with many small-scale players. Many years of experience, volume and competitive prices are our main advantages. We also know the market very well, having grown through many stages of national development. In general, Panama is a country of opportunities. Since 2006, it has grown at an annual average rate of 8.9%. Panama is a stable nation from a financial perspective and its growth, despite slightly slowing down, will continue in the next few years.
What regions of the country are you considering expansion into?
Until a few years ago, growth of the retail sector mainly happened in Panama City; however, we have luckily seen this expanding to other cities and regions, as we saw the construction of several shopping malls across the country. At the moment, we have 11 stores in Panama City and the rest are nationwide. Regarding a potential international expansion of our activities, we do not have such plans over the short to medium-term.

What is your target audience?

Our target goes from low-end to medium-high segments. High-end brands are not part of our business strategy. Our main strategy is to offer competitive prices, and we are always open to listen to potential suppliers. We have suppliers in Asia, Brazil, the US, Mexico, among others.

Over the past decade, our company has been growing at an annual average rate of 12%. We expect to close 2015 with on 5-7% growth due to the maturity of the country and sector. In terms of store number, we will have reached 18 by year-end. Each of these stores has an area of between 8,000sqm and 10,000sqm. In 2015, we have opened two new stores and one more is on the way, which will open by the end of the year. Our plans include increasing by two to three new stores every year. Therefore, our main target is to sustain the growth of our operations with new stores, while continuing to upgrade technological systems and innovation. We are also in a transition as we hand over management responsibilities to other players in the company, in order to further broaden our horizons in the next few years.