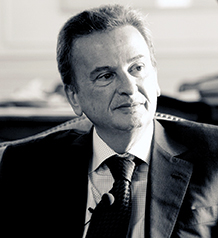 Dr. Riad T. Salameh has been the Governor of Banque du Liban, Lebanon’s Central Bank, since August 1, 1993. He was reappointed three times for a six-year term of office in 1999, 2005 and 2011. Salameh manages all aspects of the Central Bank and is assisted in his functions by four vice-governors and the Central Council. Salameh attended the Jesuits College of Collí¨ge Notre Dame de Jamhour and graduated with a BA in economics from the American University of Beirut.

Share on:
TBY talks to Dr. Riad T. Salameh, Governor of Banque du Liban, on the peg to the US dollar, efforts to boost entrepreneurship, and stimulating the real estate sector.

Confidence in the Lebanese economy and pound is relatively resilient despite a challenging external environment. What factors are behind this confidence?

Confidence in the Lebanese economy is threefold. First and foremost, exchange rate stability has been the anchor of financial stability in Lebanon since the late 1990s. This fact has been manifested in the systematic decrease of the dollarization rates of deposits and loans for the past two decades. Trust in the Lebanese pound is thus higher than ever and has in turn reinforced confidence in the economy as a whole. Second, the historical accumulation of a large stock of foreign currency assets has shielded the Lebanese economy against major political, security, and economic shocks. Banque du Liban’s foreign assets increased from around USD3 billion in 1993 to around USD37 billion today, and this is not even including gold reserves, which at July 2016 market prices were estimated to be more than USD12 billion. Finally, the large remittances from the Lebanese diaspora have been the backbone of the Lebanese economy for several years. They have helped in adjusting sizable current account deficits and have supported the multiplication of bank deposits to the point where they represent three times the size of the Lebanese economy. According to the World Bank, total remittances were estimated at around USD7.2 billion in 2015, making Lebanon the 16th largest recipient of remittances globally and the second largest among Arab countries.

Banque du Liban has been the main promoter of entrepreneurial activities in the knowledge-based economy. How would you assess the level of response to these initiatives and what are the prospects for this segment to become a flagship economic sector in the near future?

The idea to inject money into this sector came about when we recognized the significance that the knowledge economy had and the potential it could bring to develop the national economy. In order to capitalize the sector, we decided to increase banks’ investment possibilities in this sector from 3-4% coming out from their own capital. Three years on from the emission of Circular 331, we have seen tangible results through the growing number of startups attracted by and benefiting from this equity-financing scheme. To date, banks have committed more than USD300 million, with capital value of more than USD700 million. The ecosystem as a whole is systematically growing, increasing its ability to cater to the various types of sectors the knowledge economy is revolutionizing. Human capital has always been, and will remain, the main driver of the Lebanese economy, so our prospects for the future of the ecosystem are rather promising. Lebanon is effectively witnessing its highly qualified youth pushing the limits of innovation and creativity to the next level. The knowledge economy is thus undoubtedly one of the fundamental sources of inclusive growth for Lebanon’s medium to long-term outlook, in addition to the financial and the oil and gas sectors.

Until recently, the real estate sector was a rising star in the Lebanese economy with ambitious and extensive projects all across the territory. The economic complexities posed a threat to the industry and the sector lost its impetus, so in June 2016 we decided to issue Circular 427 with the aim of stimulating the real estate sector. This incentive scheme allows Lebanese banks and financial institutions to offer credit facilities of up to 60% to real estate companies, so they can acquire built properties with the purpose of selling them at a later stage, subject to specific conditions. This new scheme will not only benefit real estate developers, but the entire supply chain in this industry. By stimulating the sector we aim to increase our GDP.