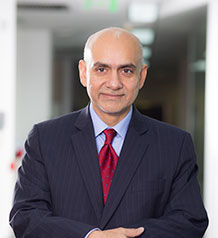 Mr. Moazzam A. Mekan covers IFC activity in Kazakhstan, the Kyrgyz Republic, Tajikistan, Turkmenistan, and Uzbekistan. He has over 20 years of experience in the field of infrastructure investments and public-private partnerships, having undertaken some of the most transformational projects in the transport, water, oil and gas, agriculture, and health and education sectors. He joined the World Bank Group in 1988 in the Latin America and the Caribbean department. IFC, a member of the World Bank Group, is the largest global development institution focused on the private sector in developing countries.

Share on:
"A successful privatization effort will require a transparent, technically sound and fair process for screening investors and evaluating bids."

What are IFC’s most recent projects that have the largest impact on the country’s long-term development?

IFC is the largest global development institution focused exclusively on the private sector. In this context, IFC in the last few years has invested over a billion dollars in Kazakhstan. If we speak about specific sectors, much of our work has been done in the financial sector. We are supporting the development of the sector by making investments and strengthening financial institutions to help them expand access to finance for small and medium enterprise (SMEs) and entrepreneurs. IFC supported Eastcomtrans with long-term financing to help expand its railcar fleet, broadening commercial logistics services and helping develop the country’s infrastructure for trade and industry. It also supported Jambyl Cement in the construction of a greenfield, state-of-the-art dry-process cement plant, as well as the Ust-Kamenogorsk Poultry plant to expand production and improve the bio-security of its operations and many other companies. For the country’s infrastructure, IFC advises the Ministry of Investment and Development to structure and implement an international tender for the Big Almaty Ring Motor Road (BAKAD). This situation, the first of its kind, is considered a market maker for future public-private projects (PPP) in the region. The project is part of the Western China-Western Europe International Corridor, where Kazakhstan is a key piece within the “Silk Road.” However, if you set aside these larger projects, there are many other small projects, for example microfinance initiatives that target the poorest in society. They may not be large loans, USD5-15 million, but they reach a large amount of households. For example, we provided funding through microfinancing institutions to a seamstress who makes Kazakh national dresses. Going forward, we see infrastructure, agribusiness, energy and resource efficiency, and financial and capital markets as key sectors for private investments in Kazakhstan. We also see great potential for broader use of PPPs and support the country’s privatization program.

Many countries try to diversify away from oil and gas. When prices go up again, how challenging is it to focus away from the energy sector?

At times these crisis periods are good because they serve as wake-up calls, this is the time to reform. In theory governments should implement reforms when the economy is doing well, because they have necessary funds for them though that never happens. An area that we support the government is increasing the private sector involvement in the economy. Kazakhstan is very much dominated by the public sector and the private sector’s role is limited to providing money to the government to support the budget. This needs a balance. We need the private sector for a number of reason. First of all for jobs creation as Kazakhstan is facing a growing population and needs more jobs. Around the world, SMEs create between 60-80% of jobs in any economy. In Kazakhstan, this is low, at about 30% or so. Moreover, SMEs in Kazakhstan grow more slowly than both larger firms in Kazakhstan and SMEs in comparable countries. While Kazakhstan is believed to have a large number of “latent entrepreneurs,” the share of startup firms remains relatively low, and few firms transition from small to medium size, or from medium to large. Barriers such as geography, local market size, informality, corruption, high administrative costs, inadequate access to finance, and a lack of professional and managerial skills all inhibit the formation and growth of SMEs. The dominant role of SOEs in a number of markets is also a major barrier to the entry and growth of smaller firms and to the overall development of the private sector. The public sector cannot keep employing people and filling ministries and state enterprises with more people. The government needs to increase the role of the private sector and focus on SMEs. The privatization program is clearly designed for this and the question is how it is going to be done and how the regulation will work. For the success of the privatization effort, attracting the right investors will be critical. The uncertain global economic environment in general, and the collapse of global oil prices in particular, have reduced the attractiveness of many middle-income countries to international investors, and Kazakhstan is no exception. The challenges of privatization may be exacerbated by the specific terms of the privatization process. For instance, a number of important SOEs are slated for partial privatization, with the government retailing an ownership share of 75% or more, which may diminish their appeal to investors. Moreover, the initial public offering approach has not proven successful in Kazakhstan in the past. In addition, a successful privatization effort will require a transparent, technically sound and fair process for screening investors and evaluating bids. Since employment is and should be a goal for any government, successful privatizations require that the social contract between the government and society is maintained. If there are concerns about people losing jobs as a result of the privatization program, there is a need to put in place program which allow redundant employees to gain new skills through retraining programs, outsourcing opportunities, and provision of SME services. A privatization process might reduce employment rates in the beginning, but employment actually goes up later because as companies expand their operations they require more people.

Many sectors in Kazakhstan, for example agriculture, have low penetration rates. What is your view on its investment potential?

Agriculture has huge potential indeed. Kazakhstan has the fifth-largest amount of arable land in the world and, in terms of availability of new land, it probably stands at number one. It is also located in a region with about 3 billion people within few hours of flying distances China, India, and Iran. This huge population is become affluent due to sustained high economic growth rates experienced in their countries over many years and this population has changing preferences as the incomes have arisen. The most notable change has been a gradual shift away from vegetable-based diets toward protein-rich diet (meat). Also there is a modern trend toward organic production. It takes about 7 kg of feed to produce 1 kg of beef. The feed which is mostly grain based requires good land. And here Kazakhstan has the advantage. Kazakhstan has no limitation on land. It can even focus on organic production that many countries do not have the luxury to produce because it requires a certain amount of hectares per animal. Therefore, Kazakhstan has tremendous potential in agribusiness. However, there are hardly any international investors there. There has been a focus on grain in the past, dominated by Kazakh companies financed mainly by KazAgro or else privately. Their finances are not in a shape to receive more money at the moment. There is clearly an issue of how these companies have been financed in the past and whether they can get new credit. Other areas that investors should focus on are fruits and vegetables and livestock. We need to get the right investors into Kazakhstan’s agribusiness with the right technology, as the agriculture business has become technical.

The National Bank currently is currently focused on bringing inflation down from double-digit figures to a 6-7% target. How do you welcome the bank’s current monetary policy of keeping interest rates unchanged?

The base bank rate today is between 12-14%. This rates seems high but in fact it gives a negative real yield given today’s inflation level. Nevertheless it’s considered high as it hinders creation of new credit. By the time lenders add their margins to the base rate, the available credit rates turn into 16-18% range. The demand for credit is thus low and businesses are postponing borrowing decisions. The National Bank has made a shift in its monetary policy toward inflation-targeting which leads to the tenge rate being adjusted by the market. The idea is to restore the credibility of the monetary policy after large devaluations of the currency over the past year. However, Kazakhstan faces a huge challenge in this respect. Extensive dollarization in the economy, with more than 65% of bank deposits in foreign currency, limits the effectiveness of monetary policy. Clearly this issue needs to be tackled. To stabilize the banking system, the government plans as medium term measures to further develop non-cash payments, reduce turnover in lightly-regulated shadow banks, and ban foreign currency pricing. To achieve stability in the long run, the government will try to accelerate economic diversification and increase the local content of goods and services as far as possible under World Trade Organization (WTO) regulations.

What are your predictions about the opportunities and challenges Kazakhstan will face during its recovery in the next few years?

There is some good news and some new challenges. The good news is that oil prices have stabilized, and that is good for Kazakhstan. In the immediate future, this will help the country build its reserves and take the pressure off the government budget, allowing it to spend more. Increased spending would mean more economic activity, and therefore higher growth rates. This is an opportunity for the country to reform and the challenge would be to keep the ship steady and maintain the policy for change. As oil prices go back up, there will be a temptation not to undertake difficult economic reforms and make it more efficient and resilient. The government should pursue the economic diversification it has planned. Central to sustained improvements in productivity are the strengthening of the business climate, greater room for private sector expansion in an environment of neutral incentives, and progress on the governance agenda. A well-functioning financial sector and improved access to finance remains an important element of the growth and diversification agenda. An important challenge is further development of the credit infrastructure—pledge and real estate registries, microfinance, factoring, leasing and venture capital—and the deepening of local currency bond markets so that multiple sources of financing for the private sector at competitive prices can be developed. Trade integration policies will affect prospects. The development of infrastructure to position the country as a regional transit hub, the development of Caspian Sea ports and railroads, and the development of aviation will further assist productivity growth outside oil.