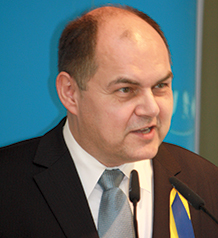 The Hon. Christian Schmidt was born August 26, 1957 in Obernzenn. He was Parliamentary State Secretary in the German Federal Ministry of Defense from 2005 to 2013 and Parliamentary State Secretary in the German Federal Ministry of Economic Cooperation and Development from December 2013 until February 2014. Christian Schmidt is the President of the German Atlantic Society as well as a member of the Society for Christian-Jewish Cooperation. He sits on the board of the Coordination Council for German-Czech Dialogue. He is a member of the Supervisory Board of the Centre for International Peace Operations (ZIF), and sits on the councils of the Foundation for the Examination of the Dictatorship in East Germany and the German Foundation for Peace Research.

Share on:
TBY talks to The Hon. Christian Schmidt, Minister of Food and Agriculture, Federal Republic of Germany, on investing in Zambia, the challenges faced in the country, and climate change.

What advice would you give to German agriculture investors wanting to set up in Zambia?

Zambia has vast land and a population that is eager to learn and to be productive. The country has huge potential. This also has to be developed. Investing in Zambia strikes me as pioneering work and provides the chance to grow with the future developments in this country. Increases in yields will not only enhance Zambia’s condition, but what’s more, neighbouring countries will benefit from the development. The investor should thus not only see Zambia as a market, but also recognize opportunities in neighboring countries. The Zambian-German Agricultural Knowledge and Training Centre will increase the availability of trained staff to use modern technology and apply sustainable production methods in Zambian agriculture to make future investments in the country viable.

What are some of the principal challenges faced by Zambian farmers?

Given the extensive resources of land, labor, and water in Zambia, the potential to expand the country’s agricultural production. Furthermore the government has embarked on a land development program, which involves opening up new farming blocks for commercial development and the expansion of the agriculture sector. Farmers need to come together and find solutions suitable for their situation. Education is the secret to resilience and adaptation to future challenges. Farmers can only develop and adapt to the changing climate and market requirements when they have received the appropriate education. Schools, universities, and institutions should provide young people with an excellent education to succeed. Germany contributes to these efforts through the Zambian-German Agricultural Knowledge and Training Centre.

Climate change is changing the way agriculture is being practiced the world over. What are some of the things that Germany is doing to deal with climate change?

Germany’s farming sector success is based mainly on animal husbandry. To a large extent maize or wheat is grown in Germany not only to feed its population, but also as feed for the country’s livestock. These and other crops also play an important role in the generation of renewable energy. Other suitable measures of environmental protection and sustainable agricultural production is adapting no-till farming practices, not allowing the burning of straw, and minimizing air pollution from agricultural machinery. German research institutions are working on adoption strategies for agriculture to cope with the challenge of climate change. It seems that some countries will be more affected by climate change than others. This is why AKTC also has the word “knowledge” in its name. Over the coming year the center will work to adapt production systems that can be more flexible in their response to these challenges. We hope that AKTC can contribute somewhat to the question to climate change.

What is your government’s position on GMOs, and do you think they are a solution to Zambia’s food security challenges?

Genetically modified food products are labeled as such in the EU and they are rarely sold in Germany, because of consumer reservations. Feed, especially soy, which is labeled as “genetically modified,” is widespread and used by farmers in many instances. There is a German initiative at EU level to introduce obligatory labeling for food produced with GM feed. Products that are made from GM cotton such as clothing, hygiene products, and bandages are widespread as well and accepted by the vast majority of consumers. There is large opposition by NGOs against the cultivation of GM crops. A draft law has been presented which would allow to restrict or ban at the national level the cultivation of GM crops authorized at the EU-level for “compelling reasons” other than those relating to risks to health or environment. The Federal Ministry of Food and Agriculture has introduced this draft law, which is currently under discussion within the federal government. GM crops can, in certain instances, contribute to food security, and create crops tolerant against heat or salty soils. Whether these crops are suitable for Zambia depends upon the regional and local circumstances where such GM crops could be cultivated, and this must be decided by Zambia.