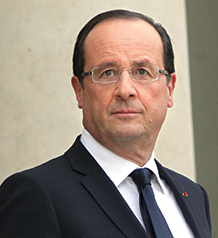 François Hollande joined the Socialist Party in 1979, becoming First Secretary from 1997 to 2008. Other prominent positions have included Mayor of Tulle from 2001 to 2008, deputy for Corrí¨ze from 1988 to 1993 and from 1997 to 2012, and Chairman of the General Council of Corrí¨ze from 2008 to 2012. Hollande graduated from HEC Paris and the Institute of Political Studies in Paris, and is an alumnus of the Ecole Nationale d’Administration (ENA). As an academic Hollande held a tenure as professor of economics at the Institut d’Etudes Politiques de Paris from 1988 to 1991. In May 2012, François Hollande became the seventh president of the Fifth Republic.

Turkey is a country that has a considerable political role and potential, a country that has demonstrated impressive economic development. Our political relationship is now established, a strategic cooperation framework has been signed, and our two foreign ministers will regularly meet with each other. As we have important cooperation occurring, this agreement will also be completed in terms of defense. We are two members of NATO, two allies. But I can say that Turkey is a big country economically, with impressive growth over these last years. We note Turkey’s rise in purchasing power, particularly low public debt, and its remarkable industrial capacity. France is playing its part, when I look at the numbers our presence is important, with many French companies present here, but we are not at the level desired by Turkey and France. And what area should correspond to the dynamism of our economies? We should work together in energy, and specifically civil nuclear energy. Strategic contracts have been established, including with Japan and France, as this area of industrial agreement has to be developed. However, there is not only nuclear energy, there is also renewable energy. Here, many companies have been engaged in this process. There is the transport sector, both for high-speed lines and for aeronautics, and even for ground transportation. In terms of food, we have high capacity and great opportunities. But it is not simply related to economic contracts, trade is required; it is essential since Turkey is an emerging country. It is a country that has now reached a level of development that makes it the 17th largest economy in the world, with the goal of becoming one of the top 10 countries economically. Finally, France and Turkey know the value of their language, culture, science, and progress.

We are indeed proud to have welcomed Turkish authors and artists of high reputation to France. We also have a great admiration for the contemporary art that comes from your country, including cinema and theater. You have reminded us of the great French writers who have emerged during different centuries, Turkey. That is what we still encourage, academic and scientific exchange. From this original alliance has been born multiple exchanges between our two countries, which have never been denied across languages, cultures, and societies. Everything bears witness to the strength of the relationship between Turkey and France. I want to commend the contribution of many Turks who, over the years, came to live in France, started families, and sometimes took French nationality. Today, there are over 600,000 participating in the vitality of our Republic.
I also want to mention the accession negotiations of Turkey to the EU. I know that the European perspective is here in Turkey. Accession negotiations have been occurring for many years, since 2004, and France believes that this process should continue in good faith, in accordance with the agreed conditions and procedures. We will see the truth will come out of these negotiations if they are conducted in this spirit. Europe and Turkey have already signed, and I thank the Turkish authorities for this, an agreement on immigration issues, which are always sensitive. Turkey has involved itself in what is called a readmission agreement that allows for the control of illegal immigration to EU countries, since we know that some illegal immigration passes through Turkey, without complying with Turkish immigration. So it was necessary to have this monitoring process and again Turkey took an important role.

Finally, we have the question of the Customs Union, a subject that is important for Turkey. The Customs Union between Turkey and Europe dates from 1996 and has a role in trade development. And we must do everything to ensure that the Customs Union is as clear as possible. Turkey and France will host two major events next year; the G20 Summit here in Turkey and the Conference on Climate Change in Paris. Our two countries decided to act together in a coordinated way to exercise our responsibilities successfully for these two appointments. It is our intention to not avoid anything, to conceal nothing in what can sometimes be sensitive issues, including historical memories. But at the same time we want to engage in a long-term process of trust, which politically needs to be heard, especially on the most sensitive issues; and to have more mutual economical results because it is in our interests to look into this merger, which as I said is historic but mostly tied to the future of our continent, and region.