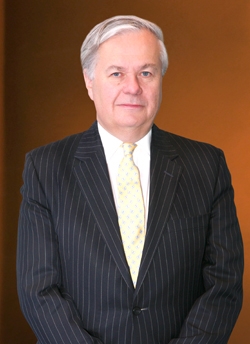 Michael H. Tomalin is a senior international wholesale and private banker with hands on executive experience in the UK, Japan, Middle East, Australia, the Caribbean, and the Far East. Trained as an Investment Manager at N.M. Rothschild in London, he broadened into General Management at Barclays, culminating in his appointment as Chief Executive of Barclays Global Private Banking in 1992. He Joined National Bank of Abu Dhabi (NBAD) as its Group Chief Executive in 1999. In 1991, he received the honor of Officer of the Order of the British Empire (OBE). He also holds an honors degree in Economics.

Share on:
"Considering top-line revenue, the banking system in Abu Dhabi is growing at about 7%-10% each year."

In 2012, all of the UAE’s banks performed well despite the global uncertainty. What are some of the key reasons for this performance?

The UAE’s economy is continuing to grow and it is a creditor nation. We are exporting more than we are importing. There is capital formation in the country, which is going toward infrastructure development and investment abroad, so the economic backdrop for UAE banks is relatively benign. Having said that, there have been very substantial provisions, particularly for the real estate sector. Those provisions were made during the 2008-2010 period. As we come out of that, the growth of provisions will begin to slow down. The key number to look at in the banking industry is top-line (operating) revenue. Considering top-line revenue, the banking system as a whole is growing at about 7%-10% each year. The bottom line is masked by large provisions, where there are large differences between the banks in terms of the timing, amount, and treatment of those provisions. However, if you concentrate on the top line, you will see that the good banks are growing at around 10%. That is very healthy in the context of the world, where banks earnings are relatively subdued. The challenge these days for banks is to generate top line revenue growth.

How would you evaluate the competitiveness of this market?

There are more than 50 banks operating in the UAE. It is a very competitive market, and more so than the other Gulf markets. Foreign banks have around one-quarter of the business. If you compare that with other Gulf markets, you will not find those sorts of percentages prevailing. In Saudi Arabia, for example, foreign banks are limited to 40% equity ownership. In the UAE, where the banks are very competitive, consumers benefit from choice and price. I would describe this as a well-developed, competitive market for financial services. Additionally, the Dubai International Financial Centre (DIFC) is here. Although the DIFC banks technically do not provide services to UAE resident companies, they do provide services to large institutions and corporates, though not in UAE dirhams. This spillover affects the competitive situation in the UAE.

“Considering top-line revenue, the banking system in Abu Dhabi is growing at about 7%-10% each year.”

Do you think the market is becoming over saturated?

There is always room for more. I am a great believer in open markets, and if people can find a way to get in and make money, they are welcome. In order to compete, you just need to be more efficient and smarter than the bank next door. If another bank can come in and take a share from the existing ones, that is good for the customer. That is why market economies work. The UAE is well positioned as a base camp for doing business in the region. Many people are coming to the UAE, not to do business in the UAE necessarily, but increasingly to do business from the UAE with the region around it, which can be described as very large. From the UAE, companies can enter countries such as Turkey, Egypt, India, as well as the east coast of Africa and most of Central Asia, making this a good location to set up a regional office. The banking market as defined is very large. As a result, it is important to look at the UAE in two ways. There is the domestic market, which is the biggest banking market in the Middle East, and the markets that banks based in the UAE serve, whether local or foreign. Regarding the latter, many new banks have entered the market and I think many more new banks will come, especially now that Abu Dhabi is setting up its own Global Marketplace. In regard to the domestic market, there are limitations set by the Central Bank as to which banks can enter the market, and much of it is based on reciprocity.

The National Bank of Abu Dhabi (NBAD) was once again named the region’s safest bank in 2012. What is NBAD doing to safeguard against future external shocks?

We have not, for example, used our balance sheet to lend money or invest in things that we do not understand. We lend money to customers as a way of winning business from them. As a banker, I am not a great believer in lending as an end in itself. I believe that a bank lends in order to manage a company’s pension fund, to do the next bond deal, to win the next advisory mandate, to advise the IPO, to get the opportunity to hedge customer interest, foreign exchange, or commodity price risks. A banker should use lending as a means to earn ancillary income. Therefore, we did not put money into structures that looked good but there was no relationship traction. When investment banks were coming here to sell special-purpose vehicles (SPVs) that seemed to promise fantastic returns with AAA ratings, we did not buy any of them—not because we were smarter than any of the other banks. We didn’t do it because we could not see the relationship traction.

We have also developed a substantial asset management business. Asset management is a very good business to be in because you do not employ capital, but you earn fees from it. We have built a wealth and private banking business in Geneva and the UAE, managing private wealth and earning fees from the management of that wealth. We have built an investment advisory practice. We have advised on one or two major corporate major deals here in the UAE. Again, this is a fee-generative business as opposed to a balance sheet-based business. Our strategy is all about using our balance sheet to earn fees and build competence inside the organization. At the same time, we have been very conscious of liquidity. Banks need to be liquid. In short, by being diversified internationally and by service, earning fees, being liquid, and staying careful about how we use our balance sheet, we work hard to protect our bank from external shocks. We also maintain a capital adequacy ratio (CAR) well ahead of what the local regulator demands. That is another reason why NBAD continues to be rated amongst the 50 safest banks in the world.

Do you believe the appetite for high-risk investments in the Middle East has returned to the UAE?

I do not see any evidence of that returning to the UAE. We did have an asset bubble in real estate and in the equity market in the 2000s. There is a bit of a new bubble in the real estate market in Dubai, but I don’t sense that across the country. Local equity markets have performed well over the past three to six months; however, they have not done what they did before, and values against earnings are generally much more measured. The banks are probably more prudent this time around, because they got burned as well. The regulator is obviously much more sensitive to this and that is why we are seeing preemptive action, such as mortgage caps. The regulator will want to spike any speculative bubble early on to avoid any systemic problems in the banking system.

With sukuk sales expected to surpass their 2012 record in 2013, what opportunities and risks are there for growth in this area?