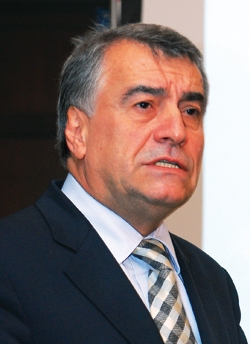 Minister of Industry and Energy, the Republic of Azerbaijan

After graduating from university, Natiq Aliyev worked at the Azerbaijan Offshore Petroleum Trust and the geological exploration office of the Kaspmorneft production association. From 1993 to 2005 he was President and Chairman of the Board of Directors at the State Oil Company of Azerbaijan Republic (SOCAR), and on December 9, 2005 he was appointed Minister of Industry and Energy.

Share on:
What have been some of the achievements of the Ministry of Industry and Energy in 2012? It was a successful year because we increased our GDP by more than 9% […]

What have been some of the achievements of the Ministry of Industry and Energy in 2012?

It was a successful year because we increased our GDP by more than 9% in the industrial sector. We have implemented several projects in metallurgy and construction. More than 100 new plants were constructed in Azerbaijan in 2012. At the moment, the GDP share of industry is about 54%. Industry is an important part of our economy. We tried to develop industry because traditionally the Azerbaijani economy was based on the oil and gas sector. Energy is the main sphere of Azerbaijan’s economy, and we are very happy to develop the oil and gas industry. Since 1994, oil production volumes have increased by more than five times and gas volumes have increased by more than four times. Azerbaijan is now energy self-sufficient in terms of oil and gas. The second factor in our policy is to become an exporting country, which we believe we have achieved. Also, we want to increase our reserves. We have increased our reserves not just in oil, but also in gas. We recently discovered new fields, and we are very encouraged that companies are discovering new ones. We now have gas reserves of over 2 trillion cubic meters. What we are working on now is to diversify our roots by working with the European Commission. In regards to this, we created a team of which I am one of the co-chairmen. What we are doing is working on developing a new Southern Gas Corridor. It means that all of the gas from the Caspian region, especially Azerbaijan and Turkmenistan, will go to Europe via the Caspian Sea, Azerbaijan, Georgia, and Turkey. A pipeline already exists through Azerbaijan, Georgia, and Turkey, and now we are expanding this corridor. We made the decision to extend the capacity up to 56 billion cubic meters (bcm), which will be implemented in the near future. We are beginning a very important era of communications between Azerbaijan and Turkey to transport gas across the borders of our countries to Europe. In 2012, Azerbaijan made tremendous progress in this direction. The Trans-Anatolian gas pipeline (TANAP) will be an extraordinary project for Azerbaijan and Turkey because it ties the two countries to Europe. This link will be very important for all the economies in the Caspian Sea region across to the Mediterranean. In the electricity sector, we had a lot of success in 2012 by implementing many new projects to produce electricity. We increased the capacity of our electrical stations, and now we have no problem regarding supply for our people and cities. Now, we are working to take our first steps in renewables. In 2012, we implemented a pilot project in the renewable sector, and constructed a photovoltaic plant in Sumgait. We have a new strategy and program for developing renewables, and we expect 2013 to be successful year in this regard.

How would you characterize the non-oil potential of Azerbaijan’s industries?

This is a very important but complicated issue. Traditionally, in the Soviet period Azerbaijan was an oil and gas country. In the first years of our independence, our economy was based on the oil and gas industry. To develop the non-oil sector, we need a lot of investment, capital, and finance. At the beginning, Azerbaijan had no money. We had a lot of potential, but no base. The financial institutions could not be assured if they lent money to Azerbaijan, as it was a risky country. The only way to go forward was to develop our oil and gas industry, which we did, and now we have developed our oil fund to more than $45 billion. This means that we can implement projects to develop the non-oil sector. We started with infrastructure, because it is clear that without infrastructure you cannot develop any economy. This also includes the market’s infrastructure. Each region of Azerbaijan has its own ideas on how to develop certain industries, but the government is working on several programs, which are to be initiated and approved by the President. Step-by-step, we have to develop the non-oil sector in Azerbaijan.

How do you intend to capitalize on the companies in the offshore fields?

For the Ministry, the main goal is to create a base to increase our reserves. One way is with SOCAR, which is working with the government, and the second way is with foreign investments. Some years ago, we had no money for exploration because it was very expensive and capital intensive. The cost of drilling is over $100 million. Now, we have the opportunity and this is why SOCAR expanded its drilling operations in the Caspian Sea. We discovered new gas fields and it has been a huge success. Foreign companies have a duty to invest money in exploration work. They need to drill no less than two drills when exploring. Another success story is that Total drilled a well and discovered new gas fields as well. That is why in our Ministry, foreign companies have helped and supported us, and we created laws regarding equipment delivery and customs payments. We created a fair regime in which foreign companies can work. It is very important for us to increase the exploration of wells, not just for SOCAR, but also for all our partners. We work on the basis of a production-sharing agreement (PSA).

“We increased the capacity of our electrical stations, and now we have no problem regarding supply for our people and cities.”

How do you evaluate Azerbaijan’s potential to become a regional energy hub?

We achieved this goal when we increased Azerbaijan’s gas and oil reserves. Our main goal is to produce this oil and gas, and the second is to deliver it to foreign markets. We fulfilled our duties in Azerbaijan and we produced 45 million tons of oil and 27 bcm of gas in 2012. This means that Azerbaijan can meet its own needs. Azerbaijan consumes about 12 bcm of gas annually; the rest is exported. Turkmenistan announced that it is ready to transport gas across the Caspian to Europe, but we don’t know when that will be. We are in negotiations about the construction of a cross-Caspian pipeline. We are talking about the obstacles, circumstances, and volumes, as there are some issues that have not yet been solved. If other countries would like to cross Azerbaijan with their oil, gas, or energy resources, we will do our best to deliver it across our territories.

What is the Ministry doing to increase the use of sustainable energy?

We have never depended on renewables before. Only 14% was produced by hydroelectric stations and 1% was renewables. That is why we never used wind or solar energy. Renewables is a very highly developed industry, and some countries have more than a 20% share in sustainable energy. That is why we are taking the first steps toward renewables, and the President established an agency within the Ministry. This agency will start to work on the regulations for renewable energy. We are trying to learn and study from other countries to see what is the most effective method for Azerbaijan. We created a map of renewables and a database, and we are implementing small pilot projects. In 2011, to increase the volume of work the President issued a decree and created an independent renewables company. This company will implement practical projects to create power stations using renewable sources, such as hydro, wind, or solar. We created a program up until 2020, and we want to achieve no less than a 12% share in renewable energy. We have the right climates here and a lot of windy days, especially in certain regions. We also have a lot of sunny days, so we can use solar energy very effectively. Azerbaijan has thermal waters in the north. We have to develop these renewable sources. It is the first step, but a very important one.