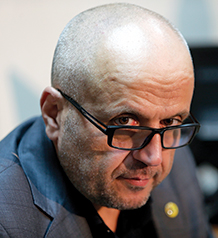 Read All About It

Ibrahim Al Amine has more than 25 years of experience, starting his business life as a political journalist with Al-Nidaa and later moving to As-Safir to become a political editorialist. He is currently the Editor-in-Chief for Al-Akhbar newspaper and the founder and Chairman of Akhbar Beirut SAL. He is a well-known columnist and TV commentator.

Share on:
TBY talks to Ibrahim Al Amine, Editor-in-Chief of Al-Akhbar, on the publication's role in the national media landscape, the institution's independent approach, and adapting to changes in delivery formats.

2016 marks the 10th anniversary of Al-Akhbar. How has your work transformed the media landscape in Lebanon?

We made the decision from day one that Al-Akhbar would be a non-traditional newspaper. This has been reflected in our attitude and opinion about all the events in Lebanon and around the world. The late Jospeh Smaha, our founding Editor-in-Chief, declared from the beginning that we oppose the imperialist forces that are trying to spread their hegemony all over the world. This non-traditionalist decision extended itself to the layout of the newspaper, where we used a new format that had not been seen in the market before: a front page with large photographs and a minimal word count on a smaller paper size compared to other political newspapers in the region. Our website also reflects the newspaper’s approach as it is easy to navigate, there are dominant white spaces, and the simplicity in the color is evident. Such design and attitude has inspired other newspapers and media outlets to adopt new, non-traditional designs as well.

Al-Akhbar has a highly independent approach toward news in the region. How does this characteristic contribute to attracting wider and more diverse audiences?

By being highly transparent and independent, people trust us. Readers are intelligent and are able to differentiate between independent, anti-corruption news sources and monotonic ones. The fact that we have also adopted a progressive approach toward social issues, human rights, and values add to the credibility that we enjoy in the media industry. We reflect Al-Akhbar’s core values and those of the people of these countries.
How is Al-Akhbar coping with the global trend for the digitalization of media?
We constantly review and analyze new trends. For example, web surfers are referred more now by social media posts rather than visiting the webpage URL, so we tackle this market with focal strategies to have presence in social media and develop long-term plans for these platforms. Today we have about 1.8 million Facebook followers. We are currently updating our website through an aggressive media approach that was released in August, as well as mobile apps to be released before the end of the year. We are also working on a monetizing strategy for our website.

Al-Akhbar is one of the most popular newspapers in the Arab world. What steps have you taken to grow in markets different from Lebanon?

More than 60% of our website visits are from outside Lebanon. This exhibits the valuable trust of our readers. Unfortunately, the political realities in the Arab world do not tolerate a highly independent newspaper such as ours and thus we do not publish locally in other countries. However, we appeal to our readers in the Arab world through our truly wide network of local writers and freelancers who are embedded in their local communities and reflect their attitudes, needs and tastes in their articles.

Do you have any new features to implement in the upcoming years?

Part of our 10th anniversary is to include supplements in our printed edition and progressively release these new features throughout 2016. We are widening our commercial supplements scope as well, an area that we will further explore in the years ahead. Digitally, we will have a major overhaul of the website with new services and a completely new technology platform. We will also release our own mobile apps before the end of the year. On a more colorful note, we just published a successful supplement to Game of Thrones, and due to its great success, we will continue to offer exclusive supplements in coming issues.