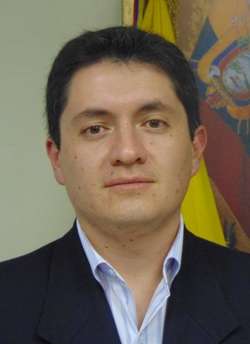 President of the Board, Banco Central del Ecuador (BCE)

Diego Martinez V. graduated from the Catholic University of Ecuador and has a Master’s in Development Economics from the Institute of Social Studies (ISS) in the Netherlands. He has held several important public positions, and has been a member of the Boards of Petroecuador, Petroamazonas, the Electricity Corporation of Ecuador, and the Pacific Refinery. He is currently the President of the Board of Banco Central del Ecuador (BCE).

Share on:
"The goal of our government is to promote a change in how the country produces goods and services."

Ecuador’s growth in recent years has mainly been funded by public investment. What is the government’s strategy to ensure that this translates into sustainable development?

The goal of our government is to promote a change in how the country produces goods and services. We want to change the country from being a mainly primary goods producer to one that has a significant industrial and services sector. In 2013, Ecuador’s economy grew by 4.5%, and over the past four years has recorded average growth rates of 5.2%. This is quite stable, not just for Latin America, but globally. But more importantly, the manufacturing sector and the non-oil economy grew considerably. The non-oil sector has grown by 5.8% since the world economic crisis of 2010. Our aim is to transform Ecuador into a non-oil and knowledge-based economy, although it remains in need of generating foreign exchange. These foreign exchange revenues are being used to promote a different growth and development pattern. Public investment has to underpin a basic infrastructure that allows the non-oil industries to shift their costs to become more profitable. This has been happening heavily over the past five or six years. This is because, from a cost structure perspective, it would not be possible to bring about the changes needed solely through private initiatives. The government must provide the infrastructure, roads, electricity, education, healthcare, and higher education. These are all crucial to changing the relative costs of industry over time. Today, all non-oil sectors are growing faster than in the past, in a highly stable economy. Ecuador has solid growth, low inflation and unemployment, stable interest rates, and increasing human talent, all conducive to private sector investment. We do have a current account deficit, since we are investing and importing raw materials and capital goods to support production and these investments, but the current account deficit is still only 1.3% of GDP, which is quite manageable. Our financial system is also stable. We have the highest liquidity rates in our history since becoming a dollarized economy, having increased from 29% in 2009 to 37% in 2013.

Considering what we have seen over the past few years among southern EU countries, do you have concerns that you are using a currency over which you have no control, while at the same time engaging in high levels of public investment?

This concern explains why we place great importance on stability and responsibility, and accounting for every dollar. As we lack a national currency, each US dollar that goes out means less money to fund Ecuadorean growth, while each US dollar that comes into the country promotes growth, spurring greater investment opportunities and aiding the financial system in general. Three years ago new policies allowed us to control the volume of money in the economy, helping to attract money to Ecuador. In the past it was common for bankers and citizens to save money abroad. Our new policies make it more attractive to keep their money here. This has increased liquidity in the economy, which encourages further investment. Credit policies are also important, be it via the private or public banking sector. Total credit increased from 20.3% of GDP to 28%. In nominal amounts, credit growth has been at 109% over the past five years, while private credit rates have grown by 92%, and the public banking figures are at 356%. We have followed a deliberate policy of increasing credit to keep the country going and the economy running smoothly. In 2013, FDI accounted for 0.8% of GDP, or $702 million, which many consider as low, although FDI in Ecuador is a net provider of foreign exchange, and those rates are still the highest Ecuador has seen in the past five years.

“The goal of our government is to promote a change in how the country produces goods and services.”

The BCE is a signatory of the Maya Declaration for Financial Inclusion. How are you incorporating efforts to promote financial inclusion in BCE policies?

We are changing the structure of our means of payment system. In Ecuador, checks used to be important, but we are now shifting to electronic payment systems. That is crucially important because it enables you to increase the amount of money in circulation by promoting faster transactions in the economy. We have also included the cooperative sector in the traditional means of payment system, and their share in the system has increased by 18%, which is an important development.

What are your key priorities for the BCE over the coming years?

Providing enough liquidity for the economy and making sure it stays stable with an adequate growth rate for credit, and making sure loans are repaid are all key priorities for us. We also have to be careful about spending quality, as we are obviously trying to make sure we have a net increase in the amount of money coming in.

As Ecuador prepares to reenter the international bond markets, is there a concern that investors will still remember the Ecuadorean default in 2009?

We know that Ecuador does not have a good reputation. What we have said in our meetings with the major financial institutions is that figures show that Ecuador has been changing over the past seven or eight years. Investors must realize that the economy is now stable. They see that we are investing in health, education, development, and infrastructure. They see that Ecuador is more transparent than ever before. Every international financial organization has improved our risk rating, and this is allowing us to change the perception of Ecuador abroad.