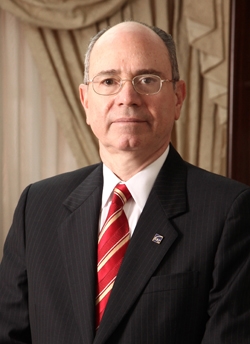 Alberto Diamond R. has a degree in Accounting and is a Certified Public Accountant. He has been in his current position since 2009. He also chairs the Financial Coordination Council of the Republic of Panama. Previous positions have included President of KPMG Central America and Senior Partner at KPMG Panama. He worked in the auditing and advisory fields for over 42 years, coordinating important projects, principally in financial services.

Share on:
"There have been changes throughout the year, with new players entering the banking sector and some exiting it."

Panama is the main banking center in Latin America. What are the benefits of investing in the Panamanian banking sector?

Panama offers various benefits for investors in the financial and banking sector. It is an open, globalized economy, and also a dollarized one. Strategically located geographically, it is hub that connects 68 destinations worldwide, and also has excellent fiber optic connectivity for data exchange. The International Banking Center (IBC) has a 40-year history, having been established in 1970. It boasts a skilled and trained banking and finance workforce. From here it is a simple matter to serve clients and financial institutions throughout Central America, the Caribbean, and the northern part of South America.

Both the Superintendency and the Banking Association are trying to attract new investors and members to the IBC. How many banks are members?

There are 91 licensed banks within the IBC. Of those 91 banks, 13 are representative offices that allow banks and financial institutions to promote and conduct business from an office in Panama, although they are not allowed to provide banking services in Panama. We also hold an international banking license, which allows banks to take their services to clients beyond Panama, to take deposits from abroad, and to extend loans to other countries. Just 28 of our members are thus licensed. The remaining 50 hold a general license, which allows banks to operate in the local market and abroad, so they can perform local and international business at all times. We try to attract new members by promoting the advantages of using Panama as a base from which to perform banking and financial operations throughout Latin America, as well as the local market. Ideally, we would like to attract at least three important financial institutions to Panama by the end of 2014.

The growth of the IBC has been impressive, and remains so in 2014 with a rising growth trend in evidence. Assets saw an increase of 7.6% in June 2014, and we evaluate the international and general licensed banks together. Internal credit to the private sector grew 8.7% compared to the same period in 2013. All indicators point to continued solid growth and efficiency, and the banks have strong rates of capital adequacy, making for a healthy environment. Meanwhile, the broader economy is also continuing to grow in 2014, albeit at a slower pace than in recent years. The banking sector will continue to contribute to Panama’s continued growth by financing the growth of the nation. In terms of credit growth, the main drivers are the retail and construction sectors. We continue to hold great expectations both for the IBC and the banking sector as a whole.

“There have been changes throughout the year, with new players entering the banking sector and some exiting it.”

In terms of the regulatory framework, how does Panama compare to other countries in the region?

The regulatory framework is comparable to those of other countries in the region. It is solid and in accordance with best practices and international standards. We might also mention capital adequacy, liquidity, corporate governance, and risk management. We keep track of these metrics to keep pace with global advances and developments. Regulations have consistently been updated over the past few years, and we have a roadmap to keep adjusting banking sector regulations to match international standards. Today, we are prioritizing capital adequacy, liquidity standards, and updating regulations pertaining to market risk.

There have been changes throughout the year, with new players entering the banking sector and some exiting it. The IBC remains very attractive to international players and investors. A player withdrawing does not denote a loss of assets, but that those assets have changed hands, having passed on to strong institutions, as demonstrated by those two examples from last year. There may be more mergers and acquisitions in the future, given the diverse size of the banks and considering that regulation is a significant burden for small- and medium-sized banks. Such entities are therefore more likely to seek mergers with other institutions for future growth.

What challenges do the 91 IBC members face this year?

Regulation poses a challenge. Capital adequacy and liquidity requirements mean that banks have to invest more capital, which stiffens competition. Furthermore, transparency, anti-money laundering initiatives, and anti-terrorism financing laws require improvements and changes to the legal framework, which, too, will place a burden on financial institutions. Banking is the most regulated and supervised sector in Panama, and this environment needs to be expanded to other sectors as well. Panama has an important task in terms of improving the transparency of the sector, and we are advancing in that direction.

The country has signed 19 double taxation agreements. What are your predictions for the next OECD review of the country?

We still have to get past phase II of that review, and have to consider changes to our legal framework accordingly. Last year we passed a law for the immobilization of better shares, but the timing was not right for the law to come into effect. This is one issue that the country needs to address, and the plan is to modify the law some time in the second half of this year. We have to move forward and keep making improvements to meet OECD requirements as well as Financial Action Task Force requirements for money laundering and terrorism financing. These are the issues we are addressing currently.

What does the Superintendency foresee for the Panamanian economy in the coming years?

We expect the economy to see continued growth. Ours is a solid economy, unique in the region, with its economic, political, and social stability keeping investors attracted. The sector contributes considerably to the economic growth of the country, providing not just financing to the local economy, but also to those of the region as a result of the international operations executed from Panama.