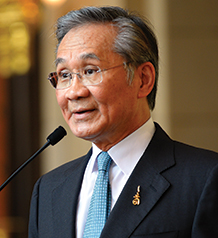 Don Pramudwinai studied political science at the University of California and obtained master’s degrees in international relations from the same institution and The Fletcher School of Law and Diplomacy. He joined the Ministry of Foreign Affairs in 1974 and has held a number of roles, including Minister of the Royal Thai Embassy in London and Director General of the Department of East Asian Affairs. Later, positions also included Ambassador of Thailand to the EU, Belgium, and Luxembourg, and Ambassador to the US. He became Minister of Foreign Affairs in 2015 after having served as Deputy Minister.

Share on:
TBY talks to Don Pramudwinai, Minister of Foreign Affairs of Thailand, on what the AEC will mean for Thailand, diversifying trade, and expectations for the year ahead.

What does Thailand’s integration into the AEC mean for the country’s diplomatic standing in the region, and beyond?

As one of the founding members of ASEAN in 1967, Thailand sees the launch of the AEC as a key milestone. We believe it will raise the diplomatic standing of all its members for good reasons. Above all, economic integration will bring tangible benefits to more than 600 million people in the region. Intra-ASEAN trade grew 10.5% on average during 1993-2013. ASEAN has also been outward looking. Beyond its own region, ASEAN has established five FTAs with six dialogue partners and will conclude the Regional Comprehensive Economic Partnership (RCEP) with the six dialogue partners. RCEP will be one of the largest FTAs in the world, with the potential to stimulate trade and investment for Asia and improve the livelihoods of half of the world’s population. Thailand will actively cooperate with other members to achieve the AEC vision for 2025: an economic community that is highly integrated, competitive, dynamic, people-centered and engaged at the global level. A team effort by the 10 members will push ahead important work such as trade and investment facilitation and further liberalization of the services sector so as to maintain the AEC as an attractive trade and investment destination for the international community. According to Baker & Mckenzie, it is projected that the AEC will realize its potential as the fourth-largest economy in the world by 2050. The AEC—as part of the ASEAN Community—will engage dialogue partners and stakeholders to ensure that the AEC remains relevant to the millions of people in the Community and beyond.

What are some of the most important provisions in the upgraded ASEAN-China FTA as it pertains to Thailand’s economy?

The successful upgrade of the ASEAN-China Free Trade Agreement (ACFTA) on November 21, 2015 will help ensure that our region remains resilient in the face of a slowdown in global economic growth. The ACFTA was signed over 10 years ago and the upgrade was long overdue. As ASEAN’s first FTA with a trading partner, ACFTA has helped to propel the establishment of other ASEAN+1 FTAs. The ACFTA upgrade will improve trade and investment opportunities between ASEAN and China through more facilitative customs procedures, more options for rules of origin, increased liberalization of services, increased investment promotion and facilitation, and increased areas for economic and technical cooperation. Thailand’s private sector will find the new rules of origin more flexible. As a result, more than 2,000 goods from Thailand could gain greater access to China. As the service sector is an increasingly important driver of economic growth for the AEC, ASEAN stands to benefit from greater opportunities arising from the newly liberalized services sector in China, such as tourism and financial services, construction, and engineering. Moreover, all parties stand to gain from measures such as investment promotion, industrial complementarity and production networks, information exchanges, and one-stop investment centers. Thailand hopes that the ACFTA upgrade will boost trade and investment between ASEAN and China and help to achieve the targets set by leaders for USD1 trillion in trade by 2020 and USD150 billion in investment by 2021.

The year ahead will see an increasingly globalized and interconnected world. There will likely be many challenges including threats and problems that know no boundary. At the same time, opportunities will be immense. A key to handle this is to further strengthen and expand international cooperation. In 2016, Thailand has set out to play a leading and constructive role in the global arena, particularly among developing countries. We are also laying down a 20-year strategy for the country that will provide guidelines for our positioning in the years ahead. Our goal is for the country to achieve stability, prosperity, and sustainability. The priorities of the current Thai government are to enhance the country’s strength in various ways, including increasing Thailand’s competitiveness.