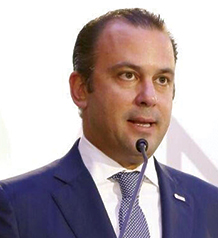 In his career at the Popular Group, Eugene A. Rault Grullón worked in risk and institutional banking. He later occupied positions in the planning and supervision of the financial execution of Banco Popular, including the vice president of planning. Between 2010 and 2013, he was vice president of the card area and was responsible for popular digital services and its brands AZUL and Avance. In addition to these duties, he currently also serves as President of the National Association of Young Entrepreneurs (ANJE).

Share on:
TBY talks to Eugene A. Rault Grullón, President of National Association of Young Businesspeople (ANJE), on the harmonization of the public, private, and academic spheres, the legal framework surrounding public transport, and reforms that will make the country more competitive.

What is ANJE’s role in linking the public, private, and academic spheres to spur innovation in the Dominican Republic?

Since its inception, our association has proposed a more unified link between government, academia, and the private sector. From a business and academic standpoint, ANJE has published studies in recent years that have identified opportunities to better align current university curriculum offerings with the demands of the labor force, specifically in business areas. This synergy is necessary in order to have a supply of young talent that is in tune with the capacities required to be successful and meet modern standards. The government should participate actively in these initiatives by integrating the public university system and the National Institute of Professional Technical Training curriculum in technical training with these same goals. In this day and age, innovation and entrepreneurship should be at the center of the discussion between these sectors of society.

What are the long-term economic benefits of eliminating the government fuel subsidies to transportation syndicates?

Any measures taken by the government to guarantee an efficient and competitive transportation sector, for both commercial and passenger use, is welcome news. We have always advocated for the right to freedom of enterprise and the abolition of monopolies as expressed in our Constitution. The actions taken to eliminate the taxpayer-funded diesel subsidies to certain transportation entities states a clear and definitive interest of the government to resolve issues that have proved troublesome due to the lack of a pertinent regulatory framework. The elimination of this subsidy will represent close to DOP200 million in monthly savings. It also eliminates the illicit trade of almost 3 million gallons of diesel that as part of this subsidy went directly into the informal sectors of the economy.

Which of the latest government reforms will make the country more competitive?

The Education Pact will have the biggest impact on the country’s competitiveness and overall projection towards the future. Dedicating 4% of the country’s GDP toward the country’s educational budget in 2013 was a huge step toward changing the “status quo.” We do have to state that changes in this sector will only be possible with the prioritization of investment in areas that provide a significant return of value. A specific effort must be made in the education of our teachers and performance evaluations tied to compensation. We trust that the effective implementation of this reform will have a positive impact on the Dominican Republic as a whole and will move the country toward becoming more competitive internationally. With the government’s lead, we will be able to claim that the country’s education system will be up to par with our international peers.

What are ANJE’s institutional goals for 2017?

The association aims to become an agent of dialogue by creating forums to articulate and discuss ideas towards reaching an agreement on comprehensive tax reform as dictated within the National Development Strategy. An overhaul of the actual tax structure would focus on increasing tax revenue, decreasing government expenses, and more effectively investing public funds and controlling the national debt. These should also be accompanied by initiatives to lower tax evasion and improve formality in the economy. We are also focused on competitiveness. Here, we want to execute initiatives that promote policies that contribute to the competitiveness and profitability of local business and start-ups. This includes the elimination of bureaucracy within the formalization process, the impact on businesses due to insecurity, and challenges in the commercial transportation sectors with the intent of making these companies sustainable, competitive, and profitable. Thirdly, we want to focus on institutions. We want to contribute to strengthening our national institutions and democratic system by promoting the reforms necessary to guarantee social and economic development in the future. These include promoting the election of non-partisan individuals to key positions in the judiciary branches of government and the promulgation of a Political Party Law and Electoral Law.