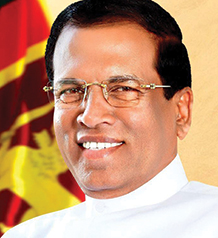 Maithripala Sirisena joined mainstream politics in 1989 as a member of the Parliament of Sri Lanka and has held several ministries since 1994. He was the general-secretary of the Sri Lanka Freedom Party and was Minister of Health until November 2014 when he announced his candidacy for the 2015 presidential election.

Share on:
TBY talks to HE Maithripala Sirisena, President of the Democratic Socialist Republic of Sri Lanka, on celebrating 60 years of relations with Thailand.

How would you assess the current state of Sri Lanka’s bilateral ties with Thailand?

The Democratic Socialist Republic of Sri Lanka and the Kingdom of Thailand have historically shared strong traditional and religious links. The establishment of diplomatic relations with the Kingdom of Thailand in 1955 was the formalizing of a longstanding, mutually beneficial friendship. Today, as the relations celebrate 60 years, both countries are given the opportunity to assess the relationship, seek novel ways of cooperation, and take the different aspects of the relationship to a higher level. In the context of Asia’s latent strength emerging in the world economy, Sri Lanka and Thailand need to seek diversified avenues to work toward the mutual benefit of the countries, their peoples, and the region. Sri Lanka values the support extended in international fora by the Thai government during the difficult period in our recent history, and we stand together with Thailand as steadfast friends.

What were the major talking points and achievements from your official visit to Thailand last November?

One of the major talking points of the meetings was shared religious ties; one of Sri Lanka’s most venerated Sacred Relics of the Gauthama Buddha enshrined in the Mahiyangana Raja MahaViharaya was brought to Thailand on the patronage of the Sri Lankan people to provide an opportunity for the Thai people to pay homage. It was indeed gratifying to learn that more than half a million Thai devotees paid homage to the relics during their two weeks in Putthamothon. His Excellency, General Prayut Chan-o-cha, also expressed his appreciation of the bringing of the Sacred Relics to Thailand, as well as the gifting of the Buddha statue to the Dhammarama temple in the Ayutthaya province. Discussions were also conducted on ways to address the significant trade gap between the countries. We discussed several areas of cooperation to bring this existing status quo to a more mutually beneficial status. The key is that the two countries be partners and not competitors in this path to benefiting our citizens. A wide range of issues of mutual interest covering politics and the economy, culture and religions, cooperation, agriculture and fishery industries, tourism, and person-to-person contacts were also discussed. The developments stemming from these productive talks will be reflected in the broadened areas of cooperation between the two countries in the coming years. We expect a further increase in bilateral relations in political, economic and trade, cultural, religious, and social spheres in the coming years.

Which economic opportunities has Sri Lanka identified in Southeast Asia following the recent integration of the AEC?

As the ASEAN region emerges as a unified economic community, Sri Lanka aims to be a constructive partner. My government works closely with many international partners such as regional bodies, governments, and other international organizations. The changes brought about since January have of course raised the profile of Sri Lanka and propelled the country toward a more harmonious and cooperative relationship with the international community. This has been reflected in the collaborative engagements in international fora. The re-establishment of rule of law and good governance to accompany the peace and security that had been won has resulted in an investment friendly environment of more trade in Sri Lanka. The increased FDI and presence of global companies in Sri Lanka have illustrated the recognition of the international private sector of these positive changes. Sri Lanka welcomes collaboration and looks forward to playing to the strengths of our economy. While ASEAN integration will provide a good platform for the member states to improve corporation among them, Sri Lanka sees a unique opportunity in it to develop trade relations with a group of countries that are culturally close to us. While we look forward to a booming renewables sector in Sri Lanka, we will continue to play an increased role as a partner facilitating naval transport between the AEC and the rest of the world.