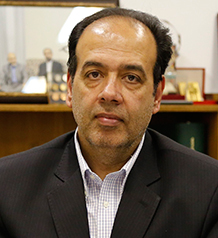 Dr. Mohsen Jalalpour is the former President of the Iran Chamber of Commerce, Industries, Mines & Agriculture (ICCIMA). Previously, he was the President of Iranian National Committee of International Chamber of Commerce (INC-ICC), the President of Kerman Chamber of Commerce, Industries, Mines and Agriculture for 12 years, and the Founder and Chairman of the Iran Pistachio Association. He has also held different managing positions in the private sector, as the Managing Director of Kerman Rahbaran Cement Co., Chairman of Trade Development Co., Pars Tadbir Pariz Investment Co., and Arman Roshan Arg Investment Co. He holds a bachelor’s in economics and a bachelor of civil engineering from Kerman University, Iran.

According to your 10-year plan, what role should the private sector play in the development of the Iranian economy?

After the signing of the JCPOA, all the countries showed their interest in reconnecting with Iran. At the same time, we were interested in connecting with the international economy. We learnt a great deal during the sanctions period, and low oil prices also convinced us of the necessity of changing our patterns toward a stronger private sector. In the foreseeable future, our economy will enter a new phase where all the development will be led by the private sector. The next 10 years will be very different from the previous 10, and we have many plans for venture capital projects across many sectors, such as agriculture and tourism.

What is the importance of attracting foreign investment to achieve 5% GDP growth?

Last year we had 5% growth only in the agriculture sector without any foreign investment. We also saw 4% growth in the oil and gas sector. But if we consider the unemployment rate in Iran, accounting for two and a half million to three million people, we have to reach more than 8% GDP growth this year to create enough jobs. In order to achieve this milestone, we have to absorb investment from abroad. Approximately 200 delegations have come to this chamber during the last few years. After visiting President of the European Parliament Martin Schulz in Brussels, he raised three points that are important to attract this investment, especially from Europe. First, he said Iran is not a consuming country and foreign companies have to invest in Iran by transferring technology making joint ventures. Secondly, Iran is not only a country with 80 million people; it is within a region of 400 million people and has great influence in those markets. Finally, he said all the agreements and MoUs that were signed earlier should be renewed and restarted in order to improve relations with Iran.

How does the chamber cooperate with the government and parliament to promote trade?

What role can Iran play in the international market?

When you look globally and focus on resources, population, history, and culture, Iran is a leader among all the countries in all sectors. Iran has had a deep influence on the history of humanity. Considering the power of our economy and our human resources, we have a leading position in the region as a transit hub from the north, south, east, and west corridors, with access to several neighboring countries. You will see the increasing influence of Iran in the near future, especially in energy and renewables. In tourism, mining, and minerals, we will also be a leader. We will be one of the safest countries in the near future and a source of production and distribution for international companies in the Middle East. Considering the geographical situation and access to oceans and seaports, Iran will be a hub for transporting goods to overseas markets. All this potential will be materialized if we develop our private sector.