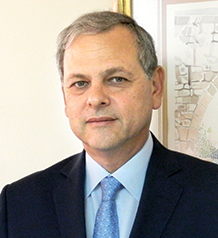 Share on:
TBY talks to HE Nabil de Freige, Minister of State for Administrative Reform, on the road map for sustainable development, e-government, and public sector wages.

In March 2015, the Prime Minister sponsored the launch of the roadmap for the national strategy of sustainable development, which aims to support economic, social, and administrative reform. What is the role of the Ministry for Administrative Reform in this strategy?

Our ministry is effective because it works with the World Bank, the EU, and some Arab funds that are granted as gifts for the Ministry of Administrative Reform. That said, we have a lot to do, especially in the area of e-government. E-government is about easing the life of our citizens; however, it is difficult to do in Lebanon as almost everything is politicized. Every decision made has to be accepted by every party, meaning everything takes a lot of time. My vision is to have a kind of public-private partnership (PPP), especially for the development of the e-government. All the Gulf countries are advanced in e-government, and many of them are managed by Lebanese companies, not local ones. These people naturally want to offer the same services to their home country, Lebanon. The idea of e-government started a long time ago, before I was a minister. I have an e-government unit here in the ministry. My vision is different; I want to outsource all the services while the e-government unit coordinates and leads the project. I want to divide the whole e-government process between different sectors for taxes, e-payment, general security, and e-learning for the public sector, for example. I want these private companies to come and undertake each sector, all coordinated and led by our e-government unit. We have already started creating some services, such as the general security section that covers passport services, and we are starting new services with the Ministry of Industry and the Ministry of Agriculture regarding permits; however, it is still weak.

What is Ministry’s position regarding the public sector wage funding?

When you don’t pay money from your pocket, it is easy to tell people you are going to give them such and such amount of money or pay increases, for example. Therefore, when you have a new law concerning salaries and decreasing taxes, it is important that if you are going to increase salaries in the public sector, you also have to state within the same law where that money is going to come from. If tax decreases are proposed, it also must be stipulated what will make up for that tax decrease. Decreasing taxes will naturally have an effect on wages as well. Increasing wages in such an environment is counterintuitive. If you increase wages for public servants, the army will demand a wage increase, and so will the public teachers, and so on. They all deserve it too. But if you want a well-functioning government you need well-paid public servants; hence, I’m now trying to convince the government and the parliament that we have to do that.

Looking forward to 2016, what are your biggest aspirations as the Minister of State for Administrative Reform?

My biggest aspiration is to launch our outsourcing of the e-government to attract investors, so procedures for official paperwork and formalities are accessible online, without having to leave their homes or offices. When you have a political crisis in a country, that’s where you need to invest. That’s why people need to invest in Lebanon.