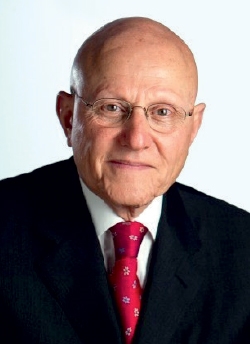 Tammam Salam has been Prime Minister of Lebanon since February 2014. Prior to that he served in the government as Minister of Culture during 2008 and 2009. His Excellency is a graduate of the Haigazian University in Beirut and also holds an Economics and Management Degree from the UK. He began his career as a businessman before entering the political arena at the beginning of the 1970s.

Share on:
When you accepted the post of Prime Minister for Lebanon’s cabinet of national unity in February 2014, what were your priorities for consensus building and structural reform of the Lebanese […]

When you accepted the post of Prime Minister for Lebanon’s cabinet of national unity in February 2014, what were your priorities for consensus building and structural reform of the Lebanese economy?

History has shown that Lebanon can only be governed by consensus. We are at our best when all parties rally around a cause or jointly agree on how to address a particular issue or a set of issues. Accordingly, given the divisiveness that characterized the political environment at the time, it seemed imperative to seek a common platform to which all parties could be drawn, which took time. During that period, economic difficulties were becoming more acute, and the impact of the Syrian crisis and regional disturbances were weighing heavier on Lebanon. First and foremost, as is typically the case in Lebanon, it is essential to establish a minimum level of security accompanied by political stability if business activity is to regain momentum, and we have been successful at that despite what took place recently between the Lebanese Armed Forces and terrorists that infiltrated from Syria. Simultaneously, we are trying to trigger growth through a set of policy proposals relating to infrastructure and services. This Cabinet may not have the time to complete major reforms, but it will pave the way and point the decision-making process in the right direction.

How successful has your cabinet been in addressing these priorities and building consensus?

Success is measured by results, and our government has achieved a lot in a short space of time, especially when such achievements are measured in a relative perspective. By way of illustration, we have implemented an exhaustive security plan that has made a fundamental contribution to overall stability. Another practical example is that we have proceeded with over 40 nominations in key positions in various administrations, a process that had been paralyzed for many years. In addition, we have passed several important decrees that were not only indispensable for the resumption of smooth operational procedures and the elimination of bottlenecks, but also vital for the support of private sector initiatives and investments. We remain, however, constrained from going radically forward because of the vacancy in the Presidency of the Republic and delays in legislative action.

How important is the continued formation of Lebanon’s cabinet for attracting FDI and for the proper functioning of the private sector in Lebanon?

It is a known fact that investment flows are almost perfectly correlated with political stability and economic visibility. What is remarkable is that we have been able to maintain the macro-economic reality and the level of activity we have despite all the unsettling events that surround us. This demonstrates that market confidence in the resilience of Lebanon remains high, and that, as in the past, growth will not fail to bounce back as soon as the political uncertainties start to dissipate.

How is Lebanon strengthening its international and regional trade links and working to improve its competitiveness in core sectors of the economy?

Much remains to be done in this area. We have left unaddressed for many years major issues relating to helping our main productive sectors become more cost-effective, competitive, and productive while safeguarding our environment. On the trade front, there is need to reinforce the implementation of existing agreements and to conclude many new ones with countries and groups of countries that offer appealing opportunities for our products. What is sure is that we are not sufficiently capitalizing on the Lebanese abroad. The substantial potential they represent constitutes a great asset in enhancing the probability of success for all economic initiatives.

In what ways have your attempts to moderate the country politically precluded the strengthening of core sectors of the economy, and particularly the fields of telecommunications, energy, and water?

It is true that ensuring political cohesion consumes a lot of energy. Nonetheless, we are examining adequate reform proposals in all the fields you have mentioned. One such solution is public-private partnerships (PPPs), which will allow us to share risks and enhance service quality by bringing in the private sector to do what it does best.

What will be the next steps in introducing independent power producer (IPP) schemes in the electricity, telecommunications, and water sectors? How strong are the investment prospects that will be presented by such partnerships?

IPP solutions are already available in Lebanon. A national plan organizing the energy sector was approved by the government three years ago, and is gradually being implemented. Other opportunities exist in the water sector, and in tourism infrastructure and facilities, for example. We also expect demand to be boosted when oil and gas companies start to set up their business operating platforms in view of their offshore exploration and production activities. Finally, we expect a lot from revived capital markets that will help in financing domestic companies.

Which structural deficiencies in Lebanese politics and the economy have been exacerbated most by the Syrian refugee crisis?

Politically, from the onset of the crisis, there has been a polarization around regional issues that have caused a divide. I feel, however, that this is behind us now because of the immediate domestic concerns the government and the body politic is immersed in, and also because of the multiplicity and complexity of the regional events and their consequences on Lebanon. As for the economy, Lebanon has always managed to correct imbalances through a vibrant private sector. In addition, at the public sector level, there is now a high level of consciousness regarding the need for greater fiscal discipline and an amicable framework for foreign investments.

How effective has international assistance and aid been in offsetting the negative affects the influx of Syrian refugees has caused to the Lebanese economy?

We do not characterize the Syrians who escaped the fighting in their country by coming to Lebanon as “refugees.” They are temporarily displaced people that we have welcomed for humanitarian reasons. Having said that, it is obvious that no country can absorb a third of its population in less than 18 months without major economic and social trauma. The needs to keep afloat the Lebanese economy as a result of this influx are massive and have been estimated by the World Bank at $7 billion. No aid package of this magnitude can be put together in months, especially in the difficult times traditional donor countries are living through nowadays. Consequently, an imaginative approach is needed based on the following paradigms: one, this is not a traditional crisis. It is expected to be a protracted affair that will take many shapes and, hence, is going to require adapted, evolving responses. Two, humanitarian aid alone cannot possibly be the answer. What is needed is support for a structural development policy that will inject aid into vital sectors.

In a time of great change political and social upheaval in the region, what kind of geopolitical role do you want Lebanon to play?

We believe that Lebanon should always remain, no matter the cost, a haven for all those who cherish freedom and those who seek refuge from oppression. It should also continue to be an example of liberalism, and of an open economy. Those elements combined make it truly unique. It is this uniqueness that will allow Lebanon to play a much larger geopolitical role than its size and means may suggest it could.