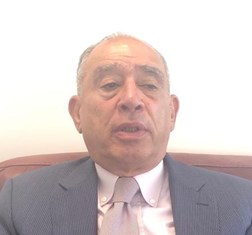 Throughout his life, Antoine E. Amatouri has been involved in a number of business ventures spanning across different sectors, from transportation and shipping to restaurants. In 2013, he helped Gulftainer win the concession to operate the new terminal at the Port of Tripoli for 25 years. He has been on the board of the Lebanese Businessman Association (RDCL) since 1986 and on the Board of Directors at Port of Beirut since 1997. Amatouri holds a bachelor’s in business management and a master’s degree in finance and management, both from St. Joseph University, Beirut.

Share on:
Gulftainer has earned the right to call itself a leader in the Lebanese shipping industry, a status it hopes to strengthen with a new hub in Tripoli.

What attracts a company to invest in Tripoli?

There are many advantages of doing so. First, in terms of infrastructure, we have a large port, an airport, and an economic zone, with plans for expansion. This enables Tripoli to compete at the regional level. Additionally, Tripoli is destined to serve the nascent oil and gas industry in Lebanon. Additionally, Syria is less than 30km away; once reconstruction works begin, Tripoli will serve as a connecting platform for neighboring countries. Our current problem is that infrastructure in Tripoli is not utilized enough to its maximum potential; this discourages further expansion and investments. Hopefully, we will shortly witness a turnaround; Tripoli has all it takes to be one of the key regions of Lebanon.

What triggered your investment in the expansion of the port of Tripoli?

I started investing in the expansion of the port of Tripoli a few years ago, moving terminal containers from Beirut in 2016. This was because of the comparative advantage of the port. The Port of Beirut is right in the middle of the city and on valuable land—especially taking into consideration the limited availability of land in the country. The location limits the possibility of expansion and increased traffic congestion. Compared to the Port of Beirut, the Port of Tripoli has a clear advantage in terms of location and expansion possibilities. The port is well installed and connected to other regions, especially since it has the potential to become one of the main suppliers to Syria. We started in 2016 with 10,000TEUs, reaching 22,000 in 2017 and 30,000 in 2018. Our goal is to reach around 300,000TEUs by 2020, which would represent full capacity utilization for Phase I of the port master plan. In 2018, thanks to a deal with French shipping company CMA CGM—one of the largest shipping companies in the world—we posted a significant increase in throughput and expect to reach a target of 120,000TEUs for 2019. We are also looking forward to receiving other major shipping lines going forward. Most of the expansion of the port of Tripoli has been self organized. Since our activities benefit the broader economy of Lebanon, both by developing Tripoli into a major hub and decongesting Beirut, we look forward to seeing a major effort on the part of the government to establish a national logistics strategy.

What is Gulftainer’s global reach?

Gulftainer is the largest privately owned port operator in the world, based in Sharjah, UAE, and operates ports across different countries and continents, including the US, Brazil, Lebanon, Iraq, Saudi Arabia, and the UAE, and is actively pursuing new projects to increase its portfolio of terminals. In Lebanon, Gulftainer is the operator of the port of Tripoli. Gulftainer Lebanon aims to become one of the top 10 port operators worldwide. This is set to occur following natural developments within the industry, where automation is becoming prevalent, requiring large investments from consolidated groups.