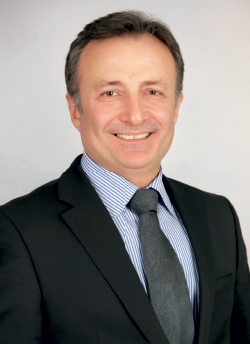 Osman Kazdal holds a degree in Economics from Uludağ University and an MBA from Marmara University in Istanbul. After graduation, he started out in sales supervision and worked at all levels of sales management between 1990 and 2010. He is currently the General Director of Coca-Cola Almaty Bottlers. He also serves on the board of AmCham and the Prime Minister’s Council to improve the investment climate.

What have been Coca-Cola’s milestones over the past few years?

We have been present in Kazakhstan for the past two decades, and in particular over the past five years have registered robust growth momentum. What’s more, this has been the case despite a slight decline across several categories of the FMCG market. We are also working at close to full capacity, which will be our largest challenge over the coming years as the demand for Coca-Cola grows.

Which of your products do especially well in the Kazakhstani market?

All categories in the beverage sector are experiencing growth. Our flagship brand, Coca-Cola, is crucial for us of course, and is spearheading growth in this sector, which is a scenario we would like to maintain. We firmly believe that its success also helps to develop the other categories and brands.

How do local tastes affect your marketing strategies?

I perceive a change occurring in consumer habits and preferences. Hot tea is very important in terms of beverage consumption, and surveys show that it is still considered part of a meal in Kazakhstani culture. This is a challenge for us as we would like to see Coca-Cola viewed in the same light. In that respect, our long-term strategy is to continuously work on the “Coke & Meal” concept and provide more choice for our consumers at the dinner table. We are also working in other categories, such as the social consumption of Coca-Cola. Even TV viewing is an important occasion for us, for which we also have strategies in place. However, hot tea remains the greatest challenge to overcome. During the crisis of 2009, the consumption of local lemonades grew, but that trend has reversed over the past three years, with Coca-Cola having replaced those products as the sector’s growth engine.

“ Our plant in Almaty is one of the most state-of-the-art beverage plants in the world, able to simultaneously produce almost any kind of packaging. “

How has the growth of a fast food culture impacted sales?

When out and about, it is common to see new restaurants and fast food eateries. However, while their quality is increasing, there is no real change in terms of the number of restaurants. As old, traditional restaurants are replaced by more modern venues, quality is certainly improving, but this is marked by slow growth. The development of the fast food sector occurs in parallel with the opening of new shopping malls. In 2014, two large shopping malls are set to open in Almaty. Yet, while this is a welcome development, we would like to see more occur.

What prompted the planned development of a new plant in Astana?

Our plant in Almaty is one of the most state-of-the-art beverage plants in the world, able to simultaneously produce almost any kind of packaging. There are larger, more advanced plants, but those generally have a specific focus. Here, we have an all-in-one model and are able to produce everything from glass bottles to cans, cartons, PET packages, and much more. The process is limited, however, by aspects such as land, energy, and logistics, with the latter being highly dependent on rail links. This is essentially why we decided to develop an alternative supply point. Given Kazakhstan’s geographical conditions, Astana seemed like the best place to locate a new production facility. Accordingly, we have purchased the land and are beginning to develop the details of the project.

What is the scale of the project?

It is certainly set to be a large investment, and will be executed incrementally. It will have two lines to begin with, and by 2020 will have become a mega plant. Eventually, it will be around the same size as our Almaty plant.

How do you perceive the investment climate in Kazakhstan?

We believe that our business will continue to grow as the Kazakhstani economy becomes more wealthy and prosperous. Coca-Cola Almaty Bottlers is one of the first FMCG companies to invest in Kazakhstan. We believe in the prosperous future of Kazakhstan. Innovation and creativity are developing quickly here, and so government support for the investment climate should be on par. In terms of the economy, this is a promising address for investors, and I have noticed that there have been many enquiries from foreign firms looking to invest. The investment climate is also affected by the global economy, and as it begins to recover Kazakhstan’s development will accelerate.

This is becoming an important region for Coca-Cola, which is investing $50 million in Uzbekistan in 2014. What are the company’s overall plans for expansion in Central Asia?

Uzbekistan is not in our area of responsibility, but we are a part of a larger group that has activities in Kyrgyzstan, Tajikistan, and Turkmenistan in Central Asia. Central Asia has strong momentum and offers higher growth compared to other parts of the world. Our flagship is Kazakhstan, however, which is the most promising economy in the region.

What is your outlook for the medium term in terms of Coca-Cola and the industry as a whole?

Even though we see a slowdown, especially in the second half of 2014, we believe momentum will grow. Astana’s World Expo 2017 will also bring good momentum to the economy at large. I do not see any large risks for the medium term that will prevent the development of the country under the Strategic Plan 2030. Considering the rest of the world, it is logical to invest in this region. As a company, we believe in Kazakhstan, and that is why we continue to invest here.

How do you perceive the differences between Turkey and Kazakhstan?

There are no large differences. Turkey’s beverage sector is a little more developed, with a higher per-capita consumption rate, although alcohol consumption is higher in this region.