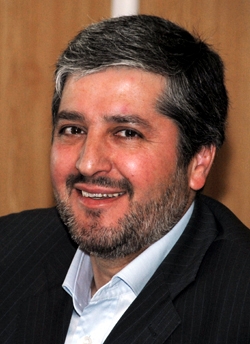 Farhad Parvaresh was born in 1957 and obtained his Bachelor’s degree in Mechanical Engineering and a Master’s degree in Industrial Management. He began his professional career in the industry in 1986 and has been in his current position since 2009. Previous positions include Iran Air Director General in Germany and Deputy Managing Director for Planning & Management Services.

Share on:
TBY talks to Farhad Parvaresh, Chairman & Managing Director of Iran Air, on the airline's goal to become a self-sufficient role model for the international airline industry.

How did Iran Air become one of the leading airlines in the region?

Iran Air is Iran’s national air carrier. The airline was created by a merger of two companies before the Revolution, and our experience goes back about 70 years. We provide a benchmark and an exclusive model for air carriers domestically, regionally, and internationally. Iran Air was the first airline in Iran to operate jet aircraft. We were also the first to fly to the US with the 747-SB, from Tehran to New York (via London). We have now expanded to approximately 32 destinations internationally. We are the first airline in the region to provide training services for our personnel, including but not limited to operations, maintenance, and customer service. Iran Air has a well-organized human resources and training center, and we offer programs in two languages: Farsi and English. In 2011, the Iran Air training center was selected as one of the top 10 training centers in the region by the International Air Transport Association (IATA). In terms of safety and passenger loyalty and satisfaction, Iran Air is also a leading airline in the region according to IATA audits. Iran Air has a well-planned, integrated network and has done its best under difficult conditions to expand successfully. Today, we have 52 aircraft, up from just a dozen or so at the time of the Revolution.

Iran Air is part of a divestment project run by the government. What opportunities do you see emerging from the privatization project?

Regarding the privatization program for Iran Air, there are two subsidiaries involved: Iran Airtour and Homa Hotel Group, which includes five hotels in Tehran, Shiraz, Mashhad, and Bandar Abbas. Iran Airtour carries 2.5 million passengers per year, with about 20% on international routes. Iran Airtour previously operated Tupolevs, which have been grounded, and now all of its flights are operated by Boeing MD-83 aircraft. Iran Airtour was 100% privatized and separated from Iran Air, and it is doing very well. The Homa Hotel Group will also be privatized. About 90% of the revenue from the hotels comes to Iran Air, the owner of the company. Iran Air itself will probably remain about 15% in government hands and 80% will be held by private investors; we expect 5% to remain owned by employees. Foreign companies are legally prohibited from becoming shareholders of Iran Air unless they are approved by the government.

How have you expanded your destinations over the last few years?

New destinations depend on demand and company policy. In the past two years, we expanded our routes mostly to our neighbors like Iraq, where many of our citizens want to go to on holy pilgrimages. We fly to Baghdad and Najaf, two very important cities. There is a high demand for those destinations. We add destinations based on the government’s needs.

“We provide a benchmark and an exclusive model for air carriers domestically, regionally, and internationally.”

How many passengers do you carry annually, and which destinations have the highest demand?

We carry 6 million passengers per year, or about 8.7 million including Iran Airtour, but it is now a separate company. About 6.2 million passengers are domestic and the rest are international. We operate about 100 domestic flights a day to some 28 destinations. Internationally, we have 32 destinations. The highest demand is for the Tehran-Kuala Lumpur route, for which we have five or six flights a week with 747s. It is one of our longest routes, with eight hours of flight time. One factor for such a high demand is that Iranian nationals do not need visas to visit Malaysia. Domestically, Tehran-Mashhad is important, since it’s a holy city. Flights between Tehran and Bandar Abbas, as well as Tabriz, Shiraz, Ahvaz, Rasht, and Isfahan see large passenger volumes. Domestic fares are regulated by the government, but this isn’t the case with international fares. Due to strong competition among foreign and domestic airlines, supply and demand controls the international fares. We believe most of our international passengers prefer to fly Iranian carriers because they get a chance to communicate in their own native tongue during their flight and enjoy Iranian cuisine. When given a choice, I think Iranians prefer to travel with their national carrier.

Which innovations would you like to see in the aviation infrastructure in Iran in the future?

We want to expand the company, add new routes, and provide better service domestically and internationally. Until 10 years ago, we sent our aircraft abroad for maintenance and overhaul; however, we are now more self-sufficient and do 100% of the maintenance and overhaul in Iran in our own hangars, from light to heavy checks. The company is not 100% self-reliant when it comes to aircraft components, but we are working to improve our proficiency in this area. We are able to lease aircraft from abroad and operate them here, but I believe we should buy and have our own aircraft and train our own pilots and technicians as well. Leasing aircraft takes care of short-term business needs, but this isn’t enough for Iran. We need to transfer technology to Iran and build up the airline industry here. Our objective should be to invest as much in the technical side as on the commercial side. Iran Air provides services to 85% of the airlines that fly to Iran. In Mashhad, there are six or seven foreign airlines operating, and they are efficiently serviced by Iran Air. Also, when you look at other smaller airline companies in Iran, you’ll find that they are mostly staffed by retired and former Iran Air personnel. This is a source of pride for us, and it is a consequential result of nearly 70 years of field experience.