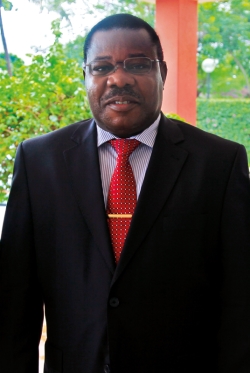 Born in the southern province of Inhambane, Salvador Namburete speaks Chitswa, Bitonga, Portuguese, English, and French. He holds a degree in Economics from the Eduardo Mondlane University in Mozambique, where he later taught International Economics. He has a Master’s Degree in International Trade and Finance from Lancaster University, and another one in Corporate Finance from the American University in Washington, DC. He was appointed Minister of Energy following the general and presidential elections in Mozambique in 2004.

Share on:
It is with renewed pleasure that we have the opportunity to discuss questions regarding the development of the energy supply industry in our country and the overall African continent. This […]

It is with renewed pleasure that we have the opportunity to discuss questions regarding the development of the energy supply industry in our country and the overall African continent. This is a relevant and current subject. After all, energy is one of the pillars of economic and social development in any country.

Mozambique is definitely among the countries that offer the most favorable environments, from an institutional and a legal point of view, as well as in business-opportunity terms. The government maintains a steady commitment to always improve this business environment, and continues to deserve preference as a privileged destination for investments from the public or private sectors or even public-private partnerships (PPP).

In this regard, I would like to point out that in the last two years we have had the privilege of hosting the African Conference of Ministers of Energy (CEMA), a central organ of continental coordination for energy policies that, since its creation, has played an important role as a platform of experience sharing and support for our governments’ efforts to strengthen and complement the initiatives of regional cooperation. Additionally, it lends a common voice to the political dialogue surrounding energy development in Africa.

“Mozambique is definitely among the countries that offer the most favorable environments, from an institutional point of view.”

Effectively, the Declaration of Maputo, adopted by CEMA during a session held in November 2010, emphasizes a number of priority actions. Firstly, it stresses the urgent necessity to develop and strengthen national, regional, and continental strategies for the development of sustainable energy supplies through the diversification of a variety of energy resources available across the continent. Secondly, our will is to promote renewable energies in a joint effort to decrease the effects of greenhouse gases and search for solutions for all questions related to climate change, with technical and financial support from emerging economies.

The development and utilization of energy resources demands large investments to build the required physical infrastructure with particular reference to dams and respective transportation links to get the resources to consumer centers.

All of this constitutes a great challenge that requires resources on a scale that, for the majority of African countries, goes beyond the capacity of public funding. In this perspective, PPP shows itself as one of the options for the materialization of ventures of this magnitude.

We are delighted that Mozambique is cited as a reference example on the creation and maintenance of an atmosphere of peace and political stability, which has allowed the consolidation of an attractive environment for investment, including projects of large dimensions. Some examples of those projects include Mozal, the Cahora Bassa hydroelectric dam, Pande and Temane’s natural gas, coal from Moatize and Benga, Ncondezi, and Jindal.

These political and economic factors sustain themselves in an auspicious institutional and legal framework that includes modern legislation, such as a clear definition of institutions’ competencies, namely in the definition of policies, regulations, and implementation.

The pace of economic and social development that the country has been seeing over the past years reflects the increase in energy demand for such economic activities as the realization of public development programs, for the expansion of energy access to an increasing number of Mozambicans. Energy demand has increased over recent years by an average of 12% a year, corresponding to more than 80 MW.

The economic recovery, already a reality, allows us to anticipate positive trends toward the realization of investments aimed at meeting the needs of energy-intensive sectors.

Currently, Mozambique has many projects under development, the conclusion of which will substantially contribute to an increase of energy availability for major projects around the country, including Cahora Bassa (1,245 MW), Mphanda Nkuwa (1,500 MW phase I and 900 MW phase II), Boroma (200 MW), Lupata (600 MW), and e Lurio (120 MW) among others.

The majority of these projects are situated in the Zambezi River Valley, a reason why the Tete—Maputo energy transportation corridor project, also known as Dorsal Spine, is under construction. This infrastructure will allow for the energy produced in the region to flow to large consumers at the domestic level, as well as to the regional market. The development of the energy sector cannot depend only on one type of resource, even if it is abundant. In Mozambique’s case, this means that, besides hydro resources, other existing resources must be utilized as well, such as coal and natural gas.