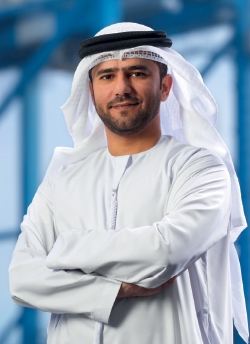 Mohamed Juma Al Shamisi is an experienced maritime executive, having been Executive Vice-President for ADPC Ports Unit. Prior to ADPC, he led the Business Development and New Buildings Projects Unit for Gulf Energy Maritime. He has an MBA and Graduate Certificate of Management from the University of Tasmania, as well as an Advanced Diploma of Applied Science from Australian Maritime College, and is the recipient of the Australian Maritime College’s Baird Publication Prize for Best Performance in Navigation in any seafarer (Deck) course and a Sheikh Rashid Award for Academic Excellence.

What does Khalifa Port signify for Abu Dhabi?

Abu Dhabi’s Zayed Port has served the city for the past 40 years, but in 2011 it reached 767,000 TEUs, exceeding its intended capacity of 750,000 TEUs. Thus, at handling capacity, a new, modern port with room to grow was required. The answer was the new flagship, state-of-the-art Khalifa Port. Located at Taweelah, Khalifa Port is the gateway to Abu Dhabi. It has an initial capacity of 2.5 million TEUs, with space to expand according to demand. Today, it handles all container traffic for the Emirate, supporting its long-term vision of strong, sustainable economic prosperity. Abu Dhabi Ports Company (ADPC) was formed in 2006 from the restructuring of the Abu Dhabi Seaports Authority, and is the master developer of ports and industrial zones in the Emirate of Abu Dhabi. Our ports, which include Khalifa Port, Zayed Port, and Musaffah Port, as well as the Western Region ports, such as Delma Port, Sir Bani Yas, and Al Sila, all provide vital infrastructure for the maritime industry, promoting the flow of imports and exports, while supporting local communities, sustainable businesses, and the wider economy.

They are additions to Abu Dhabi’s commercial maritime infrastructure. While we have allowed for and do provide a free zone at Kizad to cater for a variety of investor interests, our main focus is attracting industry-related investors to Kizad’s vertically integrated clusters, where raw materials will be used by midstream producers and downstream manufacturers and then exported via the excellent transport links, which include, road, air, rail, and, of course, sea. ADPC is bringing a new proposition to the table with Kizad’s dedicated industrial production, logistics, and distribution zone, which supports both Abu Dhabi Economic Vision 2030 and its future international ambitions. Also, ADPC is developing all of the Emirate’s non-oil ports, for example, the 53-kilometer-long channel to serve our port in Mussafah, a thriving industrial area on the outskirts of Abu Dhabi city. The new channel is the second largest in the region after the Suez Canal and is capable of handling far larger ships, which will help support industrial and business growth in this important area. In addition, we can also confirm that it will be the very first port in the UAE to be integrated with the new intra-Gulf countries rail network, which is currently being developed by Etihad Rail.

What trends have you noticed in incoming vessels?

Vessel movements into Abu Dhabi increased in 2012, and our most recent results for 3Q2013 indicate just over 9,000 vessel movements. It should be clear that while Khalifa Port will become the hub port, Zayed Port, which has served Abu Dhabi for the past 40 years, will continue to serve the UAE’s capital in most areas, aside from container shipments. Because of its size and draft, Zayed Port was never a hub; it was always a feeder port. That is why the size and profile of the vessels we are now seeing are different from those of previous years. The first vessel that entered into Khalifa Port carried around 12,000 TEUs. This would never have been possible at Zayed Port.

How important is the trade increase between Africa and the GCC for ports in the UAE?

People are talking about shifts of trade from West to East, but I think it is clear that there are a number of trading shifts taking place globally, and I think it has happened faster than anybody anticipated because of the financial crisis. There is more trade between Africa and Asia and the inter-Asian markets, so ADPC is working closely with Singapore and Hong Kong and other ports in Asia to identify best practices and operational management excellence. For our part, we see ourselves as being in the same category in that we can offer world-class facilities; however, we have only just started. We cannot compare ourselves in terms of volumes to the first or second busiest port worldwide—not yet anyway.