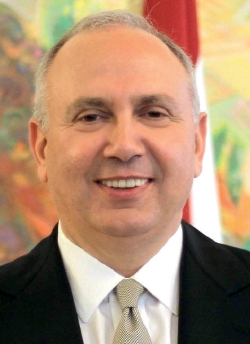 Ziad Hayek was appointed Secretary General of Lebanon’s Higher Council for Privatization by the Council of Ministers in June 2006. Prior to that, Hayek was Chief Executive of Lonbridge Associates Ltd. (London), a telecoms and technology investment banking firm. Other positions he has held include: Senior Managing Director of Bear Stearns & Co., President of Indosuez Mexico, S.A., Vice-President of Salomon Brothers, and Vice-President of Citibank in New York. Hayek has an MA in International Management from the University of Texas at Dallas and has studied business administration at the Instituto Tecnológico y de Estudios Superiores de Monterrey in Mexico. He has served on a number of corporate boards in the US, Mexico, Switzerland, and Lebanon. Hayek speaks 11 languages.

Share on:
You have been the architect of public-private partnerships (PPPs) in Lebanon, and you have been working hard to achieve a political consensus. Where does that process stand? We are still […]

You have been the architect of public-private partnerships (PPPs) in Lebanon, and you have been working hard to achieve a political consensus. Where does that process stand?

We are still trying to get legislation passed. In Lebanon, there is nothing that prohibits the government or private sector from engaging in PPP projects; however, we have a history of less than satisfactory projects on both sides, mainly for three reasons. One is that these projects have typically not involved all the stakeholders in the design, tendering, and contracting process. The second is that there has not been enough transparency. And the third is that the people negotiating the PPP contracts, especially on the government side, have no real experience in PPPs. What we are trying to do in the proposed legislation is address these three issues: ensure all the stakeholders are involved, make sure there is a transparent tendering process, and create a PPP Unit within the Higher Council for Privatization (HCP) to become the government arm for designing, negotiating, and tendering PPP projects. The delay in establishing this legislation has two main causes. The first one is that we have had governments that have only lasted in office for a year and a half on average, and their priorities have not been on PPPs. The second reason has been that some ministers have fought PPP in the format that we are presenting it because they prefer the old way where the minister decides who they give the PPP contract to. I think this is unacceptable and will only lead to more problems with the private sector.

As an advocate of all-out privatization for telecommunications, what is your vision for the liberalization of that sector?

The 2002 legislation that we have in place is good. Unfortunately, it has not been applied. Firstly, it calls for the creation of a regulatory authority and the merging of the three directorates that belong to the Electric Board and to the Ministry of Telecommunications into one incumbent operator fixed-line and mobile telephone company, Liban Telecom, which would then be privatized at some point; in part by selling a minority stake to a strategic partner, and by floating the rest on the Beirut Stock Exchange. Two is creating Liban Telecom, and three is privatizing the mobile networks. Throughout this process, we can open up more to competition, for example in the fixed-line market.

Telecoms are a major source of revenue for the government. How will this be affected?

It is fake revenue; we tax telecoms beyond reason. Instead of having cheap telecommunications that will encourage investment in the ICT sector and in the knowledge economy, we are taxing that infrastructure, which is needed more by our young people for developing their potential so that we can collect enough money to pay for the deficit in the electricity sector, where we have a very inefficient form of subsidy. We subsidize consumption in Lebanon, instead of subsidizing people in need or underprivileged parts of society like in other countries.

How credible is the Blue Gold water project in your view?

In terms of funding, I believe the amounts that are being talked about are right. It is not rocket science; water infrastructure is something basic. Does it cost a lot of money? Yes. Does the government have the money to fund it? No, it does not. Can the private sector play a role? Of course it can. There can be many PPP projects in water management. Can it be done today? The answer is no, because the Ministry of Energy and Water does not have the expertise to handle PPP projects. It does not have plans for specific projects that are in the form of information memoranda that can be circulated to investors. There is much preparatory work that needs to take place, and because these are large projects it means de facto that large investors will be needed and large investors are not going to want to play ball unless there is transparency.