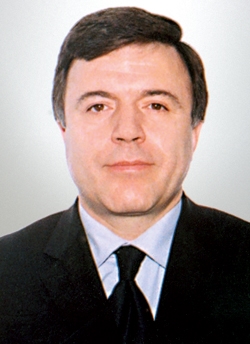 After studying in both Baku and Moscow, Huseyn Bagirov became a full professor in 1990 and served as the Rector of Western University in Baku in 1992. In 1998, he was a Fulbright Professor at Indiana University. From 2000 to 2001, he served as Minister of Trade before assuming his current post as Minister of Ecology and Natural Resources. In addition to serving as Minister, he was elected President of the Air and Extreme Sports Federation of Azerbaijan in 2005 and has served in that role ever since.

Share on:
What have been some of the main successes that the Ministry has achieved? As a result of the consistent efforts and constant attention to environmental protection on the part of […]

What have been some of the main successes that the Ministry has achieved?

As a result of the consistent efforts and constant attention to environmental protection on the part of the worthy successor of great leader Heydar Aliyev, President Ilham Aliyev, the environmental situation in the country has dramatically improved. The rapid economic, social, cultural, and other developments of the country, and the successful implementation of the national oil strategy, have contributed to the solution of environmental problems. As a result of the successful environmental policy pursued by the President, significant achievements have been made in the area of the protection and environmental monitoring of forests, the protection and increase of biological resources, hydrometeorology, and geological exploration. The attention paid by President Ilham Aliyev to the implementation of state programs on environmental protection, the signing of relevant decisions to ensure the effective resolution of environmental issues, and the announcement of 2010 as “the Year of the Environment” are evidence of the fact that this area is a national priority. It is no coincidence that the United Nations Environmental Program (UNEP) named the capital of Azerbaijan, Baku, alongside Genoa, Italy, and Geneva, Switzerland, as the three European cities to mark the World Day of the Environment in 2010. This, above all, is the successful result of the consistent and focused activities carried out by President Ilham Aliyev to develop economic, social, cultural, and other aspects of life in the country, including the protection of the environmental balance.

How would you describe efforts to promote the creation of national parks in Azerbaijan?

Due to the annual growth of reforestation activities in an effort to protect and enhance forests, the area of forests exceeded 1 million hectares over the last 10 years—an increase from 11.4% to 11.8%. Reforestation activities were carried out over an area of more than 104,500 hectares, where 82 million trees were planted, 307 million seed grains sown, and 2 million tons of seeds produced. It is worthy to note that over 6 million trees were planted in Azerbaijan in 2010 alone. As a result of the consistent measures to develop the protected natural territories and create an environmental network, the republic currently has 893,000 hectares of protected natural territories, including nine national parks, 11 state reserves, and 24 natural wildlife sanctuaries. Whereas in 2003 the protected natural territories accounted for 5.5% of the country’s territory, now they cover 10.3%. The establishment of national parks commenced in 2003. At present, 3.72% of the country’s territory lies in national parks. The establishment of the Gizilagaj Seaside National Park is in its initial stage. The feasibility study on the establishment of the Zaqatala-Balakan Biosphere Reserve has just finished. Upon the establishment of the National Park and Biosphere Reserve, the size of protected areas will constitute 12% of the country’s total territory.

What measures are being taken to promote the diversity of Azerbaijan’s fauna?

For the first time in the South Caucasus, a wildlife restoration and rehabilitation center has been established within the Gizilagaj National Park, and it has been provided with the latest medical and veterinarian equipment. Measures have also been taken to increase the population of rare and endangered biological species, to reintroduce them to their historical habitats, and to create sustainable populations. A project on reintroducing gazelles to their historical habitats began with support from the Heydar Aliyev Foundation in 2009. Up to 100 gazelles were resettled in three historical habitats in the project. Satellite and visual observations of the gazelles suggests that they have adapted well to their new habitats and registered natural growth. On December 24, 2010, President Ilham Aliyev and his wife Mehriban Aliyeva watched the process of releasing the first herd of gazelles—21 head—into one of their historical habitats near the Pirakushkul settlement of Absheron District. According to an order of the President of the Republic of Azerbaijan dated December 26, 2008, work is currently under way to establish a modern zoological park in Azerbaijan.

“The country’s correct socioeconomic development policies have brought it only success.”

What opportunities exist for mining in Azerbaijan?

As a result of the research carried out by the Ministry of Ecology and Natural Resources in the area of geological exploration and prospecting, a total of 163 deposits have been identified in 25 regions of the country. These include, among ore mineral resources, two copper, three gold and silver, four loose-gold deposits, as well as 47 deposits of non-ore mineral resources, 105 of building materials, and two of subsurface water.

How does the Ministry work to ensure that water pollution levels are kept to an acceptable standard?

A system of sophisticated environmental monitoring based on advanced international experience and the latest technology has been put in place. In order to accurately analyze and assess environmental components, fully equipped research laboratories have been set up in different regions of the Republic, including those on cross-border rivers. As part of a technical cooperation program with the International Atomic Energy Agency (IAEA), a system of automatic controls over radiation levels has been created. There are a total of 28 laboratories with the Ministry of Ecology and Natural Resources dealing with the research of environmental components. In order to provide the population with clean drinking water in accordance with the orders of the President “on measures to improve the provision of the population with environmentally clean drinking water,” water treatment plants have been installed in a total of 221 villages across 20 districts located along the Kura and Araz rivers. Around 400,000 residents of those villages were supplied with water meeting the requirements of the World Health Organization (WHO). In order to ensure the environmental protection of the Caspian Sea, “a system of the environmental protection of the Caspian Sea” has been developed for the first time in a Caspian littoral state. To this end, 17 biological modular treatment plants with a combined daily capacity of 6,400 cubic meters were installed in coastal areas. A pilot project is currently underway to establish a high-tech plant for the desalination of seawater and to create a modern seedling complex. A hazardous waste landfill has been created in order to ensure the effective management of hazardous waste. The approval of a program on the development of the hydrometeorology service in Azerbaijan by the President in 2004, and the measures taken to implement it, gave an impetus to the development of the hydrometeorology service in the country. According to an order by the President, in order to study climate change in the Bazarduzu-Shahdag-Tufandag area of the greater Caucasus, examine the dynamics of glaciers under the influence of climate change, and comprehensively study the ecosystem, an integrated hydrometeorology and environmental scientific research center was established. Automatic meteorological stations were installed on Mount Tufandag, and in Shahdag and Shahduzu, and their uninterrupted operation required the use of alternative energy.

What is your outlook for the future?

The country’s correct socioeconomic development policies have brought it only success. It is worthy to note that the ongoing environmental activities are implemented according to state programs and action plans approved by President Ilham Aliyev, and are based on the principles of sustainable development. As a result of the successful implementation of socioeconomic development policies, the environmental situation in the country will continue to improve and the effective use of natural resources will be ensured.