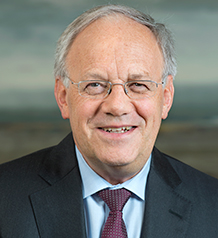 Johann N. Schneider-Ammann has been the President of the Swiss Confederation since January 2016. Prior to assuming the presidential office, he was the Vice-President of Switzerland from January 2015 to December 2015. Before taking over as Head of the Federal Department of Economic Affairs, Education and Research (EAER) on November 2010, Schneider-Ammann was a member of the National Council of the Free Democratic Party (FDP) for 11 years. He was born in 1952 and has a degree in electrical engineering from the ETH Zurich. Before becoming member of the Federal Council, he was President and Delegate of Ammann Group.

Share on:
TBY talks to Johann N. Schneider-Ammann, President of the Swiss Confederation, on the two countries' historic relationship, integrating Iran into the global financial network, and supporting regional stability.

What is your assessment on the historic relationship between Switzerland and Iran?

Switzerland has longstanding, friendly relations with Iran based on dialog on all matters of common concern and mutual respect. The existing friendship treaty between our countries dates back to more than 140 years and is a telling sign of the quality of our ties. Even during difficult times, Switzerland was always present in Iran. Our policy of dialog, the culture of listening, respect, and searching for common ground has created a relation of continuity and trust between our countries. Switzerland’s protecting power mandate for the US in Iran, which we have fulfilled since 1980, is equally based on this culture. In this same spirit, Switzerland has always supported a diplomatic solution regarding Iran’s nuclear program, both in substance and by hosting negotiations. We are proud that the adoption of the Joint Comprehensive Plan of Action (JCPOA) took place in Geneva and the general framework of the current agreement was concluded on April 2, 2015 in Lausanne. On a personal level, I had the honor and pleasure to experience and reaffirm this bond several times myself in meetings with representatives of the Islamic Republic of Iran. In February 2016, I was the first-ever Swiss President to visit Tehran, where I was welcomed with the famous Iranian hospitality and warmth by my counterpart, President Hassan Rouhani, as well as by the Supreme Leader, Seyyed Ali Khamenei.

Both countries have expressed willingness to boost cooperation. What are the potential areas of cooperation between Switzerland and Iran in this new era for the country?

Together with President Rouhani, we adopted a comprehensive road map covering 12 areas of cooperation. One important part of it deals with political consultations, including on regional security. We have also resumed our dialog on human rights issues and started consultations on legal and judicial matters, with a first round in Switzerland. Other areas include tourism, transportation, agriculture, and completing economic and financial dialog. In the field of science, research, and technology, I see high potential, as both of our countries have highly qualified people and host some renowned scientific institutions. Fostering direct cooperation between universities and scientific institutions proves to be a promising way forward. The activities since the conclusion of this cooperation program on February 27, 2016 have been impressive; we have welcomed several high-level delegations from different ministries and institutions in Switzerland, and many Swiss businesspeople and government representatives have visited Iran since then.

Seven months after the signing of the JCPOA, big European banks remain reluctant to handle Iranian payments. How can Switzerland help Iran return to the international banking system?

Switzerland welcomes the reintegration of Iran into the global financial system after the implementation of the JCPOA. As part of the roadmap to strengthen bilateral relations, it has thus established a financial dialog with Iran. Within the scope of this dialog, Switzerland supports Iran in its efforts to implement international standards, such as in the area of anti-money laundering and banking regulation, and engages on challenges remaining for payments, transactions, and trade financing in Iran.

What is your opinion on the stabilizing role Iran can play in the Middle East and its bilateral relations with neighboring countries?

Iran is a key player in the region. A rapprochement between Tehran and Riyadh would obviously help stabilize the region. In view of the good relations that Switzerland maintains with both countries, we are committed to supporting this process. Iran has already demonstrated its positive influence in the region by promoting the need for a trilateral humanitarian dialog format with Syria and Switzerland. So far, several rounds have been held with the objective of improving humanitarian assistance for all Syrians in need. This dialog is complementary to and reinforces ongoing dialogs by other humanitarian actors on the ground.