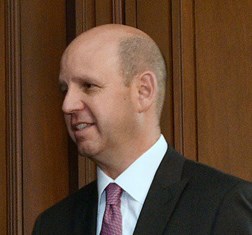 Juan Claudio Morales held the title of Ambassador of Colombia in Panama from 2018-2019. He was formerly General Director of the Protocol of the Ministry of Foreign Affairs from 2011-2017 and Counselor of the Permanent Mission of Colombia to the OAS from 2007-2011. He was also previously Second Secretary of the Permanent Delegation of Colombia to UNESCO and Private Secretary Office of the Minister of Foreign Affairs, among other postings.

Share on:
Given Panama's importance to the region, Colombia is ready to capitalize on opportunities for investment and trade.

How can Panama integrate the Caribbean and Central America with the rest of the continent?

Panama clearly knows how to do this. Panama became the hub or bridge of the Americas a long time ago as a result of its location and integration with Latin America. If someone asks a Panamanian if he considers himself South American or Central American his answer will be both, because he is in the middle and connects both. What helps the most in this role is connectivity with the Caribbean, South America, and Central America. Everything that goes through Panama can go to those regions, including connectivity and logistics.

What role can Colombia have in the development of the Panamanian economy?

It is an important role, since 17% of the investment in Panama is Colombian. Investment from the US comprise 22%. What directs our investment in the medium term is banking. In fact, 30% of Panamanian banks belong to Colombia, including Banitsmo, Bancolombia, Bac, Grupo Aval, and Davivienda. From there, we expanded to Central America. In addition, there are some large companies, such as the Nutresa Group and Grupo Argos, among other. Another important issue is the orange economy: platforms, software, the whole subject of creative innovation in music platforms, advertising, video, banking software. Another sector is tourism, as we are discussing the idea of bringing Panamanian tourists to Colombia. For connectivity, we have flights to all cities every day. We also want to continue growing in the flower market. The Netherlands is our strongest competition, but it is far away. Here the market is ours. These are the sectors we are targeting.

Which sectors in Panama offer the greatest opportunities for investment and trade for Colombia?

We are focused on construction materials. One sees the last 12 years of growth in the construction market. We have identified materials such as windows, gutters, and doors, all of which is brought to Colombia. We will compete with Chinese imports as well. On top of this, we are competing in energy distribution. We will enter strongly into the energy sector, especially through the tender for the fourth distribution line. We competed with Spain, Italy, South Korea, and France for the tender. The last two left were China and the Colombia.

Besides electrical distribution, which other sectors could be competing with other Latin American countries thanks to that relationship with Panama?

We want to be part of South Pacific cruise lines. There is a line that is extending from Valparaiso, it would go up to Guayaquil, and from Guayaquil we want it to pass through Colombia, through Buenaventura and Nuqui, and arrive here in Panama. We want to create South Pacific cruises that do not exist yet. We want to build a cruise terminal in Buena Aventura and capture a bit of the tourism that comes down from these cruises, so that they can get to Calima, Cali, and then go to the south. We will either compete or partner with Chile and Ecuador.

With the new administration, what is your prediction for the future or potential collaborations in the relations of Colombia and Panama?

We started to invest here more heavily after Venezuela collapsed. Venezuela was our second-largest commercial partner, so we had not been looking at other options or candidates for its replacement. After the crisis in Venezuela, we realized we could start investing in Panama. There are already established Colombian companies here, and it is the country that is growing the most. It is important to diversify and expand to new markets. For us, Panama is important. In less than a year, Colombian President Iván Duque has come to Panama three times. Not only is it important in commercial terms, but also in terms of geopolitics, security, migration, and stopping drug trafficking. We are allies. We always cooperate, and we work with the Americans.