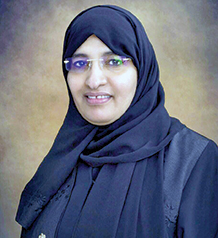 In addition to serving as the Chairperson of the ninth Sharjah Consultative Council, Khawla Abdul Rahman Al Mulla is also the CEO of the Family Development Centres. Previously, she was the director of the Family Guidance Centre and the Girls Affairs Department. She was the Deputy Chairperson of the Directorate General of Children and Girls Centres. She has a background in education, serving as CEO of Al Ghad Schools and principal of several schools. She holds a bachelor’s in business administration and economy, and a master’s of applied sociology, specializing in family guidance and social activities.

How can Sharjah Consultative Council’s processes be an example for the other emirates?

The council recently received an ISO; what is the significance of this achievement?

This is the first time that a parliament has won an ISO, which demonstrates that this is an organization that has excellence in its people and wants to be as efficient and transparent as any corporation. This ISO is important because it shows that we follow processes and work systematically, without which the parliament would not be able to deliver its message and vision. Another reason why having an ISO is important is because all the procedures are documented. This is key to be able to leave a documented legacy for the ones that come after us. I am leading the team now, but once I leave, they will be able to show and guide the next chairman on how to lead the parliament.

How can the Consultative Council ensure that foreign investment in the Emirate translates into maximum benefits for the people of Sharjah?

When you want to invest in a place, you look for security. When you have security and a ruler who has a system in which he listens to everyone in the country you will be able to attract FDI. Having the Consultative Council assures people coming from outside that there is justice, that there is security and that there is equality. We represent His Highness the Ruler of Sharjah, who is a very educated individual and a person with a vision. Having such a person at the helm emphasizes the sustainability of the system. Whenever we have a dialogue with government entities, we make sure that His Highness’s vision is communicated. We practice our role, as legislators and as supervisors, and we ask questions to make sure that all the government institutions follow the instructions and pursue the right investment. Besides following up on the performance and level of service provided to the public, our role as a parliament is to focus on the budget in terms of how much is spent, where it is spent, and what is the ROI. We are always open to suggestions and ideas from the public, we filter them, and we send them to His Highness. If he finds them important, he sends it back to the government to be implemented.

The Best of Times