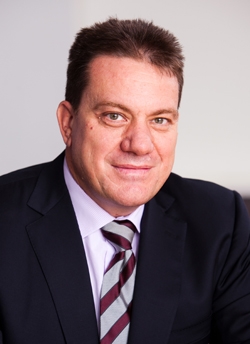 Brad Gordon was appointed as ABG’s CEO in August 2013. He was previously the CEO of Intrepid Mines, a Canadian- and Australian-listed precious metals exploration and development company with primary operations in Indonesia. Prior to his time at Intrepid, he was the CEO of Emperor Mines, the Australasian subsidiary of DRDGold before it merged with Intrepid. Before that, he held a series of progressively senior positions with Placer Dome. He holds a Mining Engineering degree from the Western Australia School of Mines and an Executive MBA from INSEAD, France.

How is African Barrick Gold (ABG) working to increase the level of local content?

When I joined we had an office in Johannesburg, with a staff of over 200 people. We are relocating all but 25 to Dar es Salaam to new premises. Those roles have been given to Tanzanians. Even at our mines we are reducing the number of expatriates, from over 500 to about 300 over the past few months, and that number will continue decline.

How has your experience in Tanzania helped you in your expansion plans for other countries in the region?

ABG is the largest private employer in the country and the largest power contributor in the country. We are also the largest taxpayer. We have been here now for nearly 15 years and were one of the first companies to establish a foothold here when the mining industry was opened to private enterprise. We have done well out of it, and so has Tanzania as a result of our presence. Tanzania will always be our hub, although we do have an active exploration program in Kenya. One day that may become a second operating country if it develops into a mine. We are looking at opportunities in West Africa as well. We hope to be a significant player on the African continent, with Tanzania being the center of gravity.

Can you elaborate on ABG’s plans regarding exploration?

Most of our opportunities in Tanzania are immediately around our three mines. We did have a very large land bank in Tanzania. We have now relinquished about 80% of that so that it can pass on to the next generation of miners. There are several junior explorers that have entered the country to start reworking that ground. That in itself creates a new economy in mining and exploration.

How would you assess the current regulatory framework for the mining sector in Tanzania?

Foreign investors like us crave fiscal stability. A lot of our time is spent talking to senior government figures on why our original mining development agreements should be honored. They have largely been honored, which has been welcome. When you think about the challenges we face in Tanzania, the top three in business terms are really VAT refunds, power, and law and order. Having said that, we are making true progress on the VAT refunds issue. At one stage we had over $100 million outstanding, but that number continues to decline significantly. We are always talking to the government about how we can manage that number. So that has been a good outcome for us. The second major impact on our business is the unreliability of power. We are the largest power consumer in the country, but for our operations we have had to install backup power facilities at each of our three mines so that when the TANESCO supply is interrupted we can continue to run the mines without production loss. Ultimately, we would prefer to rely solely on TANESCO power, but that has not always been possible. That is an issue that we continue to work with TANESCO on, and its management has been responsive in recent times. There is a solution. but it is not a quick one. That is another issue that will resolve itself over the next two or three years, particularly with all the new power projects coming into the country. At some stage we will benefit from the new gas projects. Then possibly, the third major issue in terms of impact on our business is law and order. We do suffer from illegal mining within our mining boundaries at North Mara, which is well documented. We continue to work with the government to try to get on top of that challenge. The response is not a security response; it is a community and a governmental response.

What brownfield projects are you focusing on in the near term?

The company has been losing money for some time, but we are happy to acknowledge that we are starting to make money today even with the prevailing low gold prices. We have dropped our cost base by more than one-third over the last 12 months. The first focus for us is to fix the three mines. The second stage is to look at how can improve the production coming out of them and to look at other resources we can mine at each of those three locations. We are doing quite a bit of drilling in and around the mines and deeper below the mines. At North Mara, for instance, we think we will be going underground for the first time next year from operating an open mine. And Bulyanhulu is a world-class deposit with nearly 20 million ounces running at nearly 10 grams per ton. Based upon today’s numbers that will suffice for another 30 or 40 years. With the additional drilling we are doing on reef one and reef two we expect that that will be 50 years plus, so that is a fantastic asset. I am glad it is ours and not someone else’s.

Last year we produced 640,000 ounces. In 2014 we are aiming for between 640,000 and 690,000 ounces. Next year will be significantly higher than that, mainly driven by the improvement at Bulyanhulu. We are aiming to almost double the overall production level from that underground mine. That will be a significant achievement. I look forward to registering an annualized run rate of 350,000 ounces at Bulyanhulu by the end of 2015.

The Ministry of Mining has a vision of the mining sector accounting for 10% of GDP in Tanzania. When and how can this be achieved?

Geologically, there is the potential to reach those kinds of targets. I think last year the figure was close to 4% of GDP, and we provided the lion’s share of that 4%. There is some growth within our business by itself, but there is definitely potential for others to come in and help to grow the industry in Tanzania. Metal prices will determine just how quickly that increase occurs. The industry has been through an interesting phase. Metal prices have come off significantly after the China boom. China is still doing extremely well for itself, but prices have come off a lot in the last few years. Quite a few managers in this industry have not been exposed to the conditions that exist today. I think there are some real opportunities for companies like ours to differentiate themselves in the industry. I would certainly like to see ABG become the preferred mining company in Africa. I would like us to approach the industry in quite a different manner in terms of how we market ourselves, our relations with the government and the community, and how we develop our people. I am quite serious about changing that whole game in the industry, because the industry has such a bad reputation from the past. It is not too difficult to change that in my opinion. We would like to change the game. We want to make be profitable, but having said that we also want to take a leadership role in how the industry relates to Africa.