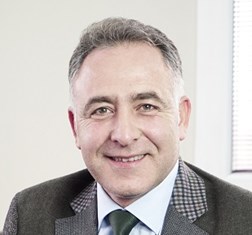 Orhan Gülcek is the chairman of Cemre Shipyard. He founded Cemre Engineering in 1996, a company that initially specialized in the painting of ships. Since 2005, Cemre has been building ships, and has since become most known for its shipbuilding capabilities. He is a member of the Turkish Chamber of Shipping and the Istanbul Chamber of Commerce, serves as a board member for the Turkish Shipbuilders’ Association (GISBIR) and the Yalova-Altinova Shipyard Entrepreneurs Industry and Trade Inc. Co, and is the vice chairman of Yalova Pilotage Inc. Co. He has an electrical engineering degree from Yıldız Technical University.

Share on:
“We recently got a Facility Security Document, so we plan to work on military projects for foreign countries.“

Cemre recently delivered its 50th vessel to Havyard Group, a Norwegian shipping company. Why did Cemre begin working with northern European companies, and what future plans do you have with them?

We started to work with Havyard in 2005 when northern European countries showed their interest in Turkey for shipbuilding. We rented a place at Istanbul Shipyard from the Ministry of Defense and started looking for clients. When we came into contact with Havyard, a Norwegian company, all the Turkish shipyards were working at full capacity. We won our initial contract with Havyard because we had capacity, but we won followup work because of our performance. Later, we continued to work with them because we provided them with high-quality ships, delivered on time due to our entire team’s hard work. We have delivered Havyard 50 ships so far and are working on 10 more ships, hopefully with more to come. This partnership has a win-win model and is based on mutual trust. We think it will strengthen and grow in the future.

Other than Norway, which European countries are you most interested in?

We consider Europe as one block, so it is not wise to look at a single country from a business development standpoint. We prefer to construct project or niche ships, such as the ships we construct for the energy sector that service offshore windmills. These ships are often used by more than one country and are extremely versatile. We have constructed ships for Norway, Denmark, Iceland, United Kingdom, and France. The most popular ships of late are fishing vessels, ferries, and energy-support ships.

Why did the company choose to focus on niche sectors of the shipbuilding industry?

Turkey’s construction of classical ships has decreased substantially because of competition from the Far East. We have focused on project ships based on our client’s needs, or on a tailor-made basis. One of our goals is to construct cruise ships and to grow our presence in that area. We see great growth potential for ships that use advanced technologies, such as hybrid power. There is growing demand for hybrid and battery-powered ships because the environmental factor is gaining prominence, especially in northern European countries. Hydrogen-powered ships are also being designed and people are beginning to realize the future of autonomous ships. We have to follow the technology. We have to target the ships that involve technology and demand more engineering contribution.

What benefits do hybrid vessels offer, and do those benefits justify the higher cost?

We have different technologies for our hybrid solutions. The key benefits are fuel efficiency, silent working ability, and environmental impact. So far, we have built hybrid ships primarily for ferry companies. Eventually, I believe all ferries will use electrical hybrid solutions, especially in Norway. Regarding cost, hybrid technologies will become cheaper in the future. For example, the batteries were expensive last year but now their prices are dropping. With time, all of the associated costs will be more balanced. When it comes to the market for the first time, the prices are higher because of the R&D costs.

How has the Turkish Lira’s depreciation impacted your input costs and export demand?

For us, the Turkish Lira’s sudden depreciation or appreciation is a disadvantage. Although we export and an increase in the value of foreign currency may seem to benefit us, it’s not the case. Around 60-70% of our costs depends on foreign currency. When our suppliers accept the foreign currency exchange rate and calculates costs accordingly, pulling the prices back is extremely hard. On the contrary, stable and small increases are better for us as that helps us plan ahead.

With Cemre’s pipeline full for the next two years, what investments are you planning to expand your capacity?

We have always invested to expand our shipyard capacity; each year we grow by 10,000sqm. We started ship construction in 2005 with a really small area and in 2007 we had our own 20,000-sqm shipyard. The first shipyard we had has grown to 70,000sqm. After expanding it yearly for a few years, we decided to to purchase a larger plot of land. At present, we have two 70,000-sqm shipyards and a 10,000-sqm piece of land; however, according to our production plans, we need more space. There are 37 other shipyards in Yalova and we plan to outsource some of our jobs to then. We want to invest more on the technology, because the ships we construct are special ships and we want to construct these ships as quickly as possible with the best technology available.

In the future, how do you envision Cemre further diversifying its shipbuilding capabilities?

We recently got a Facility Security Document, so we plan to work on military projects for foreign countries. Another alternative is that we want to construct small-sized passenger ships, especially because passenger ships are also sensitive to the environment and use hybrid technologies. With the advancement of technology, new routes are formed, which boosts demand for new ships.