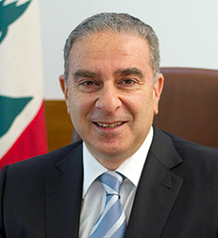 Opportunities in the Challenges

Michel Pharaon was born in Beirut. He received his degree in economics from St. Joseph University in 1980, followed by an MBA from the University of Paris in 1981. As well as being a Member of Parliament, formerly as Minister of Tourism and now as Minister of State for Planning Affairs, he heads the Board of Directors for Mednet Insurance Company and Commerce du Levant Magazine. He is Deputy President of Ruphayil Pharaon and Sons and Pharaon Holding.

Share on:
What have been your main focuses over the past year? Planning involves many sectors of the economy, but as there was no structure for this new ministry the first thing […]

What have been your main focuses over the past year?

Planning involves many sectors of the economy, but as there was no structure for this new ministry the first thing was to study what kind of structure should be in place and how and which functions we should cater to. In general, there is a great need for planning in Lebanon. The Council for Development and Reconstruction (CDR) is catering to part of this need, and some other planning is conducted through other ministries. But there is no political link between these planning activities, except partly through the president of the Council of Ministers. Now, we have designed a proposal to start our operations that will be presented to the Council of Ministers. The spectrum of potential operations for the ministry is large and goes from choosing some specific areas for our planning activities through to possibly creating a High Council for Planning. This would bring together all the existing planning elements and involve deciding which parts to develop further. As there is no budget, this has also been discussed with some world funds and embassies that are willing to fund specific areas. Whether to have a full Ministry of Planning again as we had in the 1970s will be a political decision in the long run.

Is the Ministry of State for Planning Affairs looking to form partnerships with the private sector?

There is no choice anymore in our developed world; the creation of public-private partnerships helps in the financing of some big projects and in terms of efficiency. Now, the private sector’s tools are becoming more developed, and today it has access to long-term funding, which gives more flexible tools to the public and private sectors to create synergies that are important in our terms. It is important in fields such as the development of electricity resources, telecommunications, water, sewerage, ports, and even some roads. Even when talking about productive sectors like industry and industrial free zones, partnerships are important. The same is the case in the MICE sector. The private sector in Lebanon is developed and has a great deal of know-how or access to know-how. Lebanese business people have open links to the Middle East, Europe, North America, and Latin America, together with easy access and connectivity worldwide through technology, and wide-reaching connections globally through the Lebanese diaspora.

Lebanon’s economy is predicted to grow by 2.5% in 2017. What are your prospects for the country’s economy for 2017 and the medium term?

Lebanon has opportunities and challenges. The private sector and civil society is very active here. At the same time, in order to activate the economy, you need investments and for that you need political stability. In Lebanon, there is always a need for stability and security. We have had this for three years, which is a significant improvement in Lebanon. There are investments opportunities here, and there will be some decisions made about investing here now that the election of the president is done. It will be easier following the election of the president and the relative political stability as a result of that election. At the same time, there are challenges, such as the refugee problem, which is an important factor for considering economic growth and development. If we measure growth based on the increased population it is negative because of the influx of refugees. This inflow creates stress on the health and social infrastructure of the country and even on electricity and some services. Simultaneously, increased demand creates opportunities further development and new businesses. Opportunities and challenges are two sides of the same coin.