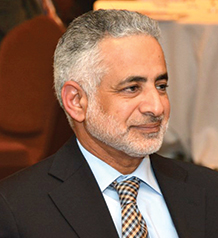 Hamed Al Hammami has a PhD in Educational Policies and Management from Brigham University, UK, and a Master’s in Teaching English as a Second Language from Ohio State University, USA. He joined UNESCO in 2004 as a Director for the Doha Cluster Office, and UNESCO Representative for the Gulf States and Yemen, and was appointed as Director for UNESCO Regional Bureau for Education in the Arab States in Beirut and UNESCO Representative for Lebanon and Syria in February 2012. He worked as Director for the Technical Office of Studies and Development at the Ministry of Higher Education (Oman), and a Director General for Curriculum and Training at the Ministry of Education (Oman) 1999-2004. He was a member of the Omani Education Council and worked as an Educational consultant for the Gulf States and international organizations.

Share on:
TBY talks to Hamed Al Hammami, Director of UNESCO's Beirut Office, on their projects in the fields of culture, education, human rights, freedom of expression, and youth in governance across their regional mandate of Lebanon, Syria, Jordan, Iraq, and the Palestinian Territories.

What are UNESCO Beirut Office’s main areas of action as a regional bureau?

In the field of education, with the emerging challenges brought about by instability and armed conflicts confronting the region, promoting and sustaining equitable and inclusive education is at the heart of what UNESCO does in the Arab region. As such, UNESCO invests considerable financial and human resources to support Arab Member States to realize their national education development aspirations, particularly in countries affected, directly and indirectly, by conflicts. Safeguarding cultural heritage particularly in Syria is another priority for UNESCO. At the same time, UNESCO works on promoting science for the benefit of society in the Arab region. Social and ethical dimensions are also central to UNESCO, as it strives to reach out to the most vulnerable segments of society and to contribute to peace, human rights, and poverty eradication through a human rights-based approach in all its fields. At the regional level, UNESCO is implementing programs and activities focusing on advocacy and sensitization on gender equality and promoting gender mainstreaming. UNESCO also is the only UN agency with a specific mandate to protect freedom of expression and information. The Communication and Information Sector’s program at UNESCO in places emphasis on freedom of expression, unbound access to information, safety of journalists in the Middle East, and media awareness among the youth. The Middle East is notably one of the most dangerous regions in the world for journalists. As instability arises and persists throughout the Arab States, the region becomes increasingly risky for journalists, reporters, and media personnel. Finally, as youth in the Arab States are calling for more decisive roles in legislation and in the government process, UNESCO has responded by creating events to promote a greater involvement for youth in planning and decision making.

What are the main highlights of the recent agreement UNESCO Beirut Office signed with The Council for Development and Reconstruction (CDR)?

UNESCO and CDR have signed an agreement (UDAS) to assist the government by providing advisory services and high-level technical assistance to the Ministry of Culture/Directorate General of Antiquities, with respect to the two World Heritage sites of Tyre and Baalbek in Lebanon. Implemented by international and national specialists with extensive experience in Cultural Resource Management and Preservation, UNESCO will monitor the project design and execution CDR’s Cultural Heritage and Urban Development (CHUD) project. For this purpose, the CDR, the DGA, and the Italian Cooperation Development Office have coordinated their action together with UNESCO for launching the UNESCO Documentation & Advisory Services (UDAS) project. The UDAS aims to help the DGA in organizing high level technical workshops dedicated to the works in both the Baalbek and Tyre archaeological world heritage sites. These workshops will monitor the execution of works respecting the sites’ outstanding universal values, their integrity and authenticity, in respect with international standards of practice.

What are UNESCO Beirut Office’s main priorities for the years to come?

The priority of the UNESCO Office in the next 15 years is to support Arab Member States to progress towards achieving the global goal, of “Ensuring equitable and inclusive education for all and promoting lifelong learning opportunities for all,” though UNESCO’s areas of expertise, in partnership with the UN family and all the partners. Our second priority is to respond to the many political and societal upheavals and transformations the Arab world has undergone in the past 15 years. It may safely be said that almost no country in the region has gone untouched or been unaffected by one crisis/conflict or another. Therefore, UNESCO will do its utmost to contribute to the resilience building of national governments and their citizens through contextually relevant, rights-based multi-sectoral program.

Welcome to
Welcome to WPBot
×