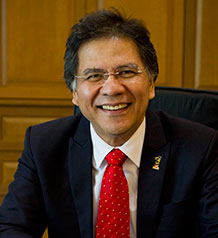 Dato’ Sri Idris Jala was recently featured in Bloomberg Markets’ 50 Most Influential List of individuals who have moved markets or shaped ideas and policies. He was a Member of the World Economic Forum’s Global Agenda Council on New Growth Models and the World Bank’s Panel of Advisory Experts for Competitive Industries practice division. He was also a Minister in Prime Minister’s Office and is currently the CEO of the Performance Management and Delivery Unit (PEMANDU) and Managing Director of BFR Institute. PEMANDU is a unit that oversees the Malaysia’s National Transformation Programme. Previously, Jala spent an illustrious 23 years working for Shell in various capacities, based in Malaysia, the UK, the Netherlands, and Sri Lanka. He led a successful turnaround when he was the CEO of Malaysia Airlines. During the time, he was also a Board member of the International Air Transport Association (IATA).

Share on:
"In my personal opinion, Tanzania's latent wealth may be one of the highest around."

You have argued on the “six secrets of transformational leadership,” reflecting on your experience in Malaysia since 2009. Could you elaborate on these, and how would you translate these into practice for the Tanzanian case?

First let us agree that it is not my job to translate this into practice in Tanzania. In 2012, I took it upon myself to share the 6 Secrets with President Kikwete, and that gentlemen took ownership of transforming their practices. The Kikwete administration had already decided to play the Game of The Impossible (Secret #1) even before we showed up. Tanzanian Development Vision (TDV) 2025 was created to transform the economy to middle income status by 2025. It is a highly ambitious goal in view of their current milieu. In making the TDV2025 declaration, they also determined their True North (Secret #2), which was GNI, just like Malaysia. Per the WB Atlas method, GNI should exceed USD1,036 per capita to qualify as lower-middle income.
The Discipline of Action (Secret #3) was perhaps lacking in the beginning because civil servants were used to long periods of inactivity because of a mix of reasons bureaucratic or resource driven. President Kikwete created the Big Results Now (BRN) system and established the President’s Delivery Bureau (PDB) to assist the civil service to generate and maintain momentum by utilizing the convening power of the Presidency to get this moving. In the BRN system, ownership of monitoring and problem solving was assigned to several lead ministers who were held accountable through their public pledges to deliver, and also by the internal governance system. This thereby demonstrated Situational Leadership (Secret #4). Most significantly, and particular in the African context where distrust between the public and private sector is endemic, the Kikwete Administration conducted cabinet workshops that enabled the entire cabinet to jointly identify key focus areas; and following that, they conducted labs to enable the entire stakeholder base (government, private sector, development partners, etc.) to jointly create detailed implementation plans to hit the targets set for the aforementioned focus sectors. This was a great demonstration of the Winning Coalition (Secret #5) coming together to solve a national problem. Secret #6, acknowledging Murphy’s Law and preparing oneself to attract divine intervention to enable progress is manifested in the establishment of the implementation framework where progress is constantly monitored so contingency plans can be prepared, external parties, e.g. PEMANDU, development partners, the International Review Panel, are all engaged to provide the “view from the outside” to assist Tanzanian decision making. I would say the Tanzanian administration under President Kikwete had done a good job reflecting the 6 Secrets in how they set their program up. And I fully expect the current President John Magufuli to further put his personal stamp on the system.

You have an operation in Tanzania, emulating the work and success of PEMANDU in Malaysia. What are the key common factors and differences between the implementation of a transformation agenda between Tanzania and Malaysia?

The TDV2025 program is entirely owned by the Tanzanian government, and we have seconded a team of Malaysians to work with them, at their request, to supplement their human capital base. Perhaps this is the first difference between the Malaysian and Tanzanian situation: we have assembled a team from diverse backgrounds from the private and public sectors, and they have been doing this since the GTP began in 2009. The Tanzanians have not had a chance to build that depth. The other difference between our programs is the area of program funding (and the resultant structures to support it). Tanzania is quite dependent on the largesse of foreign development partners with its overseas development aid (ODA). Its systems and structures are geared very much toward this model; Malaysia is quite free from this constraint. Malaysia managed to mobilize private capital for infrastructure development, and we also have systems in place and extensive/expensive experience here. In Tanzania, the ability and readiness of the public and private sectors to work together in the national interest is not really there in any meaningful fashion. However, there is a growing willingness to embark on PPP initiatives to enable government funds to be freed up for social sectors. Malaysia will also help Tanzania to develop this crucial expertise. With that said, I believe Malaysia and Tanzania have much more in common than we have differences. In my numerous interactions, I found its senior leaders and civil servants to be well educated and credible—they have perhaps lacked the resources to fully demonstrate their abilities. Their top leadership from President Kikwete then, and to President Magufuli now, are highly focused on delivery; and that is a key commonality with Prime Minister Najib.

Could you tell us more about your cooperation with the Tanzanian government and the World Bank on your projects here?

Since 2012 we have supported the government of Tanzania, using our BFR methodology, to translate its Tanzanian Development Vision 2025 from high level-vision statements into granular, implementable programs. Our cooperation is a government-to-government program initiated by former President Kikwete after he observed Malaysia’s National Transformation Program (NTP) in action during his visit to Kuala Lumpur in September 2011. The Malaysian government agreed to provide the human resources over a period of five years to assist in the development of their own systems and human capital. However, the funds to compensate the government of Malaysia for the expenses incurred were provided to the government of Tanzania by the UK’s Department for International Development (DFID), USAID, the World Bank, and the Swedish government. PEMANDU does not work directly with any of these agencies. We support the government of Tanzania solely. The interests of these various agencies may be reflected in some aspects of TDV2025, but we view those as Tanzanian priorities, and not of the World Bank or any other development partner. Ownership of programs must also be, and be seen to be, vested in the local government to the civil servants will develop their capabilities as they execute their solutions.

In your opinion, what are the key strengths of the Tanzanian economy, and how what needs to be done to unlock the full potential?

In my personal opinion, Tanzania’s latent wealth may be one of the highest around. It is incredibly rich in mineral resources, including now newly proven natural gas fields. It has not hitherto benefited from domestic value addition of these mineral resources, but that is something that is bound to change. The country is strategically located as a logistics hub because of its many seaports, which are able to serve their landlocked neighbors. Their tourism resources are hugely underexploited due to poor connectivity and lack of proper marketing. Did you know that Mount Kilimanjaro is in Tanzania? Did you know that the Serengeti National Park in Tanzania in many times larger than Kenya’s Masai-Mara, but only has a fraction of Kenya’s hotel rooms and air connections? Did you know that Tanzania produced a surplus of maize, for example, but hasn’t been able to fully monetize it due to the lack of downstream agricultural infrastructure? Tanzania has large swathes of arable land and a large labor force that has not been fully tapped. When concrete and determined actions are taken by the government to address these deficiencies, the economy will take off.

How do you envision Tanzanian-Malaysia relations evolving over time? Where do you see room for increased economic activity between the two nations?

You will notice that the examples I shared of Tanzania’s potential wealth—minerals, agriculture, tourism, and so on—were all the same sectors that provided the initial kick for Malaysia’s own economic development. Our stories have the same beginning. It should follow that the next chapters will also be similar if we share our transitional experiences and they pick them up. Therefore, I foresee Malaysia and Tanzania continuing to leverage on each other in a win-win partnership through their journey from a low income, commodities-based economy to a middle-income, manufacturing-based economy. The key to unlocking this potential will be for Tanzania to be able to clearly communicate its focus and priorities to assist the business community to assess risk vs. potential in a transparent manner.