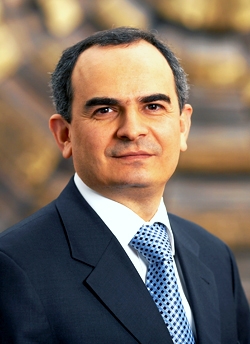 Governor, Central Bank of the Republic of Turkey

Born in 1966, Erdem Başçı obtained his PhD in Economics from Bilkent University in 1995, and between 1995 and 2003 worked as an assistant professor. He also lectured at the University of York as an honorary visiting fellow in 1999, and his academic papers have been published in the Oxford Economic Papers, the Journal of Banking and Finance, the Journal of Economic Dynamics and Control, and the Journal of Mathematical Economics. Having served as Deputy Governor of the Central Bank of the Republic of Turkey since October 9, 2003, he was appointed Governor on April 19, 2011.

Share on:
"The Turkish economy has been one of the top performers during the recovery period after the Lehman crisis."

What steps is the Central Bank of the Republic of Turkey (CBRT) taking to ensure that Turkey meets its 5% target for inflation in 2013?

Expectations, credit, and currency are three key variables that determine price inflation. Inflation expectations are close to above our medium-term target of 5%. Measures to curb excessively rapid credit growth will be instrumental in containing any inflationary pressures in the coming months. These measures are mostly macroprudential in nature since rate hikes would be counterproductive in the global low-interest rate environment.

To what extent is a structural reduction in the current account deficit (CAD) a priority for Turkey, and how can the country achieve its target for the CAD to GDP ratio in 2013?

In 2012, the CBRT, jointly with other agencies responsible for financial stability, was able to attain more balanced domestic credit growth. This was instrumental in bringing the CAD from $75.1 billion at the end of 2011 to $47.5 billion at the end of 2012. The 2013 CAD forecast in the Medium Term Program (MTP) of the government is 7.1% of GDP. Structural measures listed in the MTP to boost savings and energy supply are expected to improve the outlook on the external balance, once they are implemented.

Turkey’s GDP growth has seen a sharp drop from its 2011 high. What steps is the CBRT taking to help the country to meet its GDP growth target in 2013 and achieve a sustainable growth trend?

Price stability, financial stability, and productivity are the three essential factors that determine the growth potential of a country. The Central Bank Law, which was amended in 2001, charges the Bank with taking the necessary measures to contribute to financial stability besides its primary mandate of achieving and maintaining price stability. The CBRT will continue to support balanced growth mainly via these two channels.

“The Turkish economy has been one of the top performers during the recovery period after the Lehman crisis.”

What are the CBRT’s monetary policy priorities looking forward?

Although global risk perceptions have improved considerably as a result of the ongoing monetary expansion in advanced economies, there is still an elevated level of volatility in capital flows to emerging markets. This condition necessitates a combination of flexible monetary policy and automatic stabilizers.

How would you characterize the medium-term outlook for the Turkish economy?

The Turkish economy has been one of the top performers during the recovery period after the Lehman crisis. Meanwhile, employment has continued to grow rapidly and unemployment rates decreased to levels lower than pre-crisis times despite a significant rise in labor market participation rates. Moreover, the rebalancing between domestic and external demand was achieved to a large extent in 2012. Therefore, the Turkish economy is now closer to a sustainable and balanced growth path thanks to prudent macroeconomic policies and solid macroeconomic foundations.

You were selected as the Central Bank Governor of the Year 2013 for Europe by The Banker in recognition of your apt management of foreign inflows. To what extent will this remain a policy priority in 2013?

Monetary expansion in the developed economies has been the main factor behind the rising volatility of capital flows. Volatile capital flows pose a significant challenge for emerging market policymakers. As a result, some emerging markets have resorted to capital flow measures in order to deal with the adverse consequences of capital flow volatility. In contrast, Turkey has been using a mix of macroprudential measures along with a relatively low and yet quite flexible interest rate policy in the face of volatile short-term capital flows. The policies in place curbed the excessively rapid domestic credit growth, avoided the excessive swings in currency, and thereby rebalanced foreign and domestic demand.