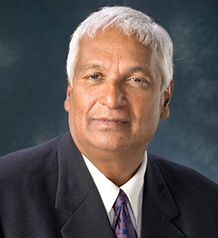 Winston Dookeran is a politician and economist. He is the current Minister of Foreign Affairs for Trinidad and Tobago. Previous positions have included Governor of the Central Bank of Trinidad and Tobago from 1997 until 2002. He is also a scholar of economics, beginning his career at the University of the West Indies, teaching economics for 15 years. He also became a Visiting Scholar at the Centre for International Affairs at Harvard University and developed ties to universities in the UK and Canada.

Share on:
TBY talks to Winston Dookeran, Minister of Foreign Affairs of Trinidad and Tobago, on relations with Latin America and Ecuador.

How do you assess Trinidad and Tobago’s role in global democracy and what steps are being taken to move forward in the international scene?

Trinidad and Tobago is at a pivotal point, both globally and hemispherically. Our visitors like the Vice President of the US, the President of the People’s Republic of China, and Japan’s Prime Minister are evidence of this. In terms of global diplomacy, we have always operated according to certain fundamental principles, and been anchored in human rights, peace, security, and democracy. We have attempted to mediate in global affairs wherever we are present and, in that sense, have earned the respect of the global community as a country that takes its position on the basis of fundamental principles that are rooted in international relations. We are also proactive in global issues such as the Arms Trade Treaty.

How do you assess the air traffic links between Trinidad and Tobago and Latin America?

I traveled to the Dominican Republic and met with the Foreign Minister to discuss connectivity and how we can partner with Avianca and Caribbean Airlines. Those talks have to be followed up with technical discussions for prospects and possibilities. There was a definite interest expressed by Avianca to consider this option for more direct flights to Trinidad and Tobago and the Caribbean. Meanwhile, the aviation agreement we are working on is being finalized. Air transport follows trade and the movement of people. It is expected that as trade and travel increase, so too, will air transport financing is expected improve. The Latin American countries have brought this issue to the agenda, and now the commercial and logistics are being worked on. I anticipate that over the next decade this will become a possibility.

Trinidad and Tobago and Ecuador have long enjoyed positive diplomatic relations. What issues have been strengthened over the past few years between both nations?

We are very mindful of Ecuador’s leading role in UNASUR and the way they have been able to provide leadership in UNASUR. We are not a member, but are constantly apprised of that role. Our relationship to UNASUR and Ecuador is really co-terminus. They are involved in other bodies, but we see them as critical in this respect. They are also an oil-producing country and a commercial relationship exists as well as technical exchanges. This is a natural area of cooperation.

The global economy is rapidly changing and there are oil cycles with respect to prices. The idea of jointly pursuing exploration opportunities is something that could be placed on the agenda as we both have expertise in this regard, and in that sense, our firms are also interested in partnering Latin America in this area.

What is your outlook for the Trinidad and Tobago economy for 2015 and beyond?

Three areas of diversification have been successful in Trinidad, one of which concerns energy itself. We have been able to shift from a monoculture petroleum production economy to one that produces gas, petroleum, petrochemicals, and a number of byproducts. We have also been able to extend the scope of our financial sector, which is now highly diversified and robust, operating in the entire region. The services sector is the third area undergoing diversification. While nascent, it is where we intend to focus in terms of diversification, which includes tourism, financial, and IT services—success there has still to be seen.