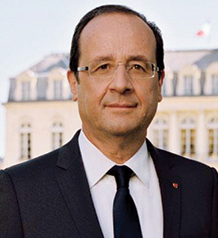 François Hollande joined the Socialist Party in 1979, becoming First Secretary from 1997 to 2008. Other prominent positions have included Mayor of Tulle from 2001 to 2008, deputy for Corrí¨ze from 1988 to 1993 and from 1997 to 2012, and Chairman of the General Council of Corrí¨ze from 2008 to 2012. Hollande graduated from HEC Paris and the Institute of Political Studies in Paris, and is an alumnus of the Ecole Nationale d’Administration (ENA). As an academic, Hollande held a tenure as professor of economics at the Institute of Political Studies in Paris from 1988 to 1991. In May 2012, Hollande became the seventh president of the French Republic.

Share on:
HE François Hollande, President of France, on the historic ties between Lebanon and France.

This year I visited Beirut for the second time since I took over the presidency of the French Republic. The first time I came to Lebanon in 2012, I was received by then-President Michel Suleiman in the middle of an already delicate context for Lebanon. This time around I returned to an adverse context under which the Lebanese people have learned to survive. The ever-threatened security, war at its doorstep, terrorism, and economic difficulties sieve over Lebanon once again, hence I wanted to demonstrate France’s solidarity with this country. Although solidarity is a feeble word, what France feels toward Lebanon is friendship. During my stay I had the chance to visit the residency of the French Ambassador to Lebanon, a historic site for French-Lebanese relations for this is the place where in 1941 General Charles de Gaulle expressed his love for this nation. He had stated that the “Lebanese are the only people whose heart has never stopped beating at the same rhythm to France’s heart,” just as today French people’s hearts beat every time Lebanon is threatened. This was a reality once again when last November Lebanon suffered a terrorist attack just a day before France experienced one of its own for both countries represent in their particular way the values of freedom, pluralism, and tolerance.

I traveled to Lebanon to mark my respect for the Lebanese authorities and notably to Prime Minister Tammam Salam, who has repeatedly overcome the testing circumstances he has faced. His government has been able to lead Lebanon in the midst of difficulties; he has been able to assure his country’s security and to equally welcome over 1.5 million refugees. His government has shown a great human solidarity toward the refugees, and the world has sometimes forgotten the pressure this has implied to Lebanon itself.

I want to remind Prime Minister Salam that France has taken a new initiative to reunite the international assistance group to Lebanon to mobilize the international community as much as we can to guarantee the stability of Lebanon. France has played a key role in solving this conflict. Furthermore, we need to show that it is possible to restore a country just as Lebanon did in the past, with a sense of reconciliation and equality that gave Lebanon a new image before the eyes of the world.

The refugee crisis is not for Lebanon alone to solve; it is a global responsibility and one that concerns Europe and France. For over four years, Europe believed the Syrian crisis would not have any direct consequence on our internal situation. This blindness impeded the international community from mobilizing promptly to put an end to this conflict. In this sense, to alleviate the crisis in Lebanon by maintaining its stability and sustaining the refugees is also a sign of self-assistance for Europe to keep control of our borders whilst continuing to provide asylum. This is why I decided to extend France’s assistance to Lebanon to face these challenges with a monetary contribution of EUR50 million during 2016 and an additional EUR100 million in the course of the following two years. But our contribution does not finish there; we will also reinstall refugees based in Lebanon to France. In 2015 1,000 refugees were reinstalled through the mechanisms we implemented, and we will receive 2,000 more in 2016 and 2017.

We also hope Lebanon can find a solution to its political impasse by electing a new President. When solid institutions are missing, risks arise in any country, particularly when the threats are so evident. This sovereign decision has to be taken by the Lebanese parliament, and we hope it will do so soon as this is in the interest of its nation. I trust the Lebanese parliament will not only find a quick solution to elect a president, but also form a government of national unity and proceed to legislative elections.

We have also assured the security of Lebanon through mechanisms such as UNIFIL, which has been here for a long time. France will continue its efforts to maintain UNIFIL to grant Lebanon the necessary military capacities the country needs to protect and defend itself. The Lebanese army has shown its will and capacity to fulfill its duty and we have committed to immediately contribute the material means and the training needed enforce them.

But overall, we have an extensive French community in Lebanon at the core of this vast bilateral relationship. They hold a deep love for both countries and are the ultimate representation of our mutual values of freedom, pluralism, and tolerance. Today we have a solid economic relationship with Lebanon because of them. Our community also works in favor of the French language, with 41 institutions lecturing programs in French and over 55,000 Lebanese students being educated in our language. We also have a strong cultural and artistic exchange with artists moving between both countries. Both countries have a strong sense of innovation and creative mind-sets, and we incorporate these young talents in projects such as FrenchTech, an incubator for startups.

France and Lebanon have deep-rooted ties cemented in their friendship. We will stay by Lebanon’s side because we love Lebanon; a sovereign and independent Lebanon, a plural and multi-confessional Lebanon. An open Lebanon to the outside so Lebanon stays forever close to France, and France always by Lebanon’s side.