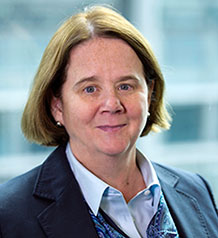 Janet Heckman was appointed Country Director for Kazakhstan for The European Bank for Reconstruction and Development (EBRD) in July 2012. Prior to EBRD Janet worked for Citigroup as a Managing Director in corporate banking for 32 years in seven countries, including the UK, Algeria, Bulgaria, Romania, Hungary, Greece, and Bahrain. She was Vice-President of Amcham in Romania and on the board in Bulgaria.

Share on:
"Infrastructure is absolutely critical both for Kazakhstan and trade."

What landmarks and achievements have characterized EBRD’s role in Kazakhstan over the past 20 years?

EBRD is the largest foreign investor outside of the oil and gas sector, with investments in the country now exceeding $7.2 billion. Last year marked a landmark in our relationship, as we signed the Enhanced Partnership Arrangement with the Kazakhstani government. As did major international financial institutions. The Kazakhstani government allocated almost $2.7 billion for co-financing along with EBRD and other international financial institutions. EBRD expects in excess of $1 billion in investments this year, and as of the end of August, we have already seen more than $600 million. Active projects we are working on include agribusiness, manufacturing, industry, minerals and mining, oil and gas, pharmaceutical sectors, financial institutions and SMEs as well as municipal infrastructure. We have also spread across Kazakhstan, and we are now working actively in nine regions. We currently have offices in five cities outside of Almaty and Astana, and plan to open in Karaganda in the last quarter of the year. In addition to traditional EBRD-type banking type activities, where we either take debt or equity, we also have our SBS, or Small Business Services (previously called the BAS Program), that is now all but fully funded by the Kazakhstani government. We have $30 million as a part of the enhanced partnership program for five years, which currently helps fund roughly 25 people who work throughout Kazakhstan, providing consulting services to SMEs, including anything from balance sheet structuring to marketing plans, etc. As part of this program in September we launched the $41 million Women In Business Program, which will provide funding and advisory services to over 2000 Women lead enterprises.
EBRD has been active in policy dialogue with the Kazakhstani government. We are focusing on Energy Efficiency and Green Economy Astana International Financial System and Financial Sector Reform, and PPP development .Wee worked with IFC in coordination with the Kazakhstani government on the first PPP, which was the successfully tendered ring road around Almaty.

What’s the value of this and other major PPP projects?

It is valued at approximately $700 million to $1 billion. It is a landmark project that will pave the way other projects such as healthcare PPPs. We participated in meetings with the Ministry of Health and the Government, and we hope to launch the first large healthcare PPP early next year in Almaty. We also put in place a landmark $200-million project to finance SMEs through banks in Kazakhstan. An important part of that project is helping to train risk-management teams in the banks that we work with so that we do not end up with new non-performing loans. We are also working closely with the National Bank on Astana International Financial Center project. We see this is a key driver of reforms in the country. What is unusual about Astana International Financial Center is that will be one of the only two such centers in the world where the language used will not be the native language of the country—it will be English, like in Dubai. It will also have English legal system. Parliament is expected to approve the first steps necessary to amend the constitution to allow this. There are so many different laws and constitutional changes; it is an exciting and innovative move.

There is clearly a lot going on, with 182 projects to date in Kazakhstan. Why is Kazakhstan such an appealing market for your shareholders?

Right now, this country is an appealing market because of the evidence of the reform movement and the drive for reform. In almost all sectors there is unprecedented change. You have the new investment legislation that is coming, coupled with the new money market and industry regime as well as the taxation code. Second, there are few places in the world where there is still a positive GDP right now, and we are still predicting 1.5% GDP growth even after the devaluation. One of the key areas is logistics and transport. Whenever I speak to foreign investors, people always ask me what are the key areas to invest in, and I would say anything related to transport, logistics, and construction materials. Kazakhstan is in close proximity to China and Russia, and Iran is about to open up. The sheer size of the country and the fact that so much of the infrastructure has been inadequate and untouched for so long offer significant opportunities for those looking at investing in Kazakhstan.

What potential do you see in developing the country’s infrastructure?

Infrastructure is absolutely critical both for Kazakhstan and trade between China and Western Europe. There are 135 million people living in the area of China next to Kazakhstan, and there is a government policy in China to move more of the population westward. If you look at the markets for Kazakhstani products, interestingly enough, Kazakhstan is the number one producer of wheat flour. And if you look at the direction they are exporting, it is to places like Uzbekistan, Central Asia, northern Iran and western China. There are 21 airports in Kazakhstan, and many of them need infrastructural developments. Investments are needed across seaports on the Caspian, the rail network, and the air. We are also investing in Astana airport, developing a runway project for the new airport terminal for 2020. Regarding municipal infrastructure, we are involved in nine Oblasts. In Kyzlorda we are working with the Akimat on a complete municipal framework including district heating, waste management, water treatment, street lighting, and municipal transport. In Almaty, you can see the results of what we have completed, including 400 CNG buses and 200 trolley buses. Environmentally friendly modern transport is absolutely critical and makes a real difference in the daily lives of people.

What sectors of the Kazakhstani economy are showing most promise to EBRD?

We had been doing little in the agribusiness sector until this year, and it was the theme of the foreign investors’ council meeting, which was held in June between the President of Kazakhstan and EBRD’s president Sir Suma Chakrabarti. We have made several investments in agribusiness, including the edible oils area. We are also looking at poultry as well as food retail and processing. We recently allocated a $50 million loan to RG Brands, one of the key local agribusiness producers. We were able to lend them in tenge, which helps them to continue their growth and expansion in the sector.

We expect that the economy will grow by more than 2%, and that EBRD will funnel close to $1 billion. While most of our investments are in the private sector, we work very closely with the Government, and the National Bank of Kazakhstan. We see that there is a wealth of activity and opportunity here for us. One of the key things is that most of our team in Kazakhstan are locals, and we are a small handful of expats. It is important to have such a talent based in Kazakhstan. We have people working with us who have graduated from the best universities in the world, and this enables us to operate successfully in the country. We really feel that in Kazakhstan we are partners with the government.