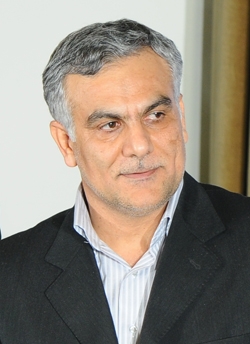 Hamid Arabnejad obtained a degree in Mechanical Engineering in Iran. He then pursued a career outside of the aviation sector before assuming the position of President and Board Member of Mahan Air in 1996.

Share on:
Mahan Air is the first private airline in Iran. How would you appraise the Iranian aviation environment? Iran is an enormous country in size. Its land area is larger than […]

Mahan Air is the first private airline in Iran. How would you appraise the Iranian aviation environment?

Iran is an enormous country in size. Its land area is larger than France, Germany, Italy, the UK, Austria, Denmark, Belgium, and Switzerland combined. The country has a young population and large expatriate communities settled in Europe, North America, and Australia. Domestic passenger traffic has increased by an average of 7% over the last 10 years, and at the same time international air travel in Iran has grown by a robust 9% per year, which is far above the world average. We are optimistic that this growth trend will continue for at least the next few years.

In 2011, 27 million travelers and businessmen passed customs. What can Mahan Air offer to the increasing number of business travelers with respect to service and quality?

Iran is indeed a very competitive market, and many of the 37 international airlines serving Iran are among the top-ranking carriers in the world. Mahan Air tends to concentrate on quality more than price, and this strategy has been successful as our market share has increased over the years. We welcome each new international airline that will push us even harder to be competitive. We have a couple of domestic competitors as well as a few formidable ones in international markets, and we have to expand our loyalty base to stay competitive.

What are the highlights of your airline’s evolution, and how do you shape your competitive strategy vis-í -vis your main competitor?

We were established in 1991 as the first private airline in Iran and our real growth and gaining competitive edge became possible after the acquisition of our first wide-bodied Airbus in 1998. We do believe that investing in the development of our staff to provide good services before, during, and after the flight will lead to positive feedback for us through word of mouth and generate more customer loyalty, which is a great advantage over all of our competitors.

“Mahan Air tends to concentrate on quality more than price, and this strategy has been successful.”

Mahan Air has 28 destinations in 12 countries. Where do you see the highest demand?

In the domestic market, the demand between Tehran and Mashhad is the highest, with over 700,000 passengers carried annually. We also carried more than 330,000 passengers between Tehran and Dubai in 2012, making it the most popular international destination for us. As for growth potential, Turkey has shown strong performance with a 20% increase in traffic figures over the last few years, and we intend to focus on this important market in the near future.

In mid-August 2012, Mahan Air launched a new international route to Kuala Lumpur. What does this new route mean in terms of the business flow between the Iran and Malaysia?

There is a good relationship between these two Muslim countries. I believe that we will see huge traffic flows between Iran and Malaysia. We need at least two daily flights to Kuala Lumpur because there is huge potential on this route and our aircraft are already booked. The market is thirsty for new destinations, especially in the Far East.

In close to 20 years of operations, Mahan Air has been successful in carrying close to 29 million passengers without a single fatality or injury. This is the result of our relentless safety efforts and our “safety first” policy within the entire organization. I believe that in the competitive environment of the airline industry, the development and implementation of quality services that corresponds with safety does hinder an airline’s success; this is one of the challenges that we are facing on a daily basis. However, Mahan Air has been successful in this objective. This is evident in our achievement in reducing delays over the last five years. An internal audit as well as independent audits also show that our level of safety has improved substantially over the same period.

What is your economic forecast for the medium term?

In a balanced field and more usual circumstances, the level of economic performance depends on global economic trends. However, in Iran—a country famous for its independence from the global economy—the exchange rate and fiscal policies of oil as well as inflation will determine economic growth. We hope to see a breakthrough in Iran’s relationships with the EU and others, which will result in the decreasing or lifting of sanctions. In macro-economic terms, although the reduction of energy subsidies has caused high inflation in the short term, I believe the efficiency gains will be positive in the medium term, leading to more growth.