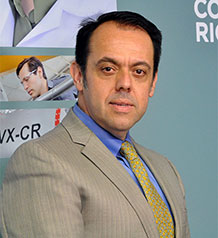 Alexander Mora has been in his current position since May 2014. He has extensive experience in trade, banking, and digital technologies. He is also a representative of Costa Rica to the UN Commission on Science and Technology for Development. He has a degree in economics and holds an MBA in finance and banking from the University of Costa Rica.

Share on:
"Costa Rica has in place 14 FTAs comprising trade with 50 commercial partners."

What is the current status of Costa Rica’s accession to the OECD?

Costa Rica approached OECD seven years ago and, since then, has embarked on a process with six main phases. First, Costa Rica worked closely with the OECD to demonstrate its like-mindedness with the organizations and its potential as a member country. Because of these joint efforts, Costa Rica executed an action plan agreed with the OECD with the aim of evaluating the position of the country in some strategic areas. This second phase required an exhaustive gap analysis to identify key issues to be addressed in order to become a member of the organization in some areas such as public governance, competition, investment policy, and vocational education and training. Costa Rica’s reputation and capabilities have shown that the country, as a pioneer in cutting-edge policy, has immense potential to contribute to the OECD. As a result, the third phase started when the OECD Council decided to formally invite Costa Rica to start its accession process and approved the accession roadmap in 2015, which sets the terms and conditions of this process. Since the accession process is well structured, and the OECD has a well-defined road map, Costa Rica is now implementing its fourth phase. This phase includes the preparation of an Initial Memorandum and the execution of the 22 accession reviews defined in the roadmap. It is my role to be the coordinator of the process. The Ministry of Foreign Trade has been appointed by the President to lead this important goal. Costa Rica is committed to update and upgrade our standards, our public policies, and our practices, in the context of this major transformation process. Improvements at two main levels will be required; the efficiency of public policy and markets are key elements to improve the wellbeing of our citizens. The next phase is the implementation of the recommendations derived from each accession review to achieve the 22 positive formal opinions from each committee in the OECD. In order to do so, we have been putting in place all the efforts and resources needed to be able to complete this fifth phase by the end of this administration in May 2018. Still, since the last phase includes the approval of the accession protocol by the Legislative Assembly, its completion will be left for the administration to come.

The Ministry of Foreign Trade works to increase trade internationally. What are the main free trade agreements you are working on right now?

Costa Rica has in place 14 FTAs comprising trade with 50 commercial partners. The FTA with Colombia, which entered into force on August 1, 2016 is our most recent FTA. In addition, there is an ongoing FTA negotiation process between Central America and South Korea, which is expected to be concluded by December 2016. Hence, our road map in this area has a specific approach basis. Our political definition is focused on completing FTAs, bilateral investment protection agreements, and/or double tax agreements, preferably with all OECD countries and some selected additional countries. This is our main priority, and yet we have also identified opportunities in terms of both investment and trade with some specific countries such as the GCC states of Qatar, UAE, and Abu Dhabi, Kazakhstan, and some countries in South America. In Africa, we still need to complete our due diligence to identify the right country or countries to start our trade penetration. Those are the areas where we are the most active. In regard to the Pacific Alliance integration process, it is an initiative for which we are in the phase of studies. It is important to take into consideration that as our trade policy matures and evolves we need to gradually pay closer attention to those sectors that may be challenged by trade openness. Some countries, such as South Korea, the US, Canada, and European countries directly support their sensitive sectors, especially agriculture. They do not support them through tariffs, but rather by providing the type of internal support that complies with World Trade Organization provisions. We are committed to exploring and to developing a similar model, and we are in the final stages of preparing this proposal, which will be shared in the coming months with the productive sectors and the rest of the cabinet.

Exports in Costa Rica increased 7% YoY in the first semester 2016. According to forecast, the country will export at least USD10.8 billion in 2016, 12% more than 2015. What is your outlook for the year ahead?

Costa Rica was one of the two Latin American countries where exports increased during the first semester of 2016. Certainly, we are on the right track to meet our national targets, and for the time being I do not foresee any condition that may prevent us from achieving the goal. Brexit and the US elections are of course giving us some bumpy feedback, but I do not expect a significant change in the current international trade scenario. I feel confident and optimistic that we will reach a two-digit growth rate in exports, as forecasted. Specifically, the 7% number includes solely the exports of goods, while the 16% growth rate comprises exports of goods and services, as the latter is the main driver. We are optimistic that exports will achieve a two-digit growth rate in 2016 and everything looks aligned; therefore, we do not foresee any surprises on the horizon.

What are the Ministry’s priorities for 2017?

Our main priority is clearly the OECD accession program, followed by the improvement of the trade platform by this strategy to negotiate FTAs, bilateral investment agreements, and/or non-double-taxation agreements preferably with all OECD countries plus six or seven other strategic countries. Internal discussions on the Pacific Alliance will probably continue in 2017; nevertheless, we still need to complete some internal analysis regarding this initiative and some political goals before moving to the next stage, so I’d rather be more conservative and cautious with its pace. Even though the majority of Congress supports the Pacific Alliance, the truth is that the priority at Congress is devoted to fiscal reforms. We require fiscal reform to access public funding to be able to join the Pacific Alliance in a win-win situation. Of course, active promotion of trade and investment, which is transversal to what we do and is a significant piece of our agenda, also has high priority in our 2017 planning.