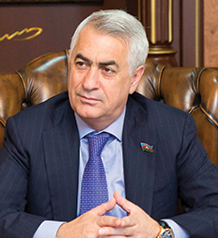 In 1985, Javid Gurbanov graduated from the Azerbaijan Construction Engineers Institute as a Mechanical Engineer. He previously held the role of Head Director of Auto Transport Unit of Ministry of Agriculture and Food, but started his career in the transport sphere as the Chief of Supply Department of Baku section of Azerbaijan State Railways in 1995, and from 2007 until 2015, he worked as the Chairman of Azerroadservice OJSC of the Ministry of Transport of Azerbaijan Republic. He was appointed as Chairman of Azerbaijan Railways in February 2015.

Share on:
TBY talks to Javid Gurbanov, Chairman of Azerbaijan Railways CJSC, on the Baku-Tbilisi-Kars railway, its potential for Azerbaijan and neighboring countries, and exporting passenger cars.

The Baku-Tbilisi-Kars (BTK) railway plans to become one of the major railway lines in the region. With the line set to be fully commissioned at the end of 2015, at what stage is its development now?

The economic changes initiated by Heydar Aliyev and successfully continued by President HE Ilham Aliyev have brought our country success and facilitated its rapid economic development. As is the case with all other areas, major projects have been implemented in the transport sector, and there have been successful upgrades and modernization in Azerbaijan’s transport infrastructure. Azerbaijan’s integration into the global economy is well under way. The railway, which is one of the main branches of the country’s transport system, is undergoing a period of rapid development as well. Work is currently in full swing on the implementation of the new BTK railway, which is considered to be one of the major construction projects of the 21st Century, not just linking three countries, but also playing the role of a bridge between dozens of peoples and nations. The rail laying and overhaul process on the territory of Georgia has already been completed. A construction train is running to the Georgian station of Kartsakhi on the border with Turkey. Due to the upcoming change of one track for another, completion work is now in progress on the replacement of rail trolleys at Akhalkalaki station and the Marabda-Turkish border (Kartsakhi) site. The construction of the Turkish section of the 4.4km tunnel linking Georgia with the Turkish Republic has also been completed. The BTK railway is scheduled for commissioning in 2015. Azerbaijan Railways maintains and enhances its infrastructure to enable participation in international and regional projects in addition to addressing the demand for railway transportation. These projects will bring stability, prosperity, and economic dividends both to Azerbaijan and the whole region.

Kazakhstan and Afghanistan have demonstrated interest in joining the BTK railway project. What is the potential for other countries to be involved?

The BTK railway is expected to provide a significant boost to the development of trade and economic relations in Eurasia. It will create ample opportunities not only for the three countries involved, but also for other countries, such as Turkmenistan, Kazakhstan, Afghanistan, Pakistan, China, and India, to establish transport links with each other. The implementation of the BTK railway project and the construction of a railway tunnel under the Bosphorus in Istanbul will provide linkages between Trans-European and Trans-Asian railway networks, thus enabling passenger and cargo transportation from Azerbaijan, Georgia, and Turkey to Europe and Asia, expanding the transit potential of the entire region, speeding up the process of European integration, and broadening Azerbaijan’s economic relations with foreign countries.

Another important railway project is the North-South Transport Corridor. What is the role of Azerbaijan in supporting its continuing development?

Our country is heavily involved in this process. The issue of merging the railways of Russia, Azerbaijan, and Iran was discussed at the 61st meeting of the CIS and Baltic Railway Council held in Baku in October 2014. The construction of a railway line between the Astara in Azerbaijan and the Astara in Iran has been envisaged within the framework of the North-South international transport corridor, linking the railway networks of Azerbaijan and Iran. As part of this project, Azerbaijan will build an 8.4km railway line and four station tracks each 1,050m long. Land has already been allocated for the construction. As the volume of transit increases in the future, further measures will be taken.

Ganja City Railcar Manufacturing Plant plans to export passenger cars. When is this likely to begin, and what is its importance in the development of Azerbaijan’s transport sector?

President HE Ilham Aliyev, on October 18, 2014, attended a groundbreaking ceremony for the Stadler railcar manufacturing plant in Ganja. Switzerland’s Stadler Rail Group and Azerbaijan’s Railway International Distribution signed an agreement on the establishment of a railcar manufacturing plant in Ganja. Under said agreement, a plant with a capacity of 60 railcars a year will be built in Ganja. The plant will be fitted with cutting-edge equipment from Switzerland. It will cover an area of 20 hectares and operate in line with advanced environmental standards. The plant is expected to become operational in 2016. The launch of the plant will herald a new phase in the railcar depot of the Azerbaijan Railways. The leadership of the country has recently adopted a number of decisions and signed several executive orders on the future development of the railway as one of the key components of the transport system. These decisions have created a watershed in the development of the railway. The most important of the documents is the State Program on the development of railway transport in the Republic of Azerbaijan signed by President Ilham Aliyev on July 6th, 2010. The implementation of this is currently underway as the entire railway infrastructure is being upgraded. One of the central components of these activities is the renewal of the railcar infrastructure. It is no secret that most of the railcars currently operated by Azerbaijan Railways have long outlasted their service life, and we are currently using the resources of railcar repair plants of different countries to keep them operational. In the last few years alone, we have had 85 railcars repaired at plants in the Russian Federation and Ukraine.

To what extent have international events such as the upcoming first European Games prompted the development of transport infrastructure, and what is your outlook for the sector?

In recent years, Azerbaijan has become a venue for a number of international and regional events. Our capital Baku will soon play host to the inaugural European Games. This places tremendous responsibility on all relevant agencies of the country. The Transport Ministry of Azerbaijan has developed a specific action plan in relation to the First European Games, and we have a number of specific objectives to meet under this program. The Games are expected to bring together representatives of 49 countries, and the main transport hubs to be used are Heydar Aliyev International Airport, the Baku railway station, and automobile transport infrastructure. We will do our best to meet the objectives ahead of us.