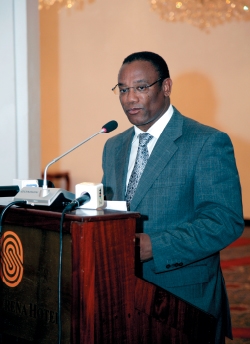 Minister of Planning and Development, Mozambique

Aiuba Cuereneia has been the Minister of Planning and Development since 2005. In addition, he is the Governor of Mozambique at the World Bank, African Development Bank, and the International Fund for Agricultural Development. He previously worked at the Ministry of State Administration and was Vice-Minister between 2000 and 2004. He has a degree in Economics and Management from the Eduardo Mondlane University in Maputo.

Share on:
What role do you see international investors playing in Mozambique’s long-term economic development? Mozambique has become a prime destination for investment. Foreign companies started in the country by looking for […]

What role do you see international investors playing in Mozambique’s long-term economic development?

Mozambique has become a prime destination for investment. Foreign companies started in the country by looking for opportunities in coal and natural gas. Since then, we have been welcoming investors from around the world. Now, we are raising awareness that Mozambique is not all about coal and gas. The country boasts other business opportunities in agriculture, energy, and infrastructure. Due to our privileged geographical position, we have corridors that provide access to landlocked parts of Africa. In coal and gas, there are opportunities beyond production, especially in the downstream chain and logistical backbone. One of the reasons investors come to Mozambique is the stability the country enjoys; we have macro-economic, political, and social stability. These are key attractions for any investor and boost our own development.

Has Mozambique met its FDI targets? What are your goals for 2013?

We’ve been successful in meeting our targets each year. Our FDI has reached levels of between $1 billion and $1.8 billion annually, not including coal and gas. We are now aiming for $3 billion in FDI across the spectrum. Huge public investments have been made to overcome the infrastructure deficit. Our projects include the power transmission “backbone” from north to south and a hydropower generation facility in the north of the country. Regarding logistics, we have plans to build railways that provide support for the transportation of coal mining. These projects are valued at around $6 billion.

What are your main priorities in the medium term?

Our top priority is to invest in agriculture, because more than 70% of our people are living in rural areas and are engaged in the sector. The second top priority area for Mozambique is vocational training. We have several projects geared toward capacity building. The preservation of national unity will rely on a great deal of engagement from our citizens. This participation will depend on the development of their skills. A third priority is infrastructure: access roads, national highways, and rural roads that can ensure the movement of both people and goods in the country. The current coverage of the national grid is 36%—we need to see more Mozambicans enjoying the benefits of power. Production levels will also increase with greater access to electricity. A fourth priority for us is investment in the healthcare sector, where we are mainly addressing child mortality and endemic diseases.

“Our top priority is to invest in agriculture, because more than 70% of our people are living in rural areas and are engaged in the sector.”

What is the significance of the Zambezi Valley project for improved agricultural development and investment?

It is said, “He who owns the Zambezi Valley has every resource.” We have been focusing on the Zambezi Valley because the region has the potential to become the breadbasket for the country and its neighbors. The specific mission for our agency is to conduct technical and feasibility studies, as well as provide support for the government as it identifies fundraising projects, gathers financial resources, and dedicates investments to the provinces. For example, we have a basin in Moatize where coal is exported from ports such as Beira or Nacala. We believe that the communities living along those railways can also benefit from the existence of that infrastructure, instead of just watching trains go back and forth. The members of each community should also be able to ship goods to any of those business hubs. Our agency aims to encourage the government to approach infrastructure planning in a global and integrated way.

To what extent are development funds from BRIC countries important to Mozambique’s development?

Most of our funding comes from the World Bank, the African Development Bank, and Europe. However, considering the crisis in Europe, we realized a need to access other sources of funding. In seeking other sources, we have discussed opportunities to work with the BRICs—except Russia, a country that has not initiated donations to Africa yet. We have been enjoying great support when it comes to funding, but in a country like ours it is advisable also to look for concessional funding. Therefore, we have to strike a balance between concessional and non-concessional loans.

How will funds from coal and gas exports be used to create sustainable development across the country?

We have been blessed with the discovery of new resources in 2012. In addition, we have the Congo, Liberia, and Angola to learn from; our agency will focus on avoiding previous mistakes to ensure that the resources in Mozambique are being used for the country’s development. The resource management team should act in line with the will of the government and the country. That will challenge us in terms of legislation, especially as we work to ensure transparency in the extractive industries. Our focus is on the management of resources that will begin pumping funds into the state budget.

How is the Ministry of Planning and Development working to encourage international investors to develop value-added products in Mozambique for export?

When companies come here, their flagship is to provide support to the government—but at the end of the day, they are here to maximize their profits. This means that the government of Mozambique is working to enforce legislation that ensures that these activities are benefitting the country. In this way, Mozambique will not be exporting raw materials, but instead adding value locally. This processing will add value to the economy and provide more jobs, which will generate more revenue and engage local companies downstream and boost profits. We are working toward that goal.

What specific incentives are in place to encourage value-added production?

We offer favorable tax incentives for private investments. In terms of natural resources, these tax measures are lowered. In the post-war period, we had to provide a lot of tax advantages to Mozal, which became a kind of calling card to present to other countries and painted a picture of Mozambique as an investment-friendly country with a positive environment for investors. For current investments, we enforce a regulatory framework based on established international standards. Special tax incentives for goods that are produced exclusively for export still exist. To this end, there are also special economic zones (SEZs) and industrial free zones in the country. There is definitely no company, megaproject, or natural resources production activity that will become duty free.

How would you evaluate the success of these zones in encouraging companies to come to Mozambique and launch value-added production?

These zones are experiencing excellent growth. We have experience with Nacala, which is seeing growth in terms of FDI and local investment levels. We operate an industrial park close to the smelter, which is also enjoying substantial growth. In summer 2012, we established another duty-free industrial area in Beira. This zone aims to provide logistics for hinterland countries, and has demonstrated remarkable growth. In 2010, we made an initial investment of $5 million in the SEZs. The project has shown promising results, and we are very hopeful that there will be many more investments in the future.

What level of involvement does Mozambique have within the Southern African Development Community (SADC) infrastructure plan?

Without Mozambique, this infrastructure development plan would not be in place. The majority of the beneficiary countries are landlocked, and therefore rely on us. We consider it our responsibility to increase the quality of services we provide to landlocked countries. Following the approval of the SADC infrastructure plan in Maputo, it has become much easier to raise funding both locally and throughout Africa as a whole, as well as from the African Development Bank and from our multilateral partners. This project was carried out because Mozambique is enjoying a competitive economic advantage. We aim to raise approximately $10 billion for the SADC as a whole, a figure that is required for the improvement of infrastructure. This will ensure that the SADC countries run smoothly in the forthcoming years.