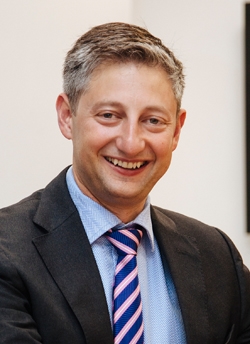 Adam Prince joined BG Group in 2004, and has occupied a number of key roles. These include Regional Strategist in Houston, Asset Manager in Trinidad, and various roles in BG’s Europe organization including Armada Offshore Installation Manager, leadership of a large asset swap, a role in the general management of BG’s Operated Assets in the North Sea, and Change Manager during the creation of the Europe E&P asset through the integration of BG’s Scottish and Norwegian businesses. He has been in Tanzania since February 2013.

Share on:
"We’ve formed a consortium to develop a joint LNG project."

How would you assess the importance of BG’s assets in Tanzania in relation to BG’s overall strategy?

Tanzania is a great example of how BG works to its competitive advantages. Our group strategy focuses on the exploration and LNG segments. We entered Tanzania in 2010, driven by an exploratory analysis of the country’s suitability and potential for exploration success, and natural gas exports to customers in Asia, where demand for energy is growing strongly. In addition, we saw an excellent opportunity to meet Tanzania’s growing domestic energy needs. The early exploration work we did indicated that there were some potentially very large gas-prone basins, and to date we’ve made multiple discoveries, with total gross recoverable resources of around 15 trillion cubic feet. We’ve also made good progress on the proprietary work needed to progress the selection and acquisition of a site for an LNG terminal. This puts Tanzania squarely among the leading opportunities BG Group is pursuing, alongside Canada and the US, to expand our LNG business. We focus on identifying exploration opportunities early, moving swiftly to make discoveries, and then developing world-class LNG projects and supplying LNG into our global LNG marketing business. We’re still at an early stage in Tanzania, but we’ve made an encouraging start.

What are your short-term expectations regarding your ongoing exploration activities in blocks 1, 3, and 4?

We’ve had a 100% success rate with offshore Tanzania so far, succeeding in 15 out of 15 wells since 2010. That’s really amazing in this industry, where exploration wells often have a success probability of 10%-20%. A total of 10 of those were discovery wells, and the other five were appraisal wells, and we’ve also performed three successful drill stem tests on those discoveries. These have proven sufficient resources for a two-train LNG project. We’re currently conducting further appraisal and exploration work, and we’ll be moving on to preparing for another phase of exploration, probably in 2016 or 2017. So we’ll be doing a lot of preparation work for that next campaign. What’s really exciting is that, in addition to our exploration work program, we’re now moving ahead with what we call the “select phase,” where we conduct careful analysis of different options for developing the proven gas resources we have. This includes detailed design to determine the best configuration for our offshore and onshore facilities, as well as maturing the commercial structure of the entire project. Our joint venture partners, including the Tanzania Petroleum Development Corporation, and also various government agencies, will be involved in maturing the commercial structure, with the signing of these agreements targeted for 2015. Overall, I’m proud of everything we’ve achieved to date, and I expect the next 12 months will be an exciting and pivotal period.

How can Tanzania fully realize its vast potential as an LNG exporter?

We have a very large upstream project that we’re progressing and developing, and we’ve formed a consortium to develop a joint LNG project. That’s between ourselves and our partners (Ophir Energy and Pavilion Energy) in block 1, 3, and 4 and with the consortium for block 2, which is Statoil and ExxonMobil, which have also discovered significant gas resources. In 2012, the government asked us to explore the opportunity of building a joint LNG plant. It’s a great opportunity for everyone involved because it saves on costs and it’s a more efficient solution. So we’re working with officials on that, and we’ve now agreed with those five companies and the government that we will work together on the feasibility of that energy project over the next couple of years, and BG will take a lead role in that consortium. We’ve established a joint venture team with representatives from all organizations. We have an office here in Dar es Salaam and also one in London for that joint venture to progress the work. I’m also very excited by the way that in both the joint venture for the LNG plant and the upstream operation, we’re working very carefully and closely with Tanzania to help build a platform to maximize Tanzanian involvement in the project, and use the capacity of Tanzanian institutions and local companies to construct and operate the project.

“We’ve formed a consortium to develop a joint LNG project.”

How is BG Group working to further increase its level of local content?

We’re dedicated to improving livelihoods and supporting development in Tanzania through our investment activities. We’ve only been here a few years, but we’ve already made some strides there. BG has established a dedicated offshore drilling supply base in Mtwara in collaboration with Ophir and Statoil. As part of this we have upgraded the port in Mtwara in collaboration with the Tanzanian Ports Authority (TPA), investing about $40 million, 70% of which has been invested through Tanzanian-registered companies. That involved working with them to make sure they’re able to meet international oil and gas safety and quality standards. That’s been successful, and it’s a statistic we’re very proud of. We’re committed to continuing to work with the local government and companies in Tanzania to maximize local content throughout our operations while maintaining the safety and quality standards that we expect. There are things we need to do to make that happen, obviously, as it isn’t going to happen by itself. We have a big part to play, as has the government and other institutions. The key is to have the human capacity to take this on. So we’re taking an education pipeline approach to that, and we have a number of social investment initiatives to support this approach. It’s important to get young people interested in the key disciplines that are important in oil and gas, so we have a partnership with Young Scientists Tanzania (YST), which runs a science competition in schools in all regions of Tanzania. The final factor starts at home; we have a lot of national staff in our organization, and a point we’re particularly proud of is our international graduate development program. In the past two years we’ve recruited nine Tanzanians from universities. They then go on a two-year program where they work in three to four other countries that are part of our international operations around the world. After that they move into roles within the company. We have also been providing scholarships for higher education in science-related studies. From 2012 to date, 14 students have been sponsored to pursue Master’s studies at British universities. Areas of study include Geographic Information Systems (GIS), Petroleum Engineering, Petroleum Geophysics, and Oil and Gas Chemistry. From 2012 to date eight students have also been sponsored to pursue Master’s studies in Materials Science Engineering at the Nelson Mandela Institute of Technology in Arusha.

What are BG’s short-term goals in Tanzania?

The key for us is finding the right options for developing our proven gas resources. We’ve got the gas, and we know what we’re going to do with the gas. We just have to figure out how we’re going to connect those two things together. We need to choose from several options for accomplishing that, and that’s our key objective for 2015. This includes selecting some options, and then doing some detailed design work to develop the best configuration for our upstream and LNG facilities. Once that is complete we will be preparing for the bidding, evaluation, and award of the contracts for the detailed design of these facilities. We’ll also be making concrete steps in maturing the commercial structure of the entire project with the government and our joint venture partners. So that’s the next big challenge, and it’s a very exciting period for us.

What is your long-term outlook for the sector in general?

Natural gas projects are complex and costly and they can take many years to develop. And so for BG, the next step means doing rigorous assessments and studies aimed at understanding the full impact of the investment that we plan to make, not just on the technical side but also in terms of the social and environmental impact we have on Tanzania. We’ll be looking at those very carefully to make sure that we select measures that either avoid or offset any social or environmental impact the project would have. Once that’s all done we can make a decision on whether to proceed with the LNG project, which we expect to be made sometime after the end of 2016, with the first gas produced early in the next decade. The project would have an operational lifespan in excess of 20 years. So in that time period I expect to see, as other countries have, a progressive increase in the participation of the Tanzanian economy in the project. More importantly, I think this project can be decisive in contributing to the government’s goal of becoming a middle-income country by 2025. We’re very excited about Tanzania.