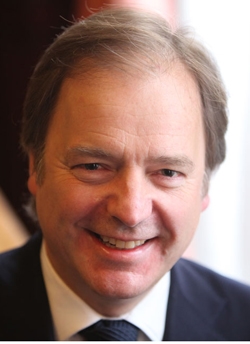 Minister of State for Latin America, the Foreign & Commonwealth Office of the UK

Hugo Swire was appointed Minister of State at the Foreign & Commonwealth Office on 4 September 2012. Besides his geographical responsibilities he also oversees public diplomacy and the GREAT campaign, and prosperity work, including the FCO’s relations with British business. Landmarks of his political career include his election as Conservative Member of Parliament for East Devon in June 2001. He subsequently served in David Cameron’s first Shadow Cabinet as the Shadow Secretary of State for Culture, Media and Sport between 2005 and 2007. He then became Minister of State for Northern Ireland in the coalition Government in May 2010. In 2011, Mr Swire was sworn in as a member of the Privy Council.

Share on:
"The Double Taxation Convention was a really important step."

In what ways has the Memorandum of Understanding (MoU) signed in November 2012 by Panama and UK boosted the commercial relations between both countries?

I was delighted to sign the MoU during my visit to Panama in November 2012. It sets out a shared commitment to strengthening our relationship. But it is not an end in itself; we need to continue to work hard to turn that commitment into results. I visited again in mid-2014 to follow up Panama’s new government following the May elections. I was reminded of the country’s great potential, and of the reasons why so many British companies are already doing business there. The World Economic Forum ranks Panama’s economy as the second most competitive in Latin America, boasting the top-10 global rankings in its airport and port networks, the soundness of its banks, and its access to financial services. That is why the stock of UK FDI in Panama now stands at £1.95 billion, second only to the US. In 2012, for example, we saw the Travelex Group win a concession to operate a foreign exchange bureau at Panama City’s international airport, which was a great boost to trade. This airport is now also being further developed with the help of British firm Foster and Partners. Elsewhere, London & Regional continues to lead Panama’s urban regeneration through its impressive Panama Pacifico project, while Cable & Wireless has launched transformative new products, such as a mobile banking application. Panama is also increasingly positioning itself as a regional logistics and connectivity hub, which is why companies like Diageo use it to get their products closer to the final market. The Scotch Whisky Association reported £58 million of whiskey sales to Panama in 2013, the third largest market in the region and a 15% YoY increase. These examples demonstrate Panama’s growing importance as a commercial partner for the UK in Latin America, and show how the UK has consolidated its position as one of the leading foreign investors in Panama. However, I am convinced that we can do more. The new government has set out its commitment to tackling corruption, and I welcome this. We have found in the UK that foreign investors tend to respond well to certainty and transparency. We are already doing work with Panama to promote a rules-based economic system, and I hope we can cooperate ever more closely in this area.

Following the Double Taxation Agreement signed by Panama and UK in July 2013, you expressed your enthusiasm for the strengthening of the bilateral relations. Which are the economic sectors with a bigger potential for development between Panama and UK?

The Double Taxation Convention was a really important step. It established a new channel of information sharing between the UK and Panama, which we believe could lead to the recovery of up to £1 billion in tax revenues in the UK alone. And as well as improving transparency, it also has the potential to encourage more UK investment in Panama by reducing the tax barriers to cross-border investment and putting UK business on an equal footing with competitors from those countries that already have a similar agreement in place, such as France, Italy, the Netherlands, and Spain. It is a business-friendly treaty that safeguards against tax avoidance and against other issues that can damage trade. This is one example of the work we are doing to boost UK commerce the world over. I think there is particular potential in our partnership with Panama, not least because of the similarities between us. Just as the UK is the gateway to Europe, Panama is the gateway to Latin America. We are both trading nations at heart, with a strong maritime history. I saw for myself the construction of the astonishing new lock at the Panama Canal, which I am sure will cement its position as the world’s busiest trade route. I was able to recall Britain’s own connection to the canal, by unveiling a plaque to commemorate the Herculean efforts of the British West Indian community in its construction 100 years ago.

“The Double Taxation Convention was a really important step.”