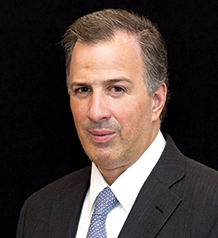 José Antonio Meade Kuribreña received a degree in Economics from the Instituto Tecnológico Autónomo de México (ITAM) and a Law Degree from Universidad Nacional Autónoma de México (UNAM). In 1997, he received a PhD in Economics from Yale University. He has taught Microeconomics and Macroeconomics courses at ITAM and Yale University, as well as courses in Economic Analysis of Law at ITAM’s Master’s Program in Public Policy. His professional career began at the National Insurance Commission. He has since held several high level positions in the Public Sector, including General Director of Financial Planning at the National Commission for Retirement Savings (CONSAR), Deputy Secretary at the Institute for the Protection of Bank Savings (IPAB), CEO of the National Bank for Rural Credit (Banrural) and then of Financiera Rural, Minister of Energy and Minister of Finance and Public Credit. He is currently Minister of Foreign Affairs.

Share on:
TBY talks to José Antonio Meade Kuribreña, Minister of Foreign Affairs of Mexico, on the history of relations between the two countries and how to move forward in the future.

How do you assess the current state of the relations between Lebanon and Mexico?

2015 marks the 70th Anniversary of the establishment of diplomatic relations between Lebanon and Mexico. Our relationship is mature and vibrant, nurtured by constant political dialogue, growing trade and investment flows, and a desire to cooperate in an increasing number of areas of development. Together, we have witnessed seven decades of friendship, solidarity, cooperation, and mutual trust. Relations between Mexico and Lebanon offer a vivid example of hard work, shared values, and building confidence in the future, and our 70 years of common history are witness to that. Endowed with such a legacy, the two countries will now aim higher in this most valued relationship.

What are the main highlights of your visit to Lebanon, and your Lebanese counterpart to Mexico?

I went to Lebanon to further enhance our bilateral relationship, bearing in mind that Mexico is home to close to half a million people of Lebanese origin, an important force in our economy, society, and culture. The Lebanese diaspora is no doubt the most visible and dynamic bridge between our countries today, and will continue to be an essential asset for our shared development in the future. In addition to my visit in February 2015, Mexico had the honor of hosting Lebanon’s Minister of Foreign Affairs and Emigrants, Mr. Gebran Bassil. On that occasion, Minister Bassil and I discussed important bilateral and regional issues, and signed agreements to promote deeper knowledge of our respective societies and cultures. We also agreed on various programs that will draw our respective diplomatic academies closer together, and will also allow us to share better practices in terms of the protection of our nationals living abroad. With my visit to the beautiful country of Lebanon, we followed up on those initiatives and added others to strengthen our cooperation, facilitate our trade and investment relations, turn our markets into preferred entry points to the Middle East and Latin America and the Caribbean, respectively, and promote more frequent parliamentary contacts.

How do you envision the future of the relations between the two countries and what areas of cooperation will you focus on the most in the coming years?

Mexico and Lebanon have enjoyed friendly relations for a long time, and the two nations have profited from this in an important way. However, our level of development and the modernization of our economies offer us great potential and possibilities that we must be able to develop and take advantage of for the benefit of our peoples. Frequent high-level political dialogue is an asset to both countries, which will allow us to identify new areas of collaboration, and successfully address any challenges we may face. Our respective private sectors have also set out to increase their involvement in a number of attractive sectors in each other’s markets, such as agriculture, telecommunications, energy, and pharmaceuticals. To spearhead specific projects, during my visit, a Mexico-Lebanon Business Forum took place in Beirut, with the active participation of key Mexican and Mexican-Lebanese entrepreneurs. Mexico is also aware of the lively cultural scene in Lebanon. Various Lebanese figures, living in this country or elsewhere, have claimed worldwide attention in many fields. This is the case, for example, of writers such as Hoda Barakat, Elias Khoury, and Lena Merhej; designers Nicolas Jebran and Elie Saab; architects Nabil Gholam and Hashim Sarkis; or artists such as Juliana Seraphim, Saliba Douaihy, or the Armenian Lebanese painter Paul Guiragossian. This cultural bloom is also evident in Mexico. We are determined to bring more Mexican culture to Lebanon, and to promote cultural events that will showcase our history, traditions, and current artistic innovation. We take inspiration in Minister Bassil’s phrase “Our border is the world,” the slogan of the Lebanese Diaspora Energy Conference 2014, an event that reinforced the bonds between Lebanese residents and emigrants worldwide. Mexicans of Lebanese origin, and indeed Mexicans themselves, believe borders pose no limits to creativity and community.